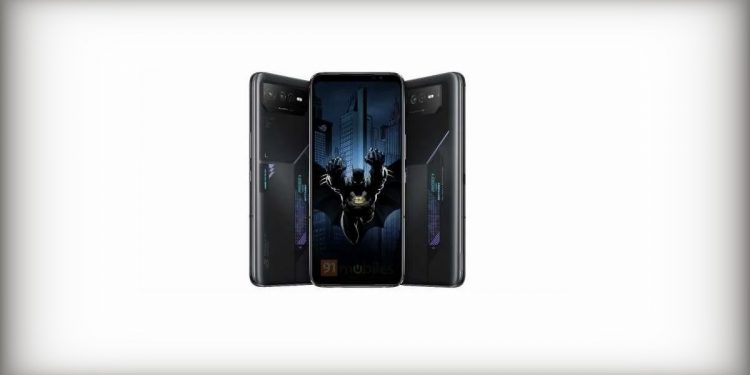 ASUS had introduced the ROG Phone 6 back in July, and now a leaked render of the smartphone’s Batman Edition has been spotted online. Let’s have a look at its design, features, and specifications.

According to the leaked render shared by Evan Blass via 91mobiles, the ASUS ROG Phone 6 Batman Edition comes in black, keeping with the moody Batman theme. “Batman” is emblazoned at the back of the phone, under the ROG branding. It is accompanied by a stippled Batman logo.

Blass states that the ASUS ROG Phone 6 Batman Edition will get Batman-centric special themes and skins. Meanwhile, the specs and features will be the same as the vanilla ROG Phone 6.

Hence, we can expect the Batman Edition to sport a Snapdragon 8+ Gen 1 processor built on the TSMC’s 4nm fabrication process. It will come with up to 12GB LPDDR5 RAM and 256GB UFS 3.1 storage. The smartphone is reported to get an enhanced cooling system that can reduce the CPU temperature by up to 10-degrees Celsius. Furthermore, its metal body will also aid in faster heat dissipation when compared to plastic phones.

As for the display, the device will feature a 6.78-inch Full HD+ AMOLED screen with a refresh rate of 165Hz. It will have a 10-bit panel with 111 percent DCI-P3 coverage, 150 percent sRGB, and a peak brightness of 1200 nits. Furthermore, it will support 720Hz touch sampling.

When it comes to imaging, the ASUS ROG Phone 6 Batman Edition will feature a triple-camera setup. It will include a 50MP Sony IMX766 primary camera, a 13MP ultra-wide-angle camera, as well as a 5MP macro camera. Unfortunately, it won’t feature a telephoto sensor. The ROG Phone 6 sports a 12MP Sony IMX663 sensor for selfies and video calls.

Additionally, the smartphone will support 11 5G bands, Wi-Fi 6e, Bluetooth v5.2, USB 3.1 Type-C port, and a USB 2.0 Type-C port. It will also feature an in-display fingerprint sensor. The ROG Phone 6 will be powered by a 6,000mAh battery along with with 65W HyperCharge fast charging technology.