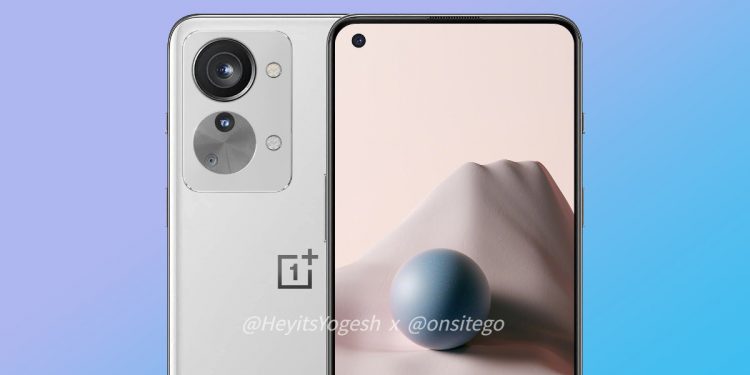 The OnePlus Nord 2T will be the company’s newest addition to the mid-range Nord series, which has been slowly gaining its foothold in global markets. The upcoming smartphone is a slightly beefed-up version of the Nord 2 and comes with a new MediaTek processor and faster charging.

The rest of the features will remain similar to the OnePlus Nord 2. The phone’s specifications have already been leaked several times, and we are now bringing you the first look at the OnePlus Nord 2T’s design, thanks to our collaboration with industry insider Yogesh Brar.

The images show the front and rear design of the OnePlus Nord 2T. It has a bezel-less display with a hole-punch-shaped cutout for the front-facing camera. At the rear, it has a triple-camera setup. Other design elements of the phone include OnePlus’ iconic alert slider. The phone’s fundamental design is similar to the Nord 2, with nearly identical proportions and button positioning, as well as the Alert Slider.

The phone is expected to come in two colour variants—black and blue—which are already common for the Nord lineup.

The phone has a very different looking camera module. There are three sensors on the rear, with a layout that might not appeal to the majority of consumers. We would like to remind readers that the renders are based on PVT devices and that some design features may be tweaked just before the launch.

The OnePlus Nord 2T is believed to sport a 6.43-inch AMOLED display with Full HD+ resolution, a 90Hz refresh rate, and HDR10+. It will be powered by the MediaTek Dimensity 1300 processor. It will have up to 12GB of LPDDR4X RAM and up to 256GB of UFS 3.1 storage. The phone will not have a 3.5mm audio jack but it will feature stereo speakers and Dolby Audio support.

OnePlus is expected to ship the Nord 2T with Android 12-based OxygenOS 12.1 out of the box. Expect the phone to have an in-display fingerprint reader and Hi-Res Audio support. Other features of the phone include a dual-cell 4,500mAh battery that supports 80W SuperVOOC fast charging.