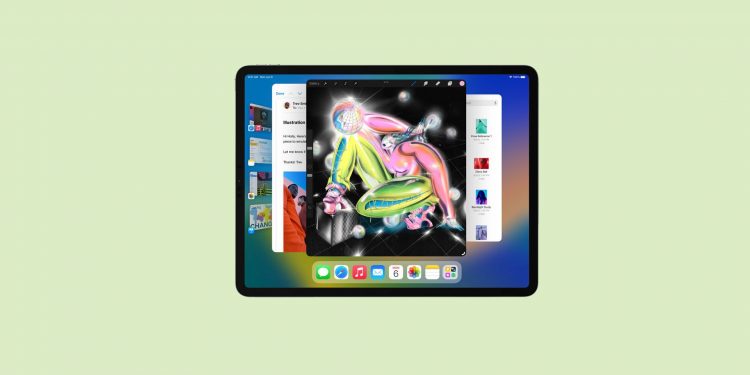 Apple announced the iPadOS 16, which brings a significant upgrade to the iPad, at WWDC 2022. The company’s latest operating system for the iPad promises an improved multitasking experience with Stage Manager. It also introduces major upgrades for the Messages app, Mail, Safari, and iCloud Shared Photo Library.

Craig Federighi, Apple’s senior vice president of Software Engineering spoke about iPadOS 16, saying that it “takes multitasking on iPad to a whole new level, plus new ways to share and collaborate via Messages, Safari, and the new Freeform app, and new pro features like Reference Mode and Display Zoom, users can get even more done on iPad”.

With iPadOS 16, users will be allowed to edit or recall recently sent messages. Moreover, it adds the ability to recover recently deleted messages and mark conversations as unread. The latest update also introduces SharePlay via Messages. This will allow you to watch a movie or TV show while texting with friends via Messages.

Freeform lets you edit and add content to the canvas in real-time. The app will allow you to FaceTime your friends from the Messsages app. It is arriving on iPadOS 16 later this year.

Also Read
Dreaming Of An Instagram App On iPad? It's Not Coming Anytime Soon

Safari gets Shared Tab Groups with iPadOS 16. This feature will allow you to work with your friends on a collection of Safari tabs. Apple is boosting security on Safari with passkeys, which the company claims is “an easier and safer sign-in method designed to replace passwords on the web and in apps”.

iPadOS 16 introduces a new multitasking feature called Stage Manager. This function will automatically organize windows and apps. This will help you create overlapping windows in a single view, which is a first for the iPad. The iPad Pro and iPad Air with the M1 chip get full external display support with this update.

You can check out the entire list of iPadOS 16 features here.