Mahindra XUV400 EV Unveiled, Has All The Ingredients To Dethrone Tata Nexon EV 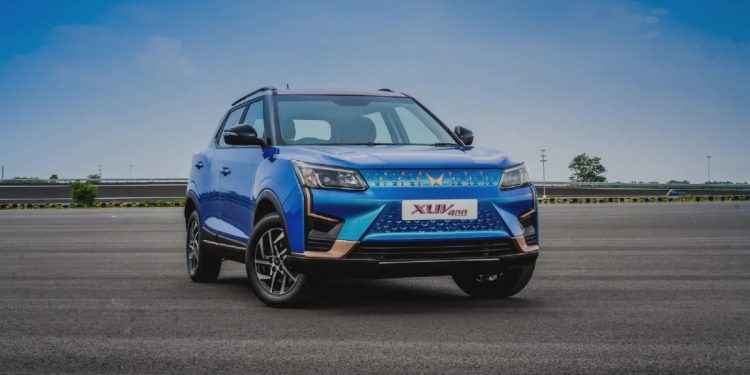 Mahindra unveiled its XUV400 electric SUV on the eve of World EV Day 2022. The XUV400 electric vehicle is based on the already available ICE-powered XUV300. The XUV400 intends to kill two birds with one stone as it will attempt to take on the B-segment electric cars such as the Tata Nexon EV Max as well as the C-segment EVs such as the MG ZS EV and the Hyundai Kona EV. It promises to offer more space, comfort, safety, and driving range than its competitors. Let’s have a look at what it offers below.

The Mahindra XUV400 carries a similar design as the XUV300 but is longer by 200mm, resulting in a larger boot space of 378 litres. The front end has received some tweaks in the form of a blocked-off grill with a satin copper-finished “Twin Peaks” logo and copper “X” patterns. The company has also deleted the front foglamps and has added some copper accents around it. The copper treatment extends to the roof, which gets a glossy copper shade to differentiate it from the petrol/diesel models. At the rear, it gets similar tail lamps but are of the clear-lens type and gets a revised LED DRL layout.

Talking about its interiors, the XUV400 now comes with a sporty all-black cabin as opposed to the biege+black combo of the XUV300. The dashboard gets a glossy black treatment on the steering wheel and copper accents on the aircon vents to enhance its appeal. Furthermore, the vehicle gets a new BMW-inspired drive selector with illuminated indicators.

Some noteworthy features of the electric SUV include six airbags, 60+ connected car features, an electric sunroof, a rearview camera, push start/stop button, a touch-screen infotainment system, and 16-inch diamond-cut alloy wheels, among others.

The Mahindra XUV400 will not be based on Mahindra’s INGLO skateboard EV platform. It gets an XUV300-derived architecture with some adjustments to accommodate the battery pack. Safety is paramount at Mahindra, and the company says that it has used UHSS (Ultra High Strength Steel), AHSS (Advanced High Strength Steel), and HSS (High Strength Steel) for the XUV400. It has added a third load path through the K frame for enhanced frontal crash protection. Additionally, it has used UHSS and reinforcements around the battery pack to protect it in the event of a crash.

The XUV400 draws power from a 39.5kWh battery pack, which is slightly lower than the 40.5kWh battery pack of the Tata Nexon EV Max. However, Mahindra claims that its battery has the highest cell energy density in the segment and claims a driving range of 456km on a single charge (ARAI tested). In comparison, the Tata Nexon EV Max offers 437km, Hyundai Kona EV offers 452km, and MG ZS EV offers 461km. The car reportedly takes about 50 minutes to go from 0-80 percent in 50 minutes when hooked to a 50kW fast charger.

When it comes to the battery design, the XUV400 incorporates two rear vents, as opposed to the single vent design of conventional battery packs. Furthermore, it gets a cooling + heating mechanism to maintain its operating temperature in both cold and hot conditions. The battery pack is IP67 rated for water and dust resistance for enhanced durability. Mahindra says that the battery pack for the XUV400 has been developed in-house in Bengaluru and is manufactured at its plant in Chakan, Pune.

The XUV400 boasts of a front-axle-mounted P5M electric motor, which churns out 110kW power (148 BHP) and 310Nm of torque. It propels the car from 0-60km/h in just 4 seconds and 0-100km/h in 8.3 seconds, which is faster when compared to the Tata Nexon EV, MG ZS EV, and Hyundai Kona. The EV features a single pedal technology and gets three drive modes—Fun, Fast, and Fearless—that alter the steering weight and power response for a personalised driving experience. The car can reach a top speed of 150km/h.

The added weight of the battery pack can hamper the ride quality of a car, especially the ones that are based on ICE-derived platforms. The Mahindra XUV400 uses a revised suspension with Frequency Selective Damping (FSD) technology, which the XUV700 and the Scorpio-N also use, to offer improved comfort over rough surfaces and superior handling characteristics on the highway.

Mahindra also revealed the timeline of the XUV400 launch. The company will organise its fun fest and drive experience events in October-November 2022. Interested buyers will be able to test drive the car in showrooms from December 2022. Price reveal and bookings will happen in early January, and deliveries will start by the end of January 2023. The XUV400 will come in Arctic Blue, Everest White, Galaxy Grey, Napoli Black, and Infinity Blue colour options.