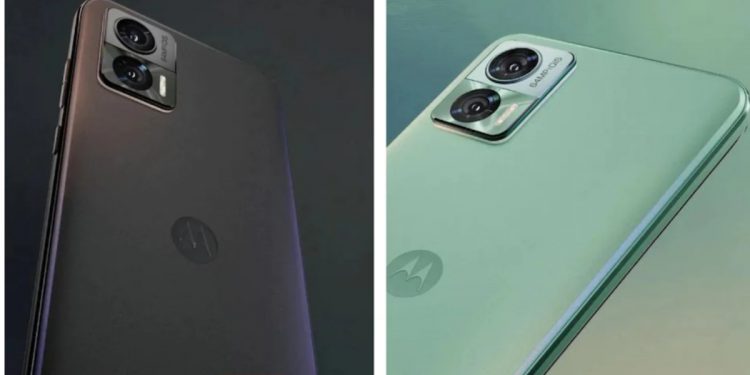 Motorola is reportedly preparing for the launch of the Motorola Edge 30 Neo smartphone. This is the same device that was previously reported to be the Motorola Edge Lite. The smartphone is currently under development and goes by the codename Miami. The handset was spotted on Geekbench at the beginning of this month. The benchmark listing had confirmed the key hardware specifications of the device. Now, in a recent development, the colour options of the Edge 30 Neo have been revealed courtesy of Evan Blass and 91Mobiles.

As seen in the pictures, the Motorola Edge 30 Neo will arrive in Aqua Foam, Black Onyx, Ice Palace, and Very Peri colour options. The device will have a hole-punch cutout on the display, which will house the selfie camera. At the bottom side, the handset will feature a USB Type-C port, a microphone, a speaker grille, and a SIM tray. On the back side, the phone will sport a 64MP dual rear camera setup which will be accompanied by an LED flashlight. On the right hand side, the handset will include volume rockers and a power button.

As far as the specifications are concerned, the device is tipped to come equipped with a Snapdragon 695 SoC. The System on Chip is expected to include up to 8GB of RAM and 256GB of internal storage. The handset might feature a pOLED display that might offer up to 120Hz refresh rate. The device is rumoured to pack a 4020mAh battery which, no doubt, will offer fast charging support.

As for the pricing, the device is expected to retail for EUR 399 (roughly ₹32,800) for the 8GB RAM + 128GB storage option in the European market. As of now, Motorola is yet to announce the launch date of the Motorola Edge 30 Neo. However, as the days pass we shall continue to learn more details regarding the handset.

Are you excited for the Motorola Edge 30 Neo? Do let us know in the comments section below.