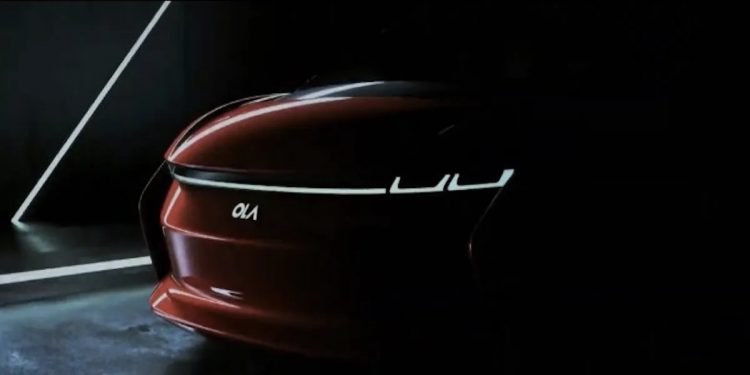 Ola is preparing to make its debut in the electric car segment. At the “Ola Customer Day” event held at Krishnagiri, Tamil Nadu, the company offered a peek at the upcoming electric vehicle. Besides, Ola showcased the new MoveOS 2 and the accompanying features.

Ola CEO Bhavish Aggarwal offered a look at Ola’s first electric car in a short clip. The video showcases the front fascia of the upcoming car. A closer look at the daytime running light (DRL) and the front headlight reveals that the company may be showing off not one, but two models. One car has three segments of headlamps and a DRL across the bonnet. The other car has a DRL that wraps around and merges into the headlamps.

According to some reports, Ola could be launching an electric SUV and an electric sedan. There’s no word on when its first electric car will be launched. Aggarwal promised to share more details about the launch in the next two months. Some speculate that that the brand could reveal the concept on August 15. It is rumoured that Ola’s electric car could launch in 2023.

As per Autocar India’s sources, Ola’s first electric car will likely feature a large battery with a capacity of around 70-80kWh. Additionally, the outlet adds that the car could go into production as early as 2023. Don’t expect the Ola electric car to be budget friendly, considering the large battery pack and the car being marketed as a large sedan. The report says that the Ola electric sedan could be priced around ₹25 lakhs.

You can check out the video below, with Ola’s electric car being teased from the 54:03 mark.