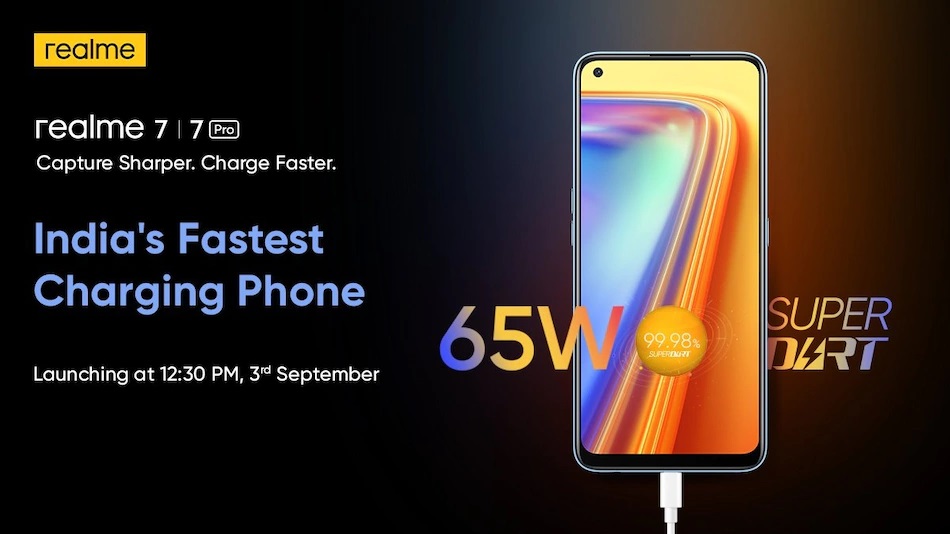 The Realme 7 and the Realme 7 Pro will be launched in September, and the front design of the phones have been officially revealed by the company already. We received an invite for the launch event earlier today, and we’ll be covering its launch.

Realme has announced that it will launch the Realme 7 and the Realme 7 Pro in India on September 3 at 12:30 PM during a digital-only event. You can watch the launch event live on Facebook, Twitter, and YouTube.

The company hasn’t revealed the specifications of the Realme 7 and the Realme 7 Pro, but it has hinted a few features with its tagline ‘Capture Sharper. Charge Faster.’ In a tweet, the company also revealed that the phones will feature 64MP quad-camera setups. At least one of the two phones will feature super-fast 65W Dart Charge feature, and we’re guessing that the Realme 7 Pro will come with the mentioned fast-charging technology. The teaser also shows the device featuring a full-screen display with a punch-hole-shaped cutout in the top left corner.

Apart from these teasers, some specifications of the Realme 7 have been leaked via a tweet from Mukul Sharma (@stufflistings). Going by the information, the Realme 7 will feature a 6.5-inch IPS LCD screen with Full HD+ resolution, a 90Hz refresh rate, and a 120Hz touch sampling rate. The phone will also come with a side-mounted capacitive fingerprint reader. It will reportedly use the MediaTek Helio G95 processor, 6GB/8GB RAM, and 64GB/128GB internal storage.

In terms of imaging, the Realme 7 will sport a 16MP selfie camera (Sony IMX682) and a 64MP quad-camera setup at the rear. The rear-facing camera setup includes a 64MP primary camera, an 8MP ultrawide camera, a 2MP monochrome camera, and a 2MP macro camera. The phone will reportedly be able to capture 4K 30fps videos with the UIS Max video stabilization feature. The Realme 7 is expected to feature 30W fast charging.

Exclusive: Here are the specifications of the Realme 7.#Realme #Realme7 #Realme7Pro pic.twitter.com/gH5Bt3LMid

The Realme 7 Pro, on the other hand, will most likely feature 65W Super Dart Charge. It could also be equipped with a 6.4-inch Super AMOLED screen with a 90Hz refresh rate, a 120Hz touch sampling rate, and a corner punch-hole cutout for the selfie camera. In terms of internal hardware, the phone will reportedly come equipped with the Snapdragon 720G processor, 6GB/8GB RAM, and 128GB internal storage. The phone will come packed with a 4,500mAh battery and a dual stereo loudspeaker setup.

Both smartphones are expected to come with Android 10 and Realme UI, 4G LTE, dual-SIM card slot, GPS, Wi-Fi b/g/n/ac, Wi-Fi Direct, Bluetooth 5.0, USB Type-C port, and a 3.5mm headphone jack.  These smartphones could be priced anywhere between ₹15,000 to ₹25,000, depending on the variant. However, we’ll only be able to tell for sure when the smartphones get launched on September 3, 2020.

Apple iPhones With USB Type-C Charging Port? Yes, It Might Soon Become A Reality With This Rule