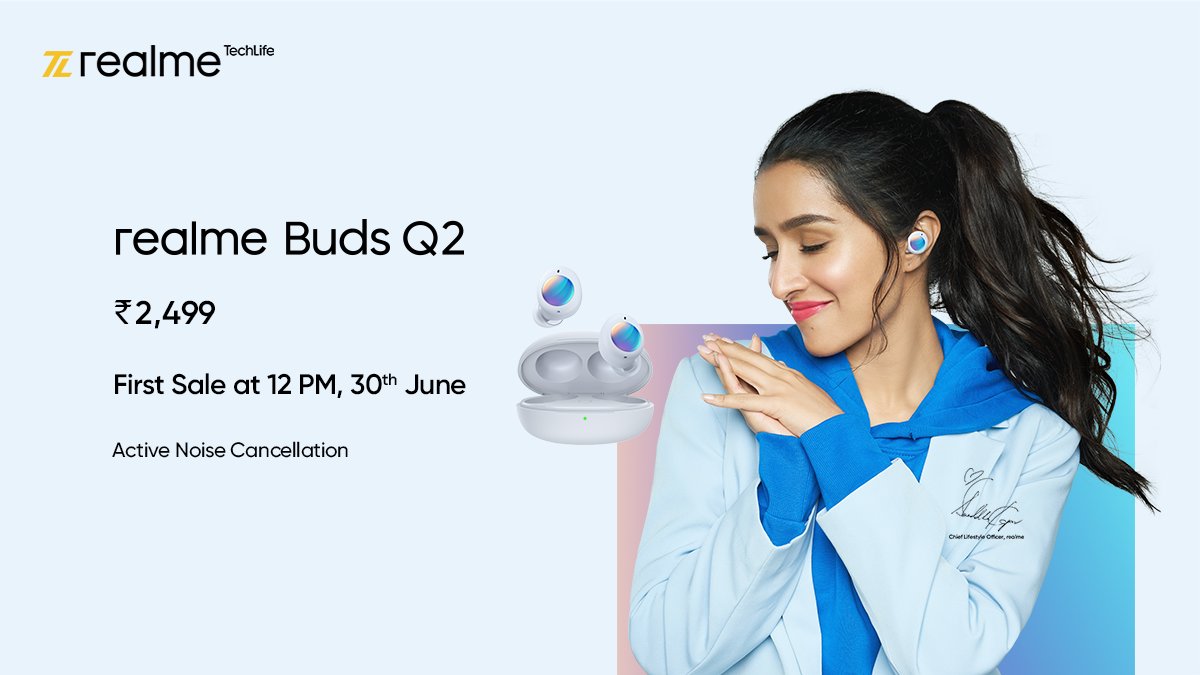 The Realme Buds Q2 have been priced in India at Rs 2,499. The TWS earphones are currently up for pre-orders and they will go on sale in India from 30th June from the brand’s official online store, Amazon, and authorized retail stores. 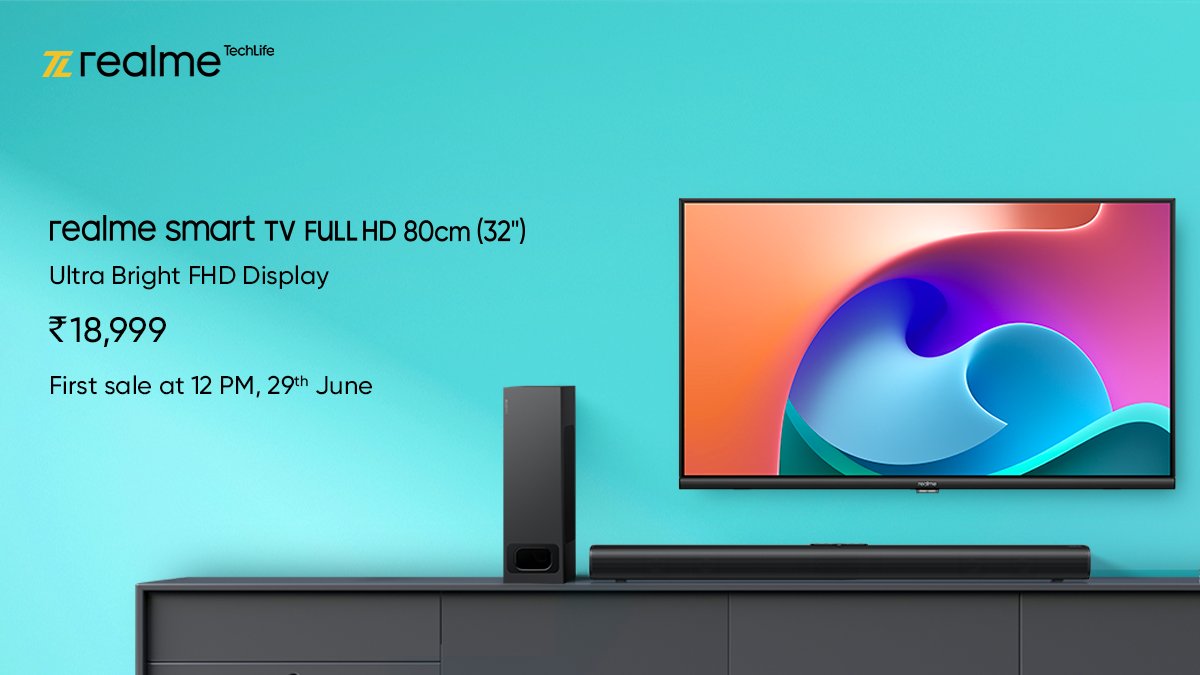 The Realme Smart TV Full HD 32-inch has been priced at Rs 18,999. However, it will be available for Rs 17,999 during its first sale. The TV will go on sale in India on 29th June at 12:00 PM from Flipkart, Realme’s official online store, and authorized offline stores.

The Realme Buds Q2 feature 10mm drivers, which, according to the brand, have been optimized for offering better bass. The main highlight of the Realme Buds Q2, however, has to be its Active Noise Cancellation (ANC) feature. The Realme Buds Q2 are probably the most affordable ANC-equipped earbuds in India at the moment.

As the name suggests, ANC cancels the surrounding noise, which, in turn, offers a better audio listening experience and reduces distractions for focusing on what you are doing. To enable the ANC feature, each earbud has two microphones, which also offer Noise Cancellation for calls so that you can focus on the voice of the other person. 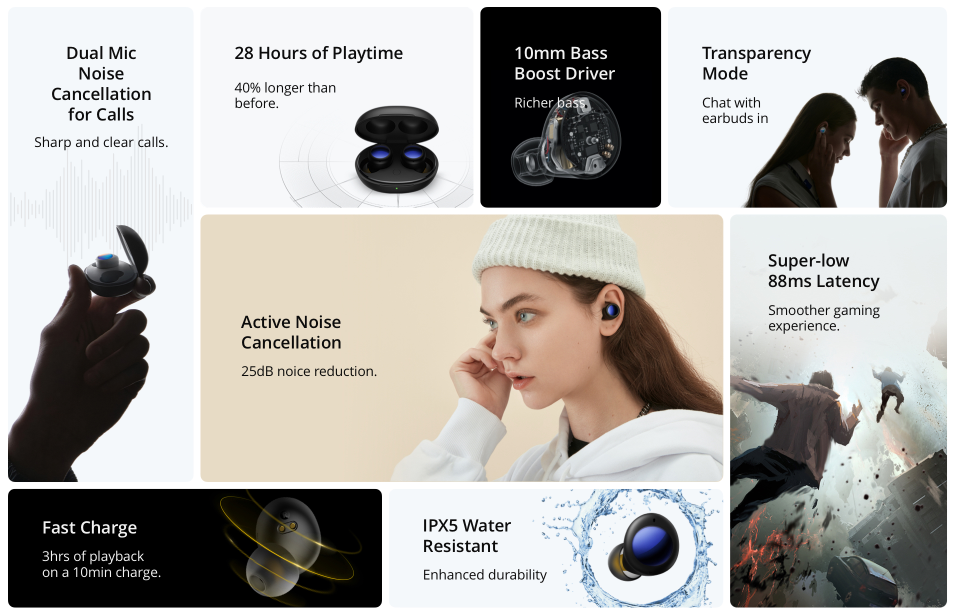 The Realme Buds Q2 offer 5 hours of battery backup on a single charge with ANC switched on and 7 hours with ANC switched off. The charging case can additionally offer 28 hours of playback time with ANC turned off and 20 hours of battery backup with ANC turned on. Fortunately, the charging case of the Realme Buds Q2 has a USB Type-C port for charging. There is also a fast-charging solution onboard, which can offer 3 hours of playback on a 10 minutes charge.

Speaking of connectivity, the Realme Buds Q2 have Bluetooth v5.2 with support for AAC and SBC. According to the brand, the earbuds have a latency of just 88ms. The Realme Buds Q2 also carry IPX5 water-resistant rating.

The Realme Smart TV Full HD 32-inch, as its name suggests, has a 32-inch display panel with full-HD resolution. Most of the 32-inch TVs in India come with HD resolution. So, it is quite a big deal that Realme is offering full-HD resolution with a 32-inch TV, that too on a budget. Anyway, the screen is an LCD unit with an LED backlight. Considering that Realme hasn’t mentioned anything about IPS technology on its website, we are assuming the display is a VA panel. According to the brand, the screen covers 85% of the NTSC color gamut. 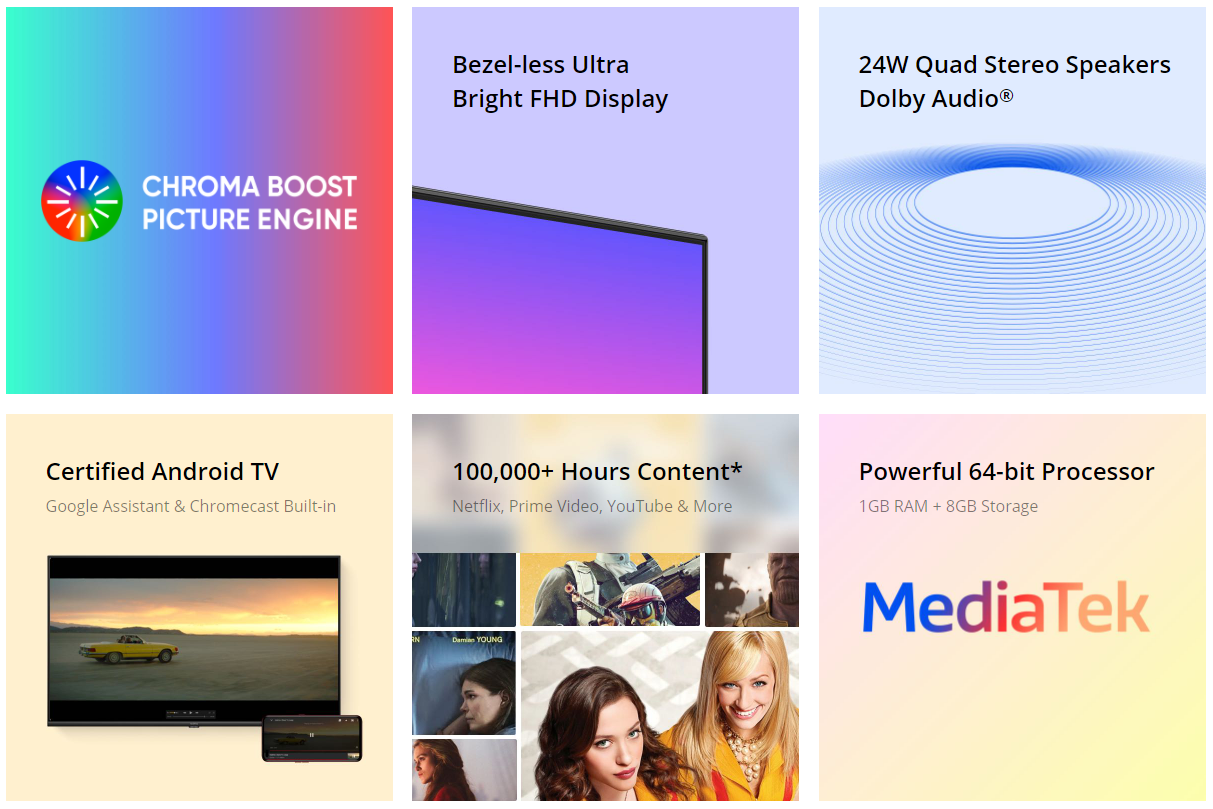 As for the audio, the Realme Smart TV Full HD 32-inch has four speakers (two woofers and two tweeters on each side) in a stereo setup with a total output power of 24W. The TV also supports Dolby Audio. The television is powered by a MediaTek chipset that has four Cortex-A53 CPU cores and Mali-470 MP3 GPU. There is 1GB of RAM and 8GB of storage onboard. On the software side of things, the TV ships with Android TV 9.0 with Play Store, Chromecast Built-in, and Google Assistant.

Coming to the connectivity options, the Realme Smart TV Full HD 32-inch has three HDMI ports, two USB ports, one LAN port, one SPDIF port, 1 AV-in, one tuner port, 2.4GHz Wi-Fi, and Bluetooth v5.0. The remote that comes with the TV has both, Bluetooth, as well as infrared. It features dedicated buttons for power, volume control, mute, home, back, options, Netflix, Prime Video, YouTube, and also a D-pad for navigating the UI.