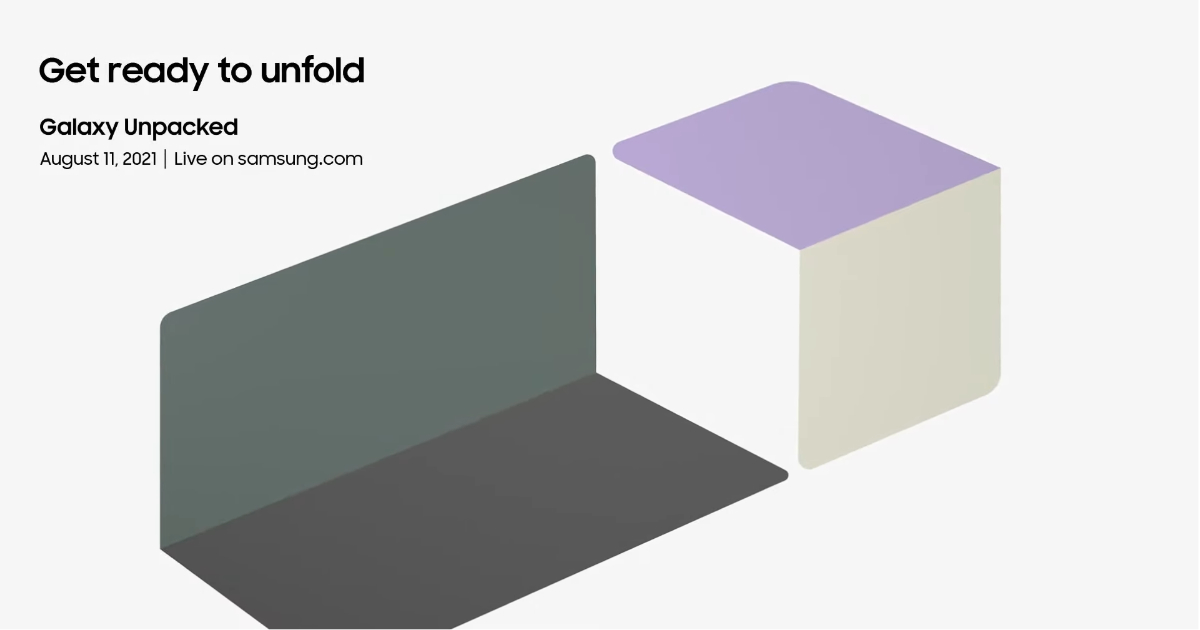 Samsung has announced that it will be holding the Galaxy Unpacked event on August 11, 2021. The event will kick off at 10:00 AM ET (07:30 PM IST) and it will be streamed live on YouTube, Samsung’s official website, and Samsung Newsroom.

What To Expect From Galaxy Unpacked August 2021 Event?

According to various leaks, the Samsung Galaxy Z Fold 3 will feature a 6.23-inch Super AMOLED Infinity-O cover display with Full HD+ resolution, a 120Hz refresh rate, HDR10+, and Gorilla Glass Victus. When the foldable smartphone is opened, it reveals a 7.5-inch Super AMOLED foldable display with QHD+ resolution a 120Hz refresh rate, HDR10+, and UTG 2.0 (Ultra Thin Glass 2.0) protection. The phone will also be compatible with the S Pen and the S Pen Pro. There will be a side-mounted fingerprint scanner.

The phone is expected to have a 12MP primary camera with OIS, a 12MP ultrawide lens with autofocus, and a 12MP telephoto camera with 3x optical zoom and OIS. For selfies, there is said to be a 16MP under-display camera below the foldable screen and a 10MP front-facing camera on the outer display. Other features could include 5G, GPS, Wi-Fi 6E, Bluetooth 5.0, NFC, UWB (Ultra Wideband), and a USB Type-C port.

The Samsung Galaxy Z Fold 3 is expected to feature the Qualcomm Snapdragon 888 chipset, up to 16GB of RAM, and 256GB/512GB internal storage. Expect the Galaxy Z Fold 3 to ship with the Android 11 OS out of the box with a new version of One UI that’s optimised for the bigger, foldable display. The phone is said to be powered by a 4,400mAh battery with support for 25W charging, Qi wireless charging, and reverse wireless charging. It is also said to feature stereo speakers and an IPX8 rating for water resistance.

The Samsung Galaxy Z Flip 3 is expected to have a 6.7-inch Super AMOLED Infinity-O foldable display with Full HD+ resolution, a 120Hz refresh rate, HDR10+, and UTG 2.0 protection. There is also said to be a smaller, 1.93-inch secondary screen on the outer shell to check notifications, time, battery level, and double up as a camera viewfinder. Other leaks suggest that the Galaxy Z Flip 3 will have a 12MP+12MP dual-camera setup at the rear and a 10MP selfie camera on the inner display.

The phone is expected to be powered by the Qualcomm Snapdragon 888 processor, 8GB RAM, and 128GB/256GB internal storage. On the software side of things, it will ship with the Android 11 OS. The phone is said to pack a 3,300mAh battery with a 15W charging speed and Qi wireless charging. Other features could include GPS, 5G, 4G LTE, Wi-Fi 6, Bluetooth 5.0, and a USB Type-C port. It could also feature an IPX8 rating for water resistance.

The Galaxy Buds 2 are expected to feature a Bluetooth 5.0 chip with AAC and SSC codecs. These truly wireless earbuds could have a dual-driver setup similar to the Galaxy Buds+. They could also have three microphones on each earbud for improved call quality. They feature ANC (Active Noise Cancellation), automatic wear detection, sweat resistance, USB Type-C port, and Qi wireless charging. The Galaxy Buds 2 will have a rounded square case and they could be priced at $150 (around ₹12,000).

The Galaxy Watch 4 will come in 40mm and 42mm screen sizes and the Galaxy Watch 4 Classic will come in 42 and 46mm screen sizes. According to SamMobile’s exclusive report, they will come equipped with Samsung’s 5nm Exynos W920 processor, 1.5GB RAM, and 16GB internal storage. They will feature an accelerometer, a barometer, ECG, a gyro sensor, GPS, a heart-rate monitor, and an SpO2 sensor. They can track your heart rate, oxygen saturation levels, workouts, and sleep.

Nokia 9 PureView Won’t Get Android 11 Update; Users To Get 50% Discount on XR20 Upgrade as Consolation