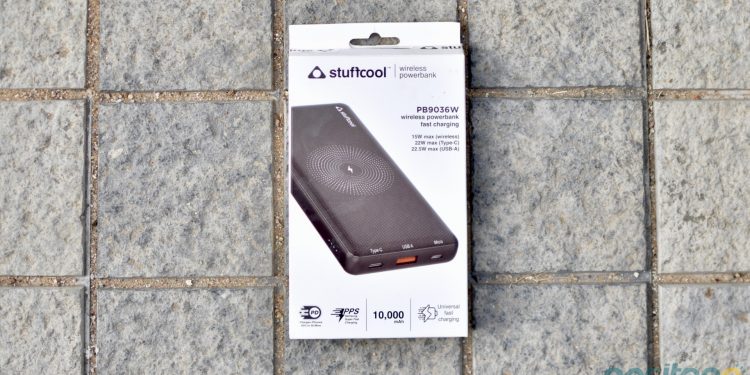 Stuffcool is an extremely popular brand in the Indian smartphone accessories space. It sells a variety of chargers, power banks, cables, car mounts, cases, sleeves, and even watch bands, and we’ve reviewed some of its products in the past and came away impressed. We recently had a chance to test its new wireless charging power bank, the PB9036W, which was launched in October 2022. It is a 10,000mAh portable power bank with a twist—wireless charging—further enhancing its flexibility.

After using the power bank for over a month, I am finally ready with my Stuffcool Wireless Powerbank review. I’ve used it with various devices, including the iPhone 14 Pro, Samsung Galaxy S21 Ultra, Samsung Galaxy Z Fold 4, Samsung Galaxy Buds 2 Pro, and the Apple Watch Series 7.

Like most power banks, the Stuffcool Wireless Powerbank is made using plastic materials, which makes it lightweight and comfortable to carry around. It also helps protect other devices attached to it, as metal can scratch smartphone screens. It has a relatively simple design, featuring three ports—microUSB, USB Type-C, and USB Type-A—on the bottom and the power button on the bottom right. The front and rear of the power bank have a textured finish, saving phones from slipping off while getting charged wirelessly.

Sadly, the Stuffcool Wireless Powerbank doesn’t come bundled with any accessories, so you won’t get any charging cable or adapter.

The wireless power bank worked effortlessly while charging a myriad of devices. I used Plugable’s 240W Power Meter to check how much power is actually being supplied by the power bank. The iPhone 14 Pro was getting up to 20W of power, while the Galaxy S21 Ultra and the Galaxy Z Fold 4 were getting close to 21W of power. The Apple Watch Series 8 and the AirPods Pro were getting anywhere between 1W-1.5W of power via the USB Type-C port. The MacBook Pro 14 received 22W of power via the USB PD standard.

The Galaxy S22+ was getting up to 18W of power through the USB Type-A port via the Adaptive Fast Charge (based on Quick Charge 2.0) standard. It was a similar power output for most phones compatible with the Quick Charge standard.

The Stuffcool Wireless Powerbank is one of the best options in India if you want a power bank with fast wired and wireless charging. It can charge three devices simultaneously, with one of them getting fast-charged.