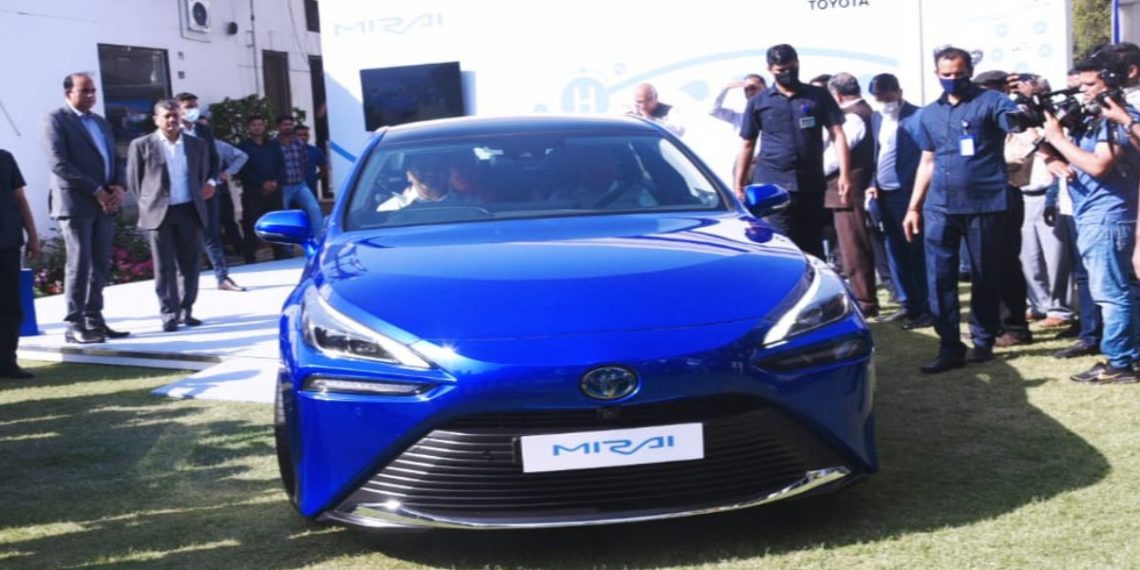 Toyota Motors has taken a bold step and introduced its Mirai hydrogen fuel cell sedan in India. The world’s largest automaker has brought the vehicle to India as a part of a pilot project in association with ICAT (International Centre for Automotive Technology).

Nitin Gadkari, Union Transport minister of India, kick-started the pilot project and also expressed an interest to own the vehicle. He also announced that IOC (Indian Oil Corporation) will be supplying hydrogen (H) to power the Toyota Mirai car.

The Toyota Mirai runs on hydrogen (H) and is a pollution-free car as its only by-product is water. The hydrogen is stored in the tanks of the car, similar to how CNG is stored. The hydrogen then reacts with oxygen and the electricity produced is stored in the battery, which in turn drives the motor. The car develops about 182PS of power and 300NM of torque, which propels it from 0-100 km/hr in under 9 seconds.

The Mirai’s battery is 30 times smaller than the battery packs found on pure EVs, thus keeping the weight of the car in check. The Toyota Mirai weighs just about 1900 kg, whereas most electric cars weigh over 2000 kg. Another advantage of the FCEV is that Toyota says you can fill up the highly compressed hydrogen tanks at a filling station in about the same time as a petrol/diesel car. The car takes about 4 kg to 5 kg of hydrogen and can offer up to 650 kilometres of range. That’s almost a similar range offered by a petrol/diesel car. Such a range from just 4-5 kg of hydrogen may seem unbelievable, but it’s true. In comparison, a CNG car on a full tank of 8 kg can run only about 230-250 km.

Positives And Negatives Of A Hydrogen-Powered Car In India

While the long-range that a hydrogen FCEV offers may excite you, the fuel cost comes as a major negative. Green hydrogen (H) doesn’t come cheap and is estimated to cost between ₹400-500 per kilogram. Thus, a full tank of hydrogen for the Toyota Mirai would cost you around ₹2,500 bucks, which is effectively running cost of around ₹4 per km. That would be a costly affair when compared to CNG vehicles that cost between ₹2-3 per km to run. Pure EVs run at an even lower ₹1-1.5 per km. Having said that, it would still be a lot cheaper alternative to petrol/diesel cars, which currently run at ₹7-10 per km within city limits. It provides a higher range than a CNG equipped vehicle. Also, as opposed to an EV, you won’t be required to wait for long hours at a charging station to get your car charged.

Hydrogen can be extracted from natural gas and can also be produced by electrolysis. In 2021, Reliance Industries announced that it is working towards bringing the green hydrogen price down to ₹160 by 2029-30. While this may reduce the running costs of the FCEV in the future, infrastructure and transportation of the fuel are some major challenges. For instance, after so many years of implementation of CNG in India, the infrastructure is still lacking. Hydrogen leaks very easily and is highly flammable, and hence would require advanced transportation solutions.

The government of India is bullish on this technology as it provides opportunities to decarbonise a variety of sectors. Union Power Minister, R. K. Singh, has even announced that NTPC will run hydrogen-powered buses from Delhi to Jaipur. It would be interesting to see if the people of India would adopt such an alternative fuel or simply go for electric cars, which comes with its own set of limitations and challenges, in the future.