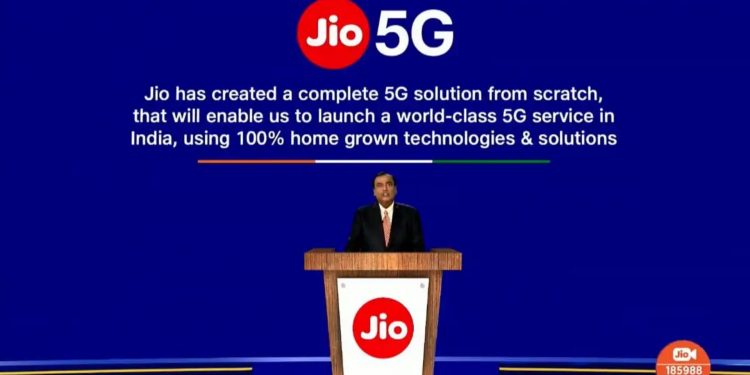 With 5G rollout around the corner, telecom operators are gearing up to roll out 5G services in India from October. Around 22 cities are expected to experience the next generation network in the first phase of the rollout from Diwali.

However, the 5G smartphone penetration remains quite low, which is a concern for the telecom operators who are investing millions of dollars in ramping up the infrastructure to support 5G networks. Reliance Jio is going the extra mile with a standalone 5G network while Bharti Airtel is testing the waters with a non-standalone network first.

To get returns out of its investment, the telecom operators like Jio and Airtel need more mass market adoption of 5G smartphones, and who better to nudge the public towards it than the mighty Reliance Jio? The company is expected to launch its first 5G smartphone soon as the network covers a wider area in the country.

As per a report by Counterpoint Research, Reliance Jio is expected to launch an affordable 5G smartphone in collaboration with Google in the ₹8000 – ₹12000 price range.

The report by Counterpoint Research states that the Reliance Jio Phone 5G could be priced between ₹8000 and ₹12,000. The pricing strategy would be similar to what the company used for the launch of the Reliance Jio Phone 4G, offered under ₹6,000 to push for higher adoption of its 4G network among 2G feature phone users.

“The two-prong strategy will be key to Jio’s growth and extend its leadership in the 5G era as well. Further, at some point in 2024, Jio will also be compelled to launch an affordable 5G mmWave+sub-6GHz smartphone as the cost deltas between the two have narrowed significantly from an overall BoM (Bill of Materials) fitting perspective,” the report says.

Reliance Jio chairman Mukesh Ambani, at the company’s annual general meeting in August, revealed that Jio will launch ultra-affordable 5G smartphones in partnership with Google. However, there were no specifics revealed about the pricing of the phone.

Another report from ET cites analysts and industry experts claiming that Reliance Jio’s 5G recharge plans will be priced around 20 percent higher than 4G packs. The company spent the most during the year’s spectrum auctions, spending a whopping ₹88,000 crore acquiring spectrum across key 700 MHz, 3300 MHz, and 26 GHz bands for pan India 5G coverage.