What Is USB Type-C? Here’s How It Will Replace All Your Cables 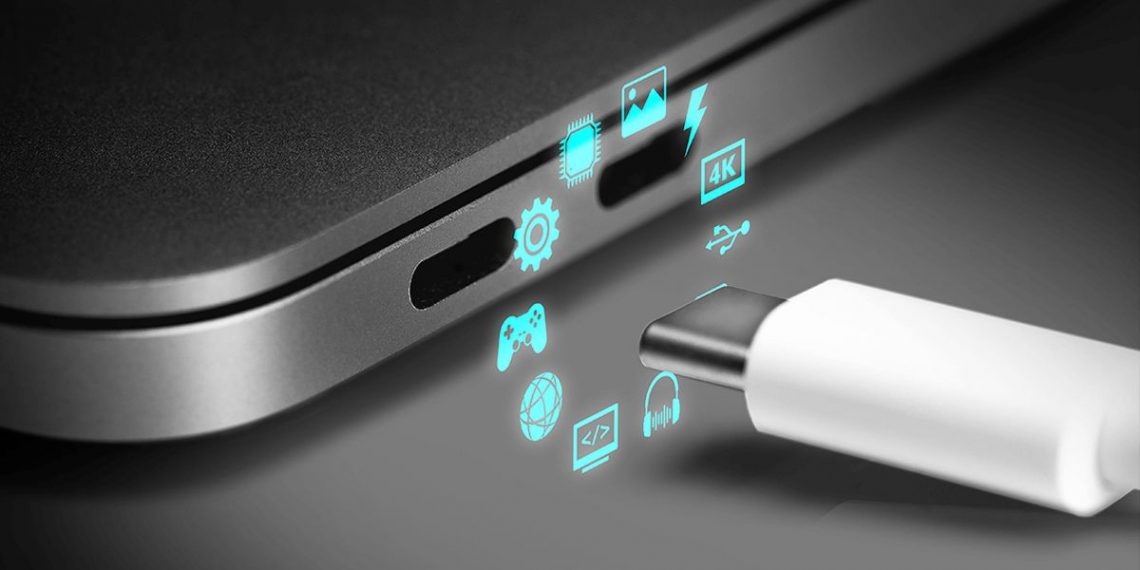 USB, or the Universal Serial Bus interface, was introduced more than 25 years ago—a time when Windows 95 was considered a quantum leap in terms of operating systems. That was also a good three years before Windows 98 would go on to popularise the concept of plug-and-play connectivity. Many contenders, such as IEEE’s FireWire and Apple’s various proprietary implementations, have come and gone over the years.

The USB interface, however, continues to be the de facto standard for interconnectivity across computers, laptops, tablets, smartphones, and associated peripherals to this day. Needless to say, USB Type-C (or USB-C) is an important building block in the world of computing. Here’s everything you need to know about USB-C and why it is the future of wired computing interfaces.

What Is The USB Standard?

The USB standard is a set of regularly updated rules and specifications enforced by the USB Implementer’s Forum (USB-IF) to facilitate interoperability between computing platforms and associated peripheral devices made by different manufacturers.

The logic behind the USB standard is quite similar to the Wi-Fi and Bluetooth protocols. That is, to prevent manufacturers across different computing platforms from fragmenting the market with proprietary peripheral interfaces. The USB-IF strives to maintain a cross-platform communication interface for external hard drives, keyboards, and other peripherals. And it works whether you own an Apple laptop or a Linux-based desktop computer.

Establishing specifications to facilitate interoperability at an operating system (OS), driver, and software level is an important part of ensuring universal peripheral compatibility. The USB standard’s clearly defined software protocols make it easy to integrate the USB interface seamlessly. This is especially true since it allows the hardware and software vendors to be on the same page.

However, it is equally important to ensure the same degree of compliance and consistency in the actual hardware design of the USB interface. In other words, the USB connector on a USB flash drive must be manufactured in a way that it works with corresponding USB ports on any conceivable device. The USB-IF ensures that by specifying everything ranging from the dimensions of the connectors and ports to the number of pinouts and the thickness of the individual conductors attached to them.

These hardware specifications define the different iterations of the USB ports and connectors. This allows USB Type-B cable manufacturers to go about their business without worrying about compatibility with corresponding ports on HP or Epson printers. Over the years, USB interconnects have been available in Type-A and B varieties in regular, mini, and micro sizes. But the USB standard has been gradually transitioning to the USB Type-C interconnect during the last decade.

What Is USB-C? What Makes It Great?

The USB-C interconnect is the latest in the line of physical USB connectors (and complimentary ports) designed to work with the Universal Serial Bus interface. While the USB-A and USB-B connectors show their legacy desktop computing roots in their oversized dimensions, the USB-C connector is designed to play well with slim and portable devices, such as modern smartphones, tablets, and lightweight laptops.

The USB-C ports and plugs are, in fact, a smidge thicker than their micro USB (also known as Micro-B) counterparts. The tiny compromise in thickness allows USB-C connectors to work in any orientation. Much like Apple’s Lightning and MagSafe interfaces. However, better ergonomics isn’t its only improvement. The Type-C plugs and ports are significantly more durable, as evidenced by Linus Tech Tips’ painstakingly practical investigation.

The hardware aspect of USB—that is, the ports and connectors—comes in many forms ranging from the sizeable USB Type-A and B connectors to the more compact micro and mini variants. However, everything from smartphones to desktop computers is gradually embracing the USB -C connectors. This transformation is driven by a number of compelling reasons.

Unlike the micro and mini-USB interconnects, USB-C goes well beyond simply miniaturising the hardware interface. It improves critical parameters spanning durability, power output, ergonomics, and performance. And it does all this while solving pressing compatibility concerns with its support for virtually all computing platforms and associated peripherals.

USB-C and USB 3.1 are two different aspects of the same hardware interface. USB-C represents the physical connectors and ports, whereas USB 3.1 refers to the specifications dictating everything from data transfer rate to electrical aspects such as pinouts and voltage/power. It’s easy to conflate these two terms because the USB 3.1 specification was developed alongside USB-C. However, USB 3.1 isn’t exclusive to USB-C connectors.

As the USB 3.0 specification, USB 3.1 and even the latest 3.2 revision are also compatible with the larger rectangular USB-A connectors. If you thought that was confusing, the USB 3.x naming scheme is even more bizarre. The USB 3.0 standard improved data transfer speeds from 480Mbps maximum of its older USB 2.0 counterpart to a significantly faster 5Gbps. However, the same 5Gbps USB 3.0 specification was later renamed as USB 3.1 Gen 1, while introducing the new USB 3.1 Gen 2 revision increased data transfer speeds to 10Gbps.

You honestly couldn’t pay someone to make things any more confusing.

Fortunately, you can refer to the table below to navigate your way around this mess. USB 3.2, essentially, introduces the concept of lanes. That means, USB 3.2 Gen 1×2 comprises two 5Gbps lanes delivering a total throughput of 10Gbps. Similarly, USB 3.2 Gen 2×1 offers the same total data transfer speed of 10Gbps through a single lane. That also makes USB 3.2 Gen2x2 the fastest of the lot with two lanes delivering 10Gbps each for a total throughput of 20Gbps.

In other words, the single-lane USB 3.2 protocols are new names given to existing USB 3.1 protocols. Although the USB-IF might not be good at coming up with catchy names for its offerings, it is at least self-aware of this shortcoming. That’s why it encourages device manufacturers to use the SuperSpeed USB designations, with the intention of preventing mass confusion among consumers. This naming scheme might have too many words, but that at least makes it easier to know the data transfer speeds at a glance.

Why Is the Industry Moving to USB-C?

There have been plenty of great technologies in the past, but it’s rare to see everyone agreeing to a single standard. It isn’t uncommon for at least a couple of competing standards to exist in the consumer technology space, and yet everything from smartphones and laptops to virtually all peripheral devices are gradually embracing the USB-C interface.

There are a few compelling reasons why that’s the case.

You can’t have standardisation without mass compliance. That isn’t a problem for the USB standard because the USB-IF was founded by the likes of Microsoft, Intel, and IBM, with the 1000-odd members including the likes of Apple, Google, HP, and virtually every major hardware manufacturer and software platform of note.

The USB-C interface is the ticket for these brands to reliably incorporate future technologies into existing hardware while maintaining interoperability between myriad computing platforms and associated peripherals.

Electrical waste comprises a whopping 40 million tonnes of waste—of which, only 15 percent gets recycled. A large chunk of this waste that goes into landfills can be attributed to the various cables bundled with electronics and computing devices. The existence of several types of data and charging cables for the same types of devices across manufacturers only makes this problem worse.

These environmental concerns have nudged the consumer technology industry to embrace a universal connector standard. A single type of cable shared between several device types significantly minimises the number of cables one needs to hoard. The entire technology industry has zeroed in on USB-C for this role.

What’s more, even USB-IF members that refuse to comply, have been forced by legislators to support Type-C cables.

Capability to Deliver Both Power and Data

The USB protocol might primarily exist to enable data communication between host devices and attached peripherals, but supplying power is also one of its intended features. Older USB connectors, however, cannot be used to charge devices or run power-hungry equipment due to their measly 5-watt limitation. That’s why 3.5-inch external USB hard drives require a separate wall charger.

USB-C, however, changes the paradigm by incorporating the new USB PD (or USB Power Delivery) protocol.

This allows USB-C compatible chargers to deliver up to 100 watts of power to connected devices, which is enough to run everything from computer monitors to thin-and-light laptops. In fact, the latest revision to the USB-C standard bumped up the maximum power to 240 watts. It’s hard to find upgraded cables and chargers supporting the Extended Power Range (EPR) feature at the moment, but it won’t be long before even power-hungry gaming laptops will switch entirely to USB PD.

It’s easy to forget that most devices require separate cables for carrying signals and power. The USB PD feature available with the USB-C interface reduces this clutter. This versatility stems from its significantly large 24-pin connector. To put this into perspective, the micro USB interface has only five pins, which limits the amount of power and signals carried through it. This allows USB-C to carry ample power and different types of data signals simultaneously.

Simultaneously is the keyword here. Because USB-C devices have plenty of spare pins to allow simultaneous streaming of audio as well as video data streams, in addition to high-speed throughput of other binary data streams.

The interface also introduces the concept of dual lanes. This allows data, audio, and video streams to be divided into independent uplink and downlink channels. This not only speeds up regular data transfers but is also a godsend for applications such as teleconferencing that rely on duplexing video as well as audio data. This data transfer configuration also greatly benefits demanding applications such as external GPUs that rely on simultaneous streaming of data in both directions.

The high pin count of USB-C also allows it to consolidate audio, video, power, and data signals into a single cable—something that would otherwise require multiple cables and corresponding ports on devices. This versatility allows portable devices to reduce the number of I/O ports and consequently makes it easier for manufacturers to make slimmer and lighter laptops and other portable computing platforms.

What’s Next For The USB Standard?

The USB 3.0 protocol was introduced back in 2008. It goes without saying that a more modern successor has long been overdue. Thankfully, the USB-IF ratified the USB4 protocol in 2019. The new protocol merges the USB standard with its faster Thunderbolt counterpart. If that caught you by surprise, that’s because only a select few high-end devices supporting USB4 were allowed into the market in 2021.

The new standard hasn’t achieved widespread adoption three years since release, despite being completely backward compatible with USB 3.x as well as the older USB 2.x devices. However, USB4 compatibility still requires USB-C adapters, because the industry as a whole has chosen to drop all legacy USB connectors in favour of the USB-C interface. Requiring USB-C adapters is a small price to pay for USB4, but that still doesn’t change the fact that USB-C ports and connectors are complicated and expensive to integrate for hardware manufacturers.

Meanwhile, simply matching Thunderbolt’s data transfer speed is hardly an incentive for manufacturers to push USB4 technology into their devices. The USB-IF must push the envelope of data transfer speeds beyond the current 40Gbps maximum if it hopes for the standard to be widely adopted. Until then, the USB-C connector will coexist alongside USB-A and B interconnects.