Amazfit Band 7 Price In India Revealed Ahead Of Launch: Specifications 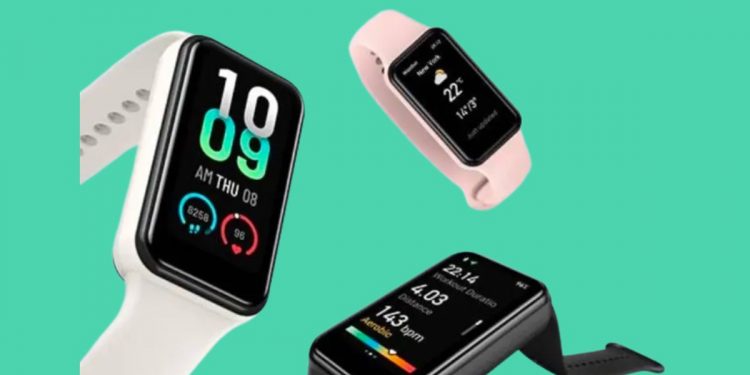 After launching the Amazfit GTR 4 smartwatch in India last month, the brand is now gearing up for the launch of its Amazfit Band 7 in the country. The Amazfit Band 7 will be unveiled in India on November 8, 2022. Ahead of the launch, the price, specifications, and features of the upcoming Amazfit Band 7 smart band have been listed on Amazon India. let’s take a look.

The Amazfit Band 7 will launch in Classic Black and Elegant Beige colour schemes. Though there’s a third pink variant shown in the picture, a report suggests that the same won’t be available at launch. That being said, users will be able to customize the Amazfit Band 7 with four strap colours – Pink, Orange, Blue, and Green.

Moving on to the display, the Amazfit Band 7 will feature a 1.47-inch AMOLED display with a 368 x 198 pixel resolution. The display will be covered with a tempered glass and have an anti-fingerprint coating. Furthermore, the Amazfit Band 7 will feature Always-On Display support and have more than 50 watch faces and 8 customizable watch faces. Users will also be able to upload their photos and create their own watch faces.

The Amazfit Band 7 will come with support for heart-rate monitoring, blood oxygen level measurement, sleep tracking, stress measurement, and menstrual cycle tracking. Plus, the band will have 120 sport modes, smart recognition for walking, running, rowing, and elliptical. As for the battery, the Amazfit Band 7 will pack in a 232mAh battery, which is said to last for 18 days in a typical usage scenario and 12 days in heavy usage scenario.

What are your thoughts on the Amazfit Band 7? Let us know in the comments section below.