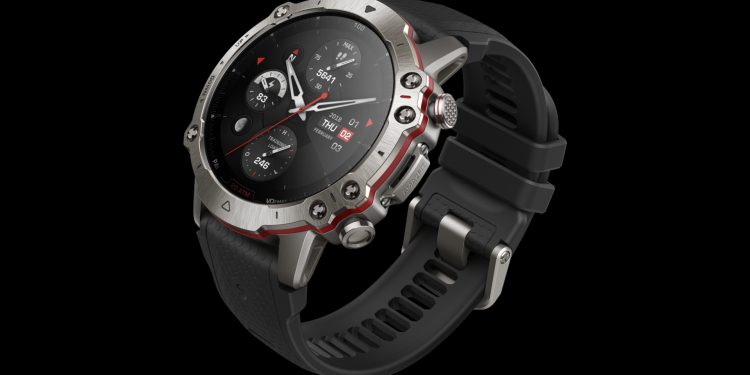 Amazfit has launched a premium rugged smartwatch with a titanium body, always-on display, real-time navigation and more. Called the Amazfit Falcon, the rugged smartwatch features an aircraft-grade TC4 titanium unibody design and looks like a competitor to the Apple Watch Ultra, albeit a far more affordable one.

Amazfit says the Falcon “represents the ultimate balance of toughness and class.” The smartwatch has a corrosion-resistant finish, four control keys made out of titanium, and a sapphire glass display. The Falcon has passed 15 military-grade tests and has a 20 ATM water resistance, a first for Amazfit wearables.

The smartwatch features a 1.28-inch AMOLED display with 416 x 416 pixel resolution with a 326 ppi density and up to 1000 nits brightness. The display, made out of sapphire glass, has a Mohs hardness rating of 9/10, just one grade below a diamond on the hardness scale.

The Amazfit Falcon is built for outdoor use. It has a six satellite positioning system and dual-band GPS (L1 and L5) to accurately track your routes with consistent signal strength, even in dense areas. The watch tracks your route in real-time and suggests the shortest straight line back to the starting point of your journey.

The watch runs on a proprietary ZepOS platform and has an AI-powered Zep Coach that can connect to workout devices and create training templates. The watch can also sync data with third-party fitness apps like Google Fit, Strava, Apple Health, Relive, and Adidas Running app.

The Amazfit Falcon features a 500 mAh battery which the company claims delivers up to two weeks of usage and takes two hours to charge with a 5-pin charger bundled with the watch. The smartwatch weighs 64 grams and has 22mm wide straps made out of liquid silicone. It has support for WIFI 2.4 GHz and Bluetooth 5.0 BLE.