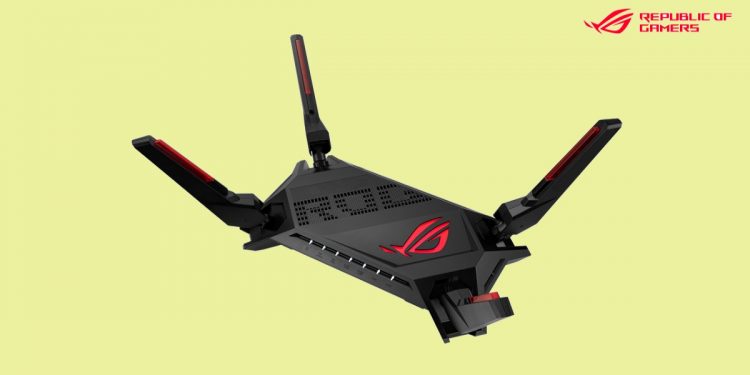 Asus has released its ROG Rapture GT-AX6000 gaming router in the Indian market. It is a high-end performance-oriented gaming router and comes with an aggressive design. The router will go against the other Wi-Fi 6-capable routers in the market. It offers a quad-core CPU, 1GB RAM, RGB lighting, four antennas, OFDMA, 2.5 Gbps ethernet ports, triple game acceleration, and AX technology, among other features.

The Asus ROG Rapture GT-AX6000 comes in a stealthy black colour with the Asus ROG logo in red and a “ROG” branding. It gets adjustable quad antennas, LED indicators on the front, and I/O ports at the rear. It gets Asus’ Aura RGB lighting effects for aesthetics. The router comes with WPS, reset, power, and LED control buttons.

The router is powered by a quad-core 2.0 GHz 64-bit Broadcom processor. It is equipped with 256MB of flash memory and 1GB of RAM. It features the latest Broadcom Wi-Fi 6 chipset for enhanced wireless rates of up to 6,000 Mbps. Furthermore, Asus’s RangeBoost Plus offers an increased signal range and stable connectivity at all times. The RangeBoost Plus feature also supports Triple-Level Game Acceleration, for a lag-free gaming experience.

The new ROG Wi-Fi router can be utilised to set up a mesh Wi-Fi network with any ASUS AiMesh-compatible router as a mesh node for an improved signal range, faster speeds, reliable connectivity, and also to eliminate dead spots in the house. Additionally, the Mobile Game Mode prioritises your smartphone connection and offers low latency and lower ping times.

The Asus ROG Rapture GT-AX6000 gaming router comes at a hefty price tag of ₹38,000. It will go on sale starting this month and can be purchased online and via authorised Asus stores.