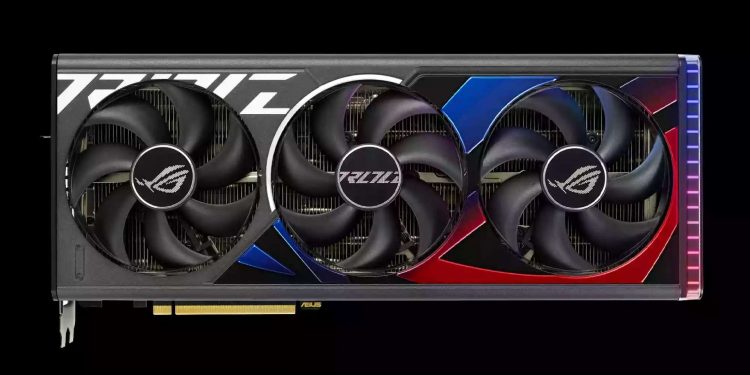 At the top is the ROG Strix RTX 4090 with 24GB GDDR6X memory. It features a 3.5-slot design, held by a die-cast metal frame, with a shroud and backplate in place. The Strix RTX 4090 also features a redesigned cooler with 30% more surface area, a new heatsink with a new vapour chamber and more.

The axial-tech fans in the GPU have also been upgraded to feature seven blades and full barrier rings. The company claims 23.8% more airflow, and 19.3% more pressure than the previous fans. As for the PCB, Asus has delivered a 12+4 phase system with 70A power stages, two per phase, a digital controller and more. The Strix RTX 4090 is also adorned with ARGB taillights that sync with Asus’ Aura Sync, two FanConnect II headers, and silent 0db technology.

While the Strix variant is for flashy extroverts, the TUF RTX 4090 has more stealth. All three new cards are being launched under the more affordable TUF series, with the TUF RTX 4090 on top.

TUF’s version of the RTX 4090 is thicker than the Strix version with 3.65-slots, but is actually slightly smaller at 348mm, offering more choice in case compatibility. The TUF RTX 4090’s cooler has a die-cast unibody shroud that connects directly to the aluminium backplate to strengthen the overall structure, protecting the card from sagging, without compromising on the airflow. This one too gets the new Axial-tech fans with a new vapour chamber cooling technology, dual BIOS switch, and more.

All three new RTX 40 series cards need a lot of power to run. So, it’s not surprising that Asus has recommended using some of its most powerful PSUs to power the new GPUs. Among the ones compatible are the ROG Thor 1000P2, ROG Thor 1200P2, and the ROG Loki SFX-L 1000W Platinum.