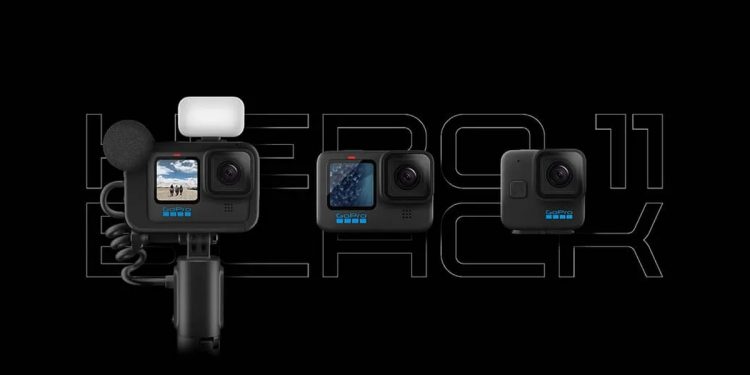 The company adds that the GoPro Hero 11 Black series of cameras utilize HyperSmooth 5.0 tech to keep the camera steady even if rotates a full 360-degree while shooting. The cameras are equipped with a new hyper-immersive HyperView digital lens, which purportedly captures the widest angle 16:9 shot natively by a Hero camera.

Additionally, the GoPro Hero 11 camera lineup utilises TimeWarp 3.0, which allows the cameras to shoot at 5.3K. That’s a massive improvement from 4K. The battery also gets a significant upgrade with the Enduro Battery, which reportedly increases recording times up to 38 percent for the Hero 11 Black. Enduro comes separately in the box with the Hero 11 Black and Hero 11 Black Creator Edition. Meanwhile, the Hero 11 Black Mini has a built-in Enduro battery.

The GoPro Hero 11 Black flaunts GoPro’s signature Hero camera design. It is targeted at professionals and photography enthusiasts and can shoot videos in Cinematic 5.3K at 60FPS and 2.7K at 240FPS. The camera has a 27MP sensor for high-res photos.

The device is claimed to be waterproof up to 33ft. Besides the GoPro Hero 11 Black camera, the retail box includes a carrying case, Enduro Rechargeable Battery, mounting buckle + thumb screw, curved adhesive mounts, USB-C cable, as well as an SD card.

The GoPro Hero 11 Black Creator Edition is designed for vlogging, live streaming, and filmmaking. Its ultra-lightweight body makes it easier to hold. It can record videos in 5.3K and comes with powerful LED lighting.

The device includes an external mic input, a directional microphone, an HDMI port for external displays, and two cold shoe mounts. GoPro claims that the device can record 4 hours of 4K videos per charge.

The GoPro Hero 11 Black Mini is a smaller sibling of the Hero 11 Black, yet it packs all the features of the flagship model. Its small size makes it convenient to attach to your gear, allowing you to shoot videos from new vantage points. Its one-button design lets you point and shoot with a simple touch of the button.