Intel Arc A770 GPU Finally Gets Launched, Priced At $329: Specifications 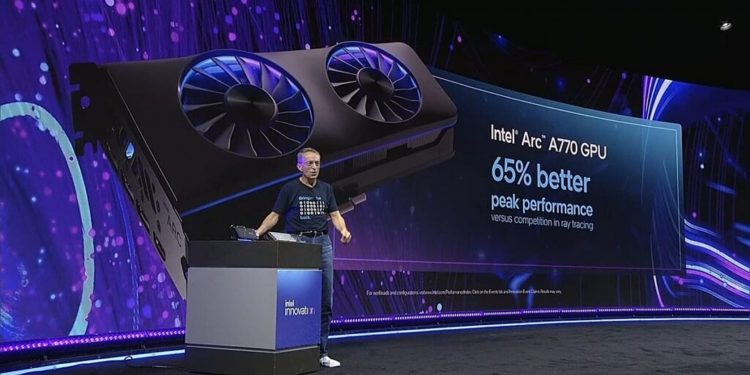 After years of teasing gamers with the thought of Intel-powered discrete GPUs, Intel has finally launched the Arc desktop GPUs at the Intel Innovation Event on Wednesday. The tech giant launched the Arc A770 GPU, which according to Intel, is aimed to take on the Nvidia GeForce RTX 3060 and the AMD Radeon RX 6650 XT GPUs. Essentially, these are mid-range graphic cards that Intel claims offer excellent gaming performance on a budget.

Intel Arc A770 GPU: What’s In Store For Gamers?

The Arc A770 GPU is capable of both 1440p gaming and up to 65 per cent stronger peak ray tracing performance over its rivals, said Intel without naming any specific competitor. However, much like the competition, Intel is relying on good old super sampling as the Arc A770 supports Xe Super Sampling (XeSS) standard, which relies on AI upscaling of pixels to boost frame rates at higher resolution. The same technology is also used by both Nvidia and AMD, however XeSS is an open-standard supported by Intel’s discrete and integrated GPUs. The company said over 20 games will support the upscaling technology by the end of 2022.

Intel’s discrete GPUs have been a long time coming. The first offering, the Arc A380 was made exclusive to China. So, this mid-range GPU is really the first one for a global audience. The launch date was pushed back multiple times, but there’s finally a date of availability with the company promising multiple third-party builds around the GPU.

Intel Arc A770: Pricing And Availability

The Arc A770 GPU will start shipping from October 12 with prices starting at $329 (roughly ₹26,900). The pricing and timing both seem quite advantageous for Intel, as Nvidia aims for the high-end with the flagship RTX 4000 series cards while AMD simply delivered a small speed bump on the existing RX 6000 line. As a result, the Arc A770 has a chance to stand out as a viable option for budget builds, as its competitor, the RTX 3060, is priced higher.

Intel lifted the unboxing embargo of the cards on September 5, and reviews will start rolling out from October 5, for gamers like us to see what to expect from Intel’s first discrete GPU for a global audience.