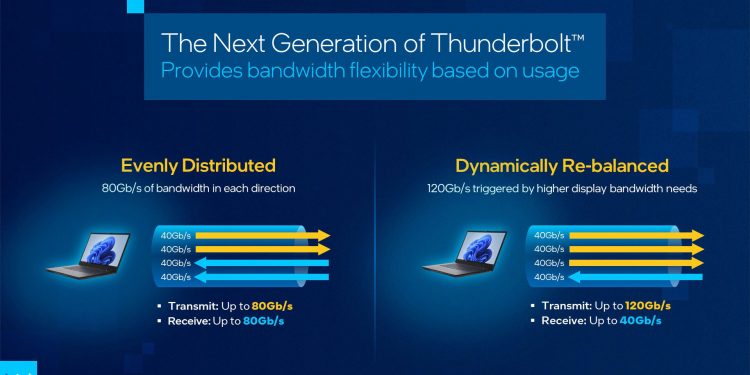 Hot on the heels of the launch of USB 4 version 2, Intel is dishing out more details on its next generation Thunderbolt port that plays a dual role of matching the specs of the latest USB version and also doubling up as a DisplayPort 2.1 as well.

The chipmaker previously showcased the next-gen Thunderbolt connector capable of 80Gbps connection, almost twice that of Thunderbolt 4. Now, Intel has surpassed that record with a prototype that clocked 120Gbps in “video-intensive usages.”

The next generation Thunderbolt port, yet to be named officially by Intel, has been demonstrated to have a faster throughput of 120Gbps, over the previous 80Gbps record. The Thunderbolt port typically allocates equally to both transmit and receive at 80Gbps speed simultaneously. However, with the new interface that Intel has prototyped, Thunderbolt can trigger higher display bandwidth needs by dynamically re-balancing the transmission and reception of data.

With the latest showcase, Intel has matched the specifications released by the USB-IF for USB 4 version 2. However, while USB 4 v2 is capable of going up to 120Gbps, that was claimed to be an optional feature by Intel. Instead, USB 4 v2 will default at 20Gbps. However, the next-gen Thunderbolt connector will require the 80Gbps and up to 120Gbps speeds for certain video workloads consistently. That basically guarantees results, while with USB 4 v2, you may be left guessing.

The latest Thunderbolt port also works with passive cables up to one meter in length, ensuring backwards compatibility. It can also support twice the PCI Express data throughput as compared to the previous version.

Thunderbolt ports are preferred by creative professionals and gamers. Intel licenses the technology to companies like Apple to use on their MacBooks, and are also found in Windows PCs and Chromebooks. The primary advantage of a Thunderbolt port is the consistent throughput that allows for stable connection to high resolution displays, faster flash storage, and more.