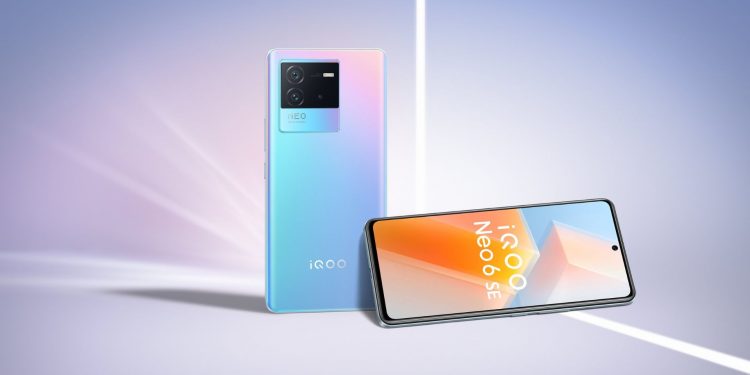 iQOO is all set to launch the next Neo series smartphone, dubbed the iQOO Neo 7 SE, on December 2, 2022 in China. The upcoming iQOO smartphone was recently spotted on the Geekbench benchmark website with the model number V2238A. The listing confirmed that the iQOO Neo 7 SE will be powered by a MediaTek Dimensity 8200 processor. Ahead of the launch, the device has appeared on the TENAA certification website. The database reveals all the key specifications of the upcoming iQOO Neo series device. Let us take a look.

As seen in the images above, the iQOO Neo 7 SE has been listed on the TENAA certification website with the model number V2238A. Based on the database, the iQOO smartphone will feature a 6.78-inch AMOLED display with a 1,080×2,400 pixel resolution, 120Hz refresh rate, an in-display fingerprint scanner, and a centered punch-hole notch. As mentioned earlier, the iQOO Neo 7 SE will come equipped with an octa-core MediaTek Dimensity 8200 processor.

For photography, the smartphone will offer a triple-rear camera setup including a 64MP main camera and a couple of 2MP auxiliary sensors. The upcoming iQOO smartphone will feature a 16MP selfie snapper for selfies and video calls. The smartphone will be backed by a 4,880mAh dual-cell battery with support for 120W fast charging.

The iQOO Neo 7 SE is reported to launch in three memory variants: 8GB, 12GB, and 16GB. Users will also get three storage options: 128GB, 256GB, and 512GB. The smartphone will most likely arrive with LPDDR5 RAM and UFS3.1 storage. As for the colour variants, the upcoming Neo 7 SE will be launched in three options: Intersteller Black, Electric Blue, and Galaxy.

Are you excited about the upcoming iQOO Neo 7 SE smartphone? Do let us know in the comments section below.