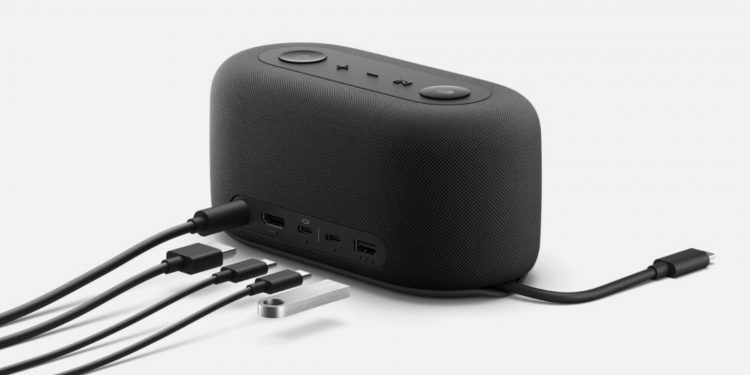 Along with the other Surface devices announced by Microsoft at the Ignite 2022 event, the company also launched the Audio Dock, which is a USB-C docking station with double up as your computer’s speakers and microphone system, allowing users to charge their devices from it as well as attend calls on Microsoft Teams.

The Audio Dock works with both Windows and macOS and is described as an “all-in-one speaker phone” that can connect to and charge PCs over USB-C with up to 60W power. This should be enough to top up some Ultrabook laptops. That said, Logitech’s Logi Dock offers 100W of fast charging while doubling as an audio dock.

The Microsoft Audio Dock offers two more USB-C ports with USB 3.1 Gen 2 speeds that support 7.5W charging, and one of them can also double as a DisplayPort over Alt mode. The dock can also be connected to a monitor through an HDMI 2.0 port that supports 4K resolution at 60Hz refresh rate.

The speakers in the audio dock feature Microsoft’s Omnisonic branding, which is the same as the company’s Surface devices. The dock includes a 15W woofer and 5W tweeters, with a sound output at up to 90 dB. Microsoft has also claimed a frequency response of 70-20,000 Hz that drops to 200-8,000Hz for conference calls. There’s also a specific button to accept calls on Microsoft Teams. When in the call, the button can be used for raising a hand. The company has promised to support calls on Google Meet and Zoom as well.

The audio carries two microphones which are forward facing and has noise reduction, with omnidirectional pickup. The mute button lights up for you to easily know if you are muted or not.