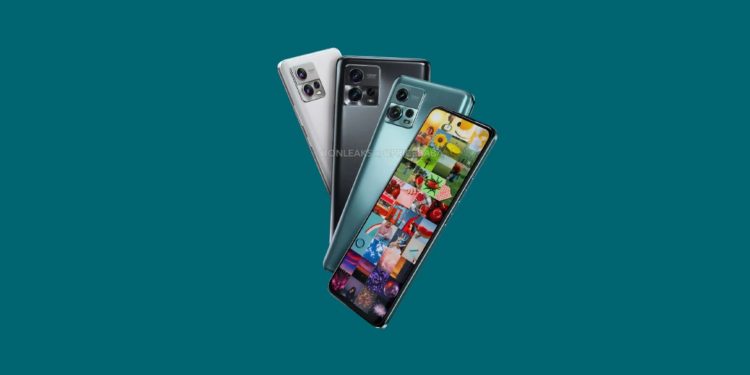 Motorola is on a launch spree, with the company launching devices almost every month. Just last month, the brand launched the Moto G62 5G and the Moto G32 in the Indian market. It appears that Motorola has one more smartphone under its Gx2 lineup: the Motorola Moto G72. In a new development, the renders and specifications of the upcoming Moto G72 have now surfaced on line, courtesy of OnLeaks and Pricebaba. As per the report, the Moto G72 will make its debut this month.

Let us take a closer look at the Motorola Moto G72 renders, specifications, and features.

The leaked renders reveal that the Moto G72 will launch in three colour options: blue, silver, and black. The front panel of the device shows a full-screen display and a chin. The rear panel of the device reveals a triple-rear camera setup housed inside a rectangular module placed in the top left corner. The device appears to have a flat edge design with a curved back panel. The report reveals that the Moto G72 is codenamed Victoria22 and carries model number XT2255-2.

The upcoming G-series smartphone is said to offer a 6.5-inch OLED display panel with a centered punch hole notch and an in-display fingerprint scanner. The handset will reportedly be equipped with a 5,000mAh battery unit and 33W fast charging support. It is said to come pre-loaded with Android 12, but as usual, it will be topped with MyUX skin.

On the optics front, the upcoming Moto G72 will sport a 108MP primary shooter, an 8MP ultra-wide-angle lens, and a 2MP depth sensor at the back. For selfies and video calls, it might rely on a 16MP front shooter. The handset will be available in 4GB, 6B, and 8GB RAM configurations. In terms of storage, users will have the option to choose between 128GB and 256GB storage.

What do you think of the Moto G72? Do let us know in the comments section.