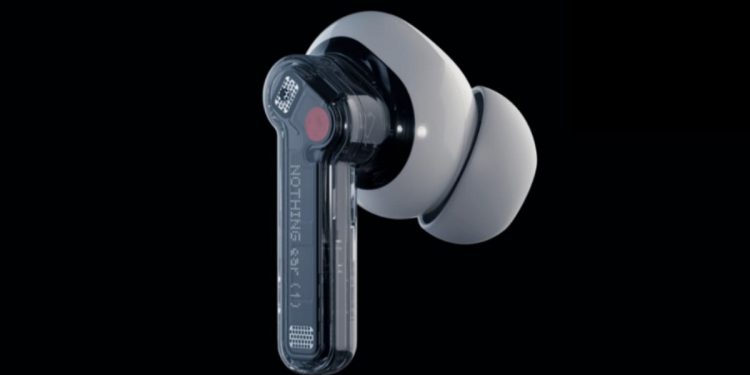 Nothing is all set to unveil its first ever smartphone, the Nothing Phone (1) on July 12, 2022. However, that’s not all we should expect to see from the brand this year. A fresh report suggests that the brand might be gearing up to launch a pair of earbuds that looks almost similar to the previously launched Nothing ear (1). The Nothing ear (1) Stick is expected to launch sometime later this year.

Nothing Ear (1) TWS Earbuds With A New Design

It has been a year since the Nothing ear (1) TWS earbuds were launched. Now, a new picture of Nothing earbuds has popped up, courtesy of notable leakster Mukul Sharma. The new earbuds appear to flaunt a slightly different design from the previously launched Nothing ear (1) TWS. As seen in the image above, Nothing ear (1) branding on the stems of the originals have been replaced with ear (1) Stick. We can also see two dots at the bottom instead of one previously.

We will also get to see a completely different design for the earbuds case, which looks like a stick, hence the new name Nothing ear (1) stick. This could be considered as a minor refresh, as there are no other design changes to be seen in the image. There are also chances that the new earbuds might feature the exact same design as the old ones, just with a new case. That said, we can expect the upcoming Nothing ear (1) Stick TWS to come with upgraded specifications at the very least.

Will you be interested in using an upgraded version of the Nothing ear (1) TWS earbuds? Do let us know in the comments section below.