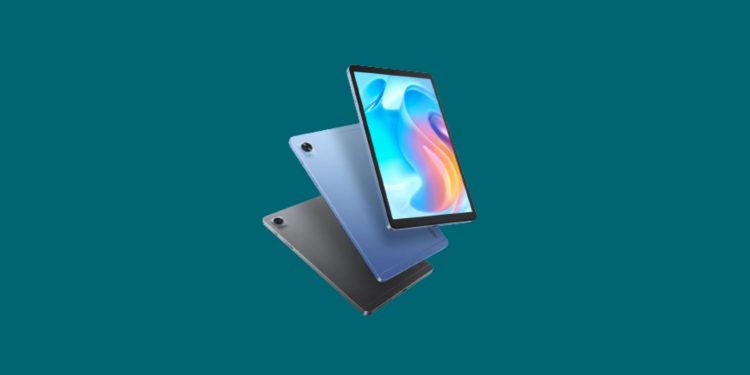 Last year, Realme forayed into the Android tablet segment with the Realme Pad. The device was immensely popular since it brought a really good price to performance proposition to the table. Now, the brand is gearing up to launch a new Android tablet—the Realme Pad Mini. The upcoming Realme tablet has been in the news for a while and its renders were also leaked in the past.

Ahead of the launch, the upcoming Realme tablet has also been listed on an e-commerce website, Lazada. Let us take a closer look at the Realme Pad Mini design and specifications.

The upcoming Realme Pad Mini appears to have a design language similar to that of the Realme Pad. This means that it will have a flat edge design and offer a metal back. It will feature a dual stereo speaker setup, one of which will be located on the bottom edge and the other will be placed along the top edge. The right edge of the Realme Pad Mini will house the power button and the volume rockers.

The Realme Pad Mini will be launched in two colour options—black and blue.

The Realme Pad Mini will offer an 8.7-inch LCD display with a 1,340 × 800 pixel resolution and about 85% screen-to-body ratio. It will also support Sunlight mode.

Under the hood, the Realme Pad Mini sports an octa-core Unisoc T616 processor, fabbed on a 12nm process. The system on chip brings with it an integrated Mali G57 GPU. The Realme Pad Mini will be offered in two memory configurations—3GB and 4GB. Users will get an option to choose between 32GB and 64GB onboard storage.

The Realme Pad Mini will feature an 8MP rear camera and a 5MP selfie shooter. It will be equipped with a 6,400mAh battery unit and will support 18W fast charging. It will also support reverse charging. The device has a Type-C charging port, a micro-SD card slot, and a dual stereo speaker setup.

What do you think of the Realme Pad Mini? Do let us know down in the comments section.