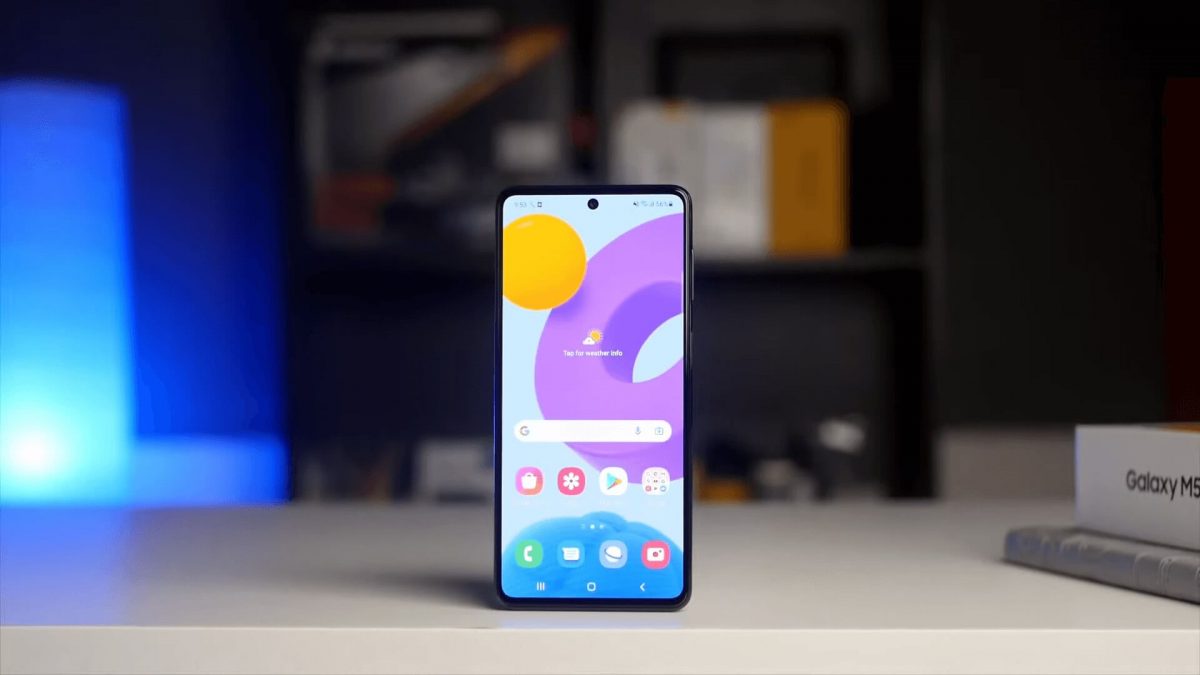 Samsung recently launched a new premium mid-range smartphone: Galaxy M52 5G. It could be seen as a trimmed-down variant of the Galaxy A52s 5G with a lower price tag while still keeping most of the critical features. It uses the same 120Hz Super AMOLED display and the powerful Snapdragon 778G processor as the Galaxy A52s 5G. However, it cuts down on some features like OIS for the primary camera, stereo speakers, 5G connectivity, Wi-Fi 6, and an IP rating. The Galaxy M52 5G comes with a bigger display and a bigger battery, though, which could be helpful for many users.

Priced at just ₹25,999, does it offer more value than the Galaxy A52s 5G and rival smartphones like the Realme GT Master Edition and the Xiaomi Mi 11 Lite 5G NE? We will answer that in our in-depth Galaxy M52 5G review. Until then, let us have a look at our first impression of the smartphone and the unboxing experience in our video embedded below.

The Galaxy M52 5G features a 6.7-inch Super AMOLED Infinity-O display with Full HD+ resolution and a 120Hz refresh rate. It is an excellent screen for watching videos, browsing the web, playing games, and even using day-to-day apps. Yes, it misses out on the in-display fingerprint reader found on the Galaxy A52s 5G, but the side-mounted fingerprint reader is plenty fast. The device feels sleek and lightweight, which is refreshing after using bulky devices in the price segment.

Samsung has equipped the Galaxy M52 5G with a powerful Snapdragon 778G processor to support such a gorgeous display. Even though it is not a flagship tier processor like the Snapdragon 870 or the Snapdragon 888, the Snapdragon 778G chipset still offers enough grunt to sail through most heavy apps and graphics-intensive games like Battlegrounds Mobile India and Call Of Duty: Mobile. Unless there is something seriously wrong with the phone’s thermal performance, the phone should be fast enough to not seem like a problem for most users. It has 6GB/8GB RAM, 128GB internal storage, and a microSD card slot (up to 1TB) for storage expansion.

At the front, the smartphone has a 32MP selfie camera, which is bigger than what you can find on most other similarly-priced smartphones. The Galaxy M52 5G can record 4K 30fps videos using the selfie camera, which is a first in its price segment. At the rear, the smartphone has three cameras: 64MP primary camera with PDAF and F1.8 aperture, a 12MP ultrawide camera with F2.2 aperture, and a 5MP macro camera with a fixed-focus lens. The rear-facing camera setup can record 4K 30fps videos as well. In terms of camera, the Galaxy M52 5G has the potential to beat most of its rivals.

It is a 5G smartphone with advanced connectivity features like Wi-Fi 6 and Bluetooth 5.0. It has a dual-SIM card slot, GPS, NFC, and a USB 2.0 Type-C port as well. However, it lacks a dedicated headphone jack. The Galaxy M52 5G is powered by a 5,000mAh battery that is compatible with 25W fast charging. Going by Samsung’s track record, the phone’s battery can be fully charged using a 25W USB PD charger in just over an hour. However, the company has cut some corners on the front and is shipping a measly 15W charger in the box. So, if you want faster charging, you will have to shell out another ₹1,499 to get a 25W USB PD PPS charger.

The Galaxy M52 5G is an exciting smartphone. In fact, it could be the best mid-range smartphone Samsung has released over the past couple of years. Will it defeat its rivals? We will find that out in our in-depth review. So, stay tuned for our review. Until then, you can read our hands-on review and unboxing of the Galaxy A52s 5G.