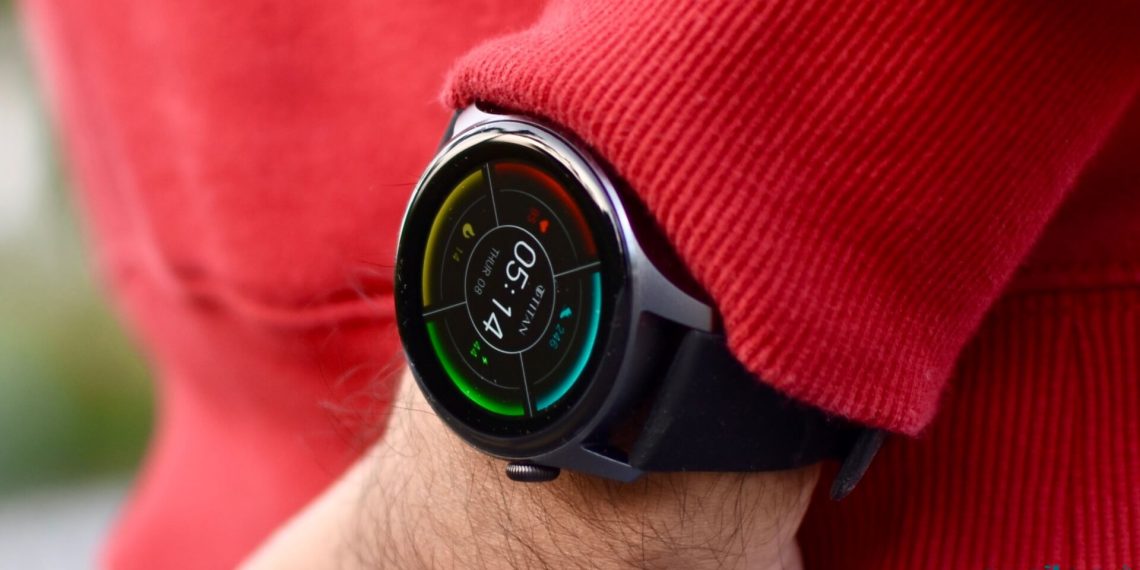 Titan, one of the biggest wristwatch makers in India, started selling its own smartwatches a few years ago as people are increasingly drawn towards feature-rich smartwatches and fitness trackers. I reviewed a couple of Titan smartwatches—Titan Smart (Review) and Titan Smart Pro (Review)—earlier. A few days ago, I got the chance to review the Titan Smart Talk, the company’s first smartwatch with a built-in loudspeaker for Bluetooth calling.

It features a big OLED display, health tracking, workout tracking, and week-long battery life. Priced at ₹9,995, it competes with the likes of the Amazfit GTR 2, Amazfit T Rex Pro, and the Samsung Galaxy Watch 4 (which usually sells for around ₹10,000 during festive sales). Is it good enough to beat them? Let’s find out in my Titan Smart Talk review.

Similar to Titan’s previous smartwatches I’ve reviewed, the Titan Smart Talk features a circular case and a soft silicon strap. Its metal case has two buttons on the right side, and it is IP68-certified for dust and water resistance. The lugs on the case are compatible with standard 20mm watch bands/straps, which means that you can attach any standard watch strap of your liking. The bundled silicon strap has a push-release mechanism to make things even easier.

The watch case is solidly built, and I didn’t notice any build quality issues. The watch is easy to wear and feels comfortable to wear for days on a stretch. During the review period, I removed the Titan Smart Talk from my wrist only while bathing, which proves its comfort levels.

The smartwatch’s power button, placed on the top right side, is shaped like a crown and it rotates, too, but rotating it doesn’t do anything in the UI. The button’s rotating action serves no actual purpose. I was confused by the company’s decision to let it rotate even though it is dysfunctional. Other users might get confused, thinking that it acts like a digital crown on the Apple Watch and many other smartwatches.

Similar to the Titan Smart Pro that I reviewed earlier, the Titan Smart Talk also features an OLED screen. Since it is big, bright, and pixel-dense, watch faces look good. It is also easy to read under direct sunlight and has mineral glass protection. Titan hasn’t specified which brand’s mineral glass it has used, though.

Unlike the Titan Smart Pro, which probably had a 30Hz refresh rate and felt jagged, the Titan Smart Talk has a 60Hz display, so animations look pleasing. Still, competing smartwatches have slightly better screens, especially in terms of touch sensitivity and accuracy. They also look closer to the surface, probably because of better optical bonding with the glass surface.

Sometimes, the screen didn’t wake up instantly when I raised my wrist to check the time. It sometimes took a couple of seconds to wake up, and that frustrated me. There is no screen timeout setting, which makes things even more frustrating as the screen turns itself off after just a few seconds, even while you’re in the middle of performing some action. And since there is no touch-to-wake feature on the Titan Smart Talk, you have to click one of the buttons to turn the screen on.

As I mentioned earlier, the smartwatch features a loudspeaker and a microphone for taking calls via Bluetooth from the connected smartphone. The call quality was surprisingly clear. I took a few calls on the Titan Smart Talk, and the audio was loud and clear, going by smartwatch terms. The person on the other side of the call was able to hear me clearly and didn’t think that I was talking through a smartwatch or wireless earbuds, which says a lot of positive things about the Titan Smart Talk’s call quality.

This is where a lot of my issues with the Titan Smart Talk (and all other Titan smartwatches) stem from. Rather than using Wear OS or Zepp OS, the company uses its proprietary software, which isn’t very good. It’s not even competitive. The software has very few built-in apps, let alone support for third-party apps. And the UI design feels archaic. For example, all the quick-setting toggles have different colours, and there’s no semblance of uniformity or proper UI design language.

The animations and transitions don’t inspire a lot of confidence. In fact, sometimes I got confused about whether my touch was registered by the watch as the touch animations aren’t clear enough. The order of the apps and widgets isn’t customisable. You can neither customise watch faces like you can on Wear OS or Zepp OS nor install third-party watch faces. There is only one watch face that lets you add your own image as the background. The complications on watch faces aren’t clickable, so when you click on your steps figure, the watch doesn’t take you to the fitness or workout app.

I used the smartwatch paired with my Samsung Galaxy Z Fold 4 and used the Titan Smart app. For a couple of weeks, I also used it with the Apple iPhone 14 Pro to check the Titan Smart app’s performance and feature set. The app’s design is outdated, and there are a lot of bugs when used on a foldable phone’s bigger screen. These are just a few major issues I’ve faced during my two-week review period. There might be other issues that users might find out after using the device for a longer period.

Clearly, Titan either needs to work incredibly hard on the software front or switch to an operating system like Wear OS, which would solve a lot of the company’s issues. But for that to happen, the company needs to use a better chipset and memory, which would add to the cost of the watch.

The saving grace on the performance front is the Titan Smart Talk’s decent health and fitness tracking features. Its heart rate, SpO2 measurement, and workout tracking accuracy were in line with most smartwatches and fitness trackers priced below ₹10,000. I compared the watch with the Galaxy Watch 4 (₹9,999 during festive sales), Amazfit Bip 3 (₹3,499), and the Apple Watch Series 7. During my daily 45-minute walks, the Titan Smart Talk displayed around 10% fewer steps and distance compared to the Apple Watch Series 7. That’s decent considering the Titan Smart Talk lacks onboard GPS.

The two areas where I felt the watch’s performance wasn’t on par are the lack of onboard GPS and inaccurate sleep tracking. In particular, the Titan Smart Talk wasn’t able to detect and measure my mid-day naps. Sleep tracking during the night wasn’t perfect either. I slept for 6.5 hours, but the smartwatch only measured around 4.5 hours of sleep. Hopefully, software updates will improve sleep tracking. If you want to track your runs and cycling more accurately, you need to carry a paired smartphone for GPS data.

The speed of the watch’s software is decent. Apps open in a jiffy, and the software doesn’t slow down. The watch has built-in storage space to store close to 50 music tracks for offline playback. You can connect the watch to your PC via the supplied USB Type-A charging cable, and the phone’s internal storage shows up as a flash storage drive where you can store MP3 music tracks. You can play that music while working out through Bluetooth earphones.

The Titan Smart Talk lasts more than week on a single charge. I set the heart-rate monitoring to an interval of five minutes (more frequent than the default setting of 30 minutes). Despite this change, the smartwatch lasted close to a week on a full charge. It is similar to most smartwatches from the likes of Amazfit, Dizo, Realme, and OnePlus, and much better than Wear OS-based smartwatches and Apple Watches.

Who Should Buy Titan Smart Talk?

The Titan Smart Talk is a decent smartwatch for those who want a bright OLED screen, casual workout tracking, and, more importantly, good audio quality during voice calls. Its battery life is good, too. However, it lacks GPS and has multiple issues when it comes to software features. Its companion app needs a lot of work, and the watch faces aren’t very functional. If you’re happy with the things I talked about, then you can get the Titan Smart Talk.

As there are better alternatives out there for around ₹10,000, I would recommend going with the Amazfit GTS 2, Realme Watch 3 Pro, or the Samsung Galaxy Watch 4 (when it is on sale for ₹10,000). The Amazfit GTS 2 has a sleek design, quality software, and higher customizability. The Realme Watch 3 Pro is priced at just ₹5,000 and features Bluetooth calling and better software. The Galaxy Watch 4 has just a 2-day battery life but brings tons of features and much better integration with Android smartphones.

The Titan Smart Talk has a bright OLED screen, decent workout tracking, and very good audio quality during voice calls. Its battery lasts around a week on single charge. However, it lacks GPS, which is present in a lot of similarly-priced smartwatches. Its software, watch faces, and companion app need a lot of work. There are better smartwatches out there in the same price segment.