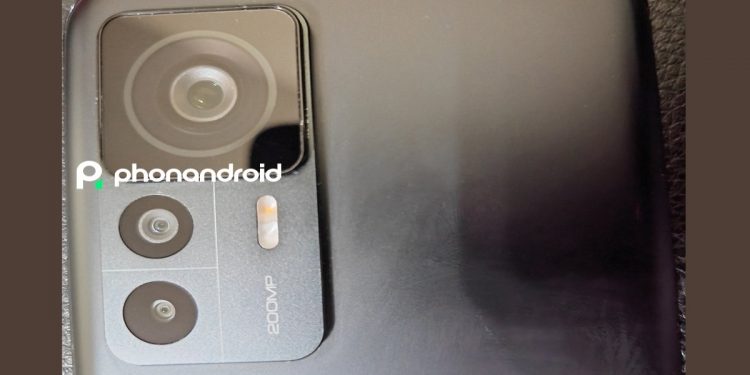 The Xiaomi 12T Pro was spotted on the IMEI database and multiple certification websites such as FCC and China’s 3C certification last month. Now, the folks over at Phonandroid have managed to lay their hands on a live image of the device believed to be the upcoming Xiaomi 12T Pro. Going by the picture, the design is similar to the recently launched Redmi K50 Ultra as speculated. However, the smartphone is expected to be equipped with a higher resolution primary camera sensor compared to the 108MP on the Redmi K50 Ultra.

The image shared by the publication reveals the camera module design of the Xiaomi 12T Pro with “200MP” badging. Though the camera island is similar to the Redmi K50 Ultra, the primary sensor is larger in the Xiaomi 12T Pro. If the leaked details hold true, this could be the first ever Xiaomi phone to come with a 200MP camera. It could be the same image sensor that debuted with the Motorola X30 Pro smartphone in China.

The 200MP Samsung ISOCELL HP1 sensor comes in 1/1.22-inch size with an f/1.9 aperture, OIS, and 16-in-1 pixel binning in the Moto X30 Pro. However, it remains to be seen if Xiaomi includes OIS in their own iteration. The 200MP monster can also shoot stills at 12.5MP and 50MP resolutions. The ancillary cameras are expected to be a mediocre 8MP ultrawide shooter and a 2MP macro sensor. In terms of video, the primary camera could come with up to 8K video recording capabilities.

The Xiaomi 12T Pro may sport a 6.67-inch OLED display panel with a 1.5K resolution, similar to the one on the Redmi K50 Ultra. It will be powered by Qualcomm’s flagship Snapdragon 8+ Gen 1 chipset, which is built on TSMC’s 4nm fabrication process. The device will be equipped with up to 12GB of LPDDR5 RAM and up to 512GB of UFS 3.1 storage. It may pack in a 5,000mAh battery pack coupled with 120W HyperCharge fast charging support.