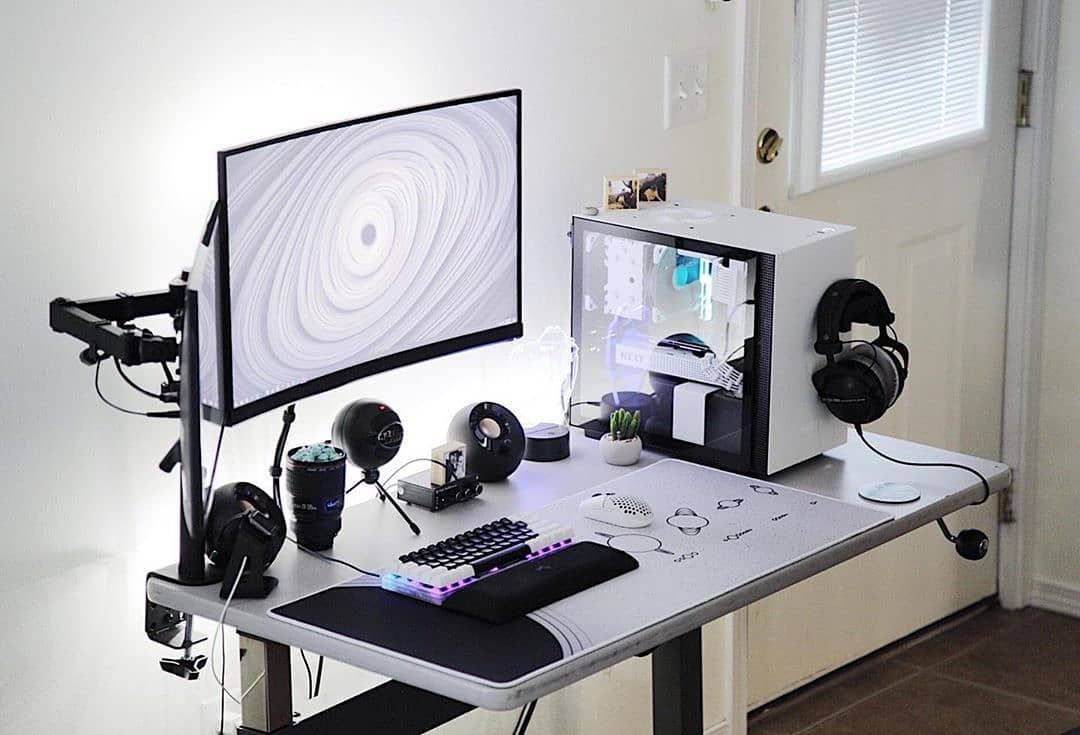 Whether you want the best gaming PC build under ₹70,000 or a gaming laptop, this is not the right time to do so because CPU and GPU prices are extremely inflated right now due to chip shortages. And it is expected that the situation won’t improve until next year. However, if you still want to go ahead and build a gaming PC with a budget of around ₹75,000, we have made your job a bit easier. We have extensively researched all the PC components, including the CPU, GPU, motherboard, RAM, storage, case, power supply, and cooling, and shortlisted the best ones so that you don’t have to spend your time researching again.

We wanted to fit in a CPU that has a relatively newer architecture (but not the latest generation to save on costs), at least four cores, multithreading. In terms of GPU, it is a bare minimum in 2021 to have a GPU that is powerful enough to run games at 1080p resolution and more than 60fps at medium to high settings. There were plenty of motherboard options, but we preferred the one that has at least four USB 3.2 Gen 1 ports, at least one USB Type-C port, an HDMI port, and an optical port for multichannel audio.

In terms of memory, while 8GB is enough right now, it would be better to futureproof the PC and get 16GB RAM in dual-channel mode. SSDs have become extremely affordable, and you can now buy a 1TB PCIe NVMe SSD for fast booting, installing and running games, and opening heavy apps. For the power supply, we preferred at least a 650W PSU with a fully modular design and an 80+ certification. Due to the limited budget, we spent the lowest on the PC case, but we made sure that you can get a decent-looking case with a tempered glass side panel to show off your RGB stuff in the future.

AMD is killing it right now in the CPU segment with its Ryzen 5000 series processors. The company’s latest offerings beat Intel’s best desktop CPUs in both single-threaded and multi-threaded performance. It is winning in gaming as well as productivity tasks. It is AMD’s golden era right now. The launch of new Ryzen CPUs means that prices of previous-generation processors have dropped a bit, and we were able to find an excellent CPU for your PC build. The Ryzen 5 3400G uses the Zen+ architecture, which is still plenty fast for the price. It has six cores and twelve threads. It has a base clock speed of 3.7GHz and a boost clock speed of 4.2GHz. It uses TSMC’s 12nm process, which is still on par with most Intel desktop CPUs. It means that it has good power efficiency.

It even features built-in Vega 11 graphics, which means that you can still build your PC without a GPU right now. Then, you can wait a few months and buy a graphics card if you don’t have enough cash to burn on a GPU right now. The Ryzen 5 3400G also comes bundled with a CPU cooler (Wraith Spire) in the box. It is compatible with PCIe 4.0 and has a TDP of 65W. It is compatible with up to 64GB of 2,933MHz DDR4 RAM in a dual-channel configuration.

It is a great CPU for a mid-range gaming PC build as it offers equally good gaming and productivity performance, at least for the inflated prices we’re seeing right now. Our earlier PC build for ₹70,000 included the Ryzen 5 3500X with 6 Zen 2 cores and 12 threads, but CPU prices have jumped a bit over the past couple of months, and we had to drop to the Ryzen 5 3400G to stay around the ₹70,000 figure. Still, the Ryzen 5 3400G is not a bad processor by any means.

This is where you’ll spend most of your money. Graphics cards are extremely expensive right now, and we wish that wasn’t the case, but it is what it is. You can either get the Zotac GeForce GTX 1650 OC for around ₹21,500. We would be lying if we say that you can buy any recent GPUs from AMD or Nvidia at their MSRPs (Manufacturer’s Suggested Retail Price). You should not hope to buy a GPU at its MSRP for the next couple of years. In most AAA games, you can expect to get around 60fps at Full HD 1080p resolution and ‘Medium’ or ‘High’ graphics settings with the GeForce GTX 1650 with 4GB VRAM.

While most people would advise you to spend a little less on the motherboard, we advise spending a bit more on a motherboard. Better motherboards provide more stability, better firmware support, and features like a CLR CMOS button in case something goes wrong while overclocking or vertically mounting a GPU. In this case, we went with the ASRock B550M Steel Legend. It not only offers compatibility with Ryzen 5000 series CPUs for futureproofing but also has excellent build quality.

What more can you ask at this amazing price? Well, it would’ve been perfect if it had Wi-Fi and Bluetooth, but you can easily add them through a ₹1,000 wireless adapter.

Although 8GB RAM is enough for most tasks, it is hard to find a pack of two 4GB sticks these days at good prices. Plus, we would recommend getting 16GB of DDR4 RAM for future-proofing your gaming PC build. We were able to find 8GB ADATA XPG Gammix D30 Series 8GB DDR4 RAM at just ₹3,475. You can buy two such RAM sticks for a total of 16GB RAM. That is good enough to hold a large AAA gaming title along with game streaming software in the memory without knocking off everyday apps. And yes, we’ve not chosen an ARGB RAM stick because we think having more RAM is more important than having a shiny RGB RAM stick with less memory.

The SilverStone FARA R1 is a great case for just ₹3,199. It is available in both black and white colours, which means you can go with the PC colour theme that you prefer. The front of the case has a mesh for higher air intake. There is a full-sized tempered glass panel on the left side, which means you can showcase your PC’s internals (and RGB stuff).

It can fit full-sized ATX motherboards and six fans (three 120mm or two 140mm fans at the front, one 120mm fan at the rear, and two 120mm or 140mm fans at the top). You can fit an AiO liquid cooler. If you mount the radiator at the front, you can fit up to 280mm radiator, but if you decide to fit the radiator at the top, you can go as high as 240mm. It also has one 3.5-inch HDD drive cage and four 2.5-inch drive cages.

At the front, there are two USB 3.0 Type-A ports, one USB 2.0 Type-A port, and a headphone/mic combo port for easily hooking up accessories and storage devices. There are fully removable dust filters at the top and bottom, which means it is easier to clean. The only thing we miss is a USB Type-C port at the front, but that is really nitpicking on our part, especially when our motherboard pick has no USB Type-C front panel header.

The Antel ARES AP650 is a great power supply unit for just ₹4,650. It is a fully modular PSU (and the only one below ₹6,000) with 80+ Bronze certification and 650W power output. It has three 8-pin power supply ports for the GPU, four SATA/Molex ports, a 28-pin power supply port for the motherboard, and an 8-pin port for the CPU. It has more than enough power output to power the whole gaming PC build. Even if you upgrade to a beefier GPU a couple of years down the line, it would be able to handle the load.

To go with the white or black PC case (depending on which case colour you go with), you can go with Ant Esports’ SuperFlow 120 Auto RGB v2 ARGB fans. One fan is priced at ₹550 (increased from its original price of ₹499), and buying three of them would cost around ₹1,500. You can mount them at the front of the case for an excellent RGB look.

That’s it! Your gaming PC build is ready. It can offer smooth gaming performance in most modern games at 1080p resolution. Of course, you shouldn’t expect high-refresh-rate gaming (120Hz or more) at this price, especially due to GPU shortages and inflated costs. Still, you can expect a frame rate of around 60fps with this gaming PC build. It can double up as a design or home theatre PC as well. Pair this gaming PC with a great mechanical keyboard, a Logitech G102 Prodigy, and a 1080p gaming monitor, and you’re good to go!

Best Thin and Light Laptops in India (2021): Laptops for Every Budget

Should You Buy an LG Warranty For Your New TV?

Smartwatch Buying Guide 2020: How to Pick up the Best to Suit Your Needs

What’s the Best Laptop for a Medical Student?