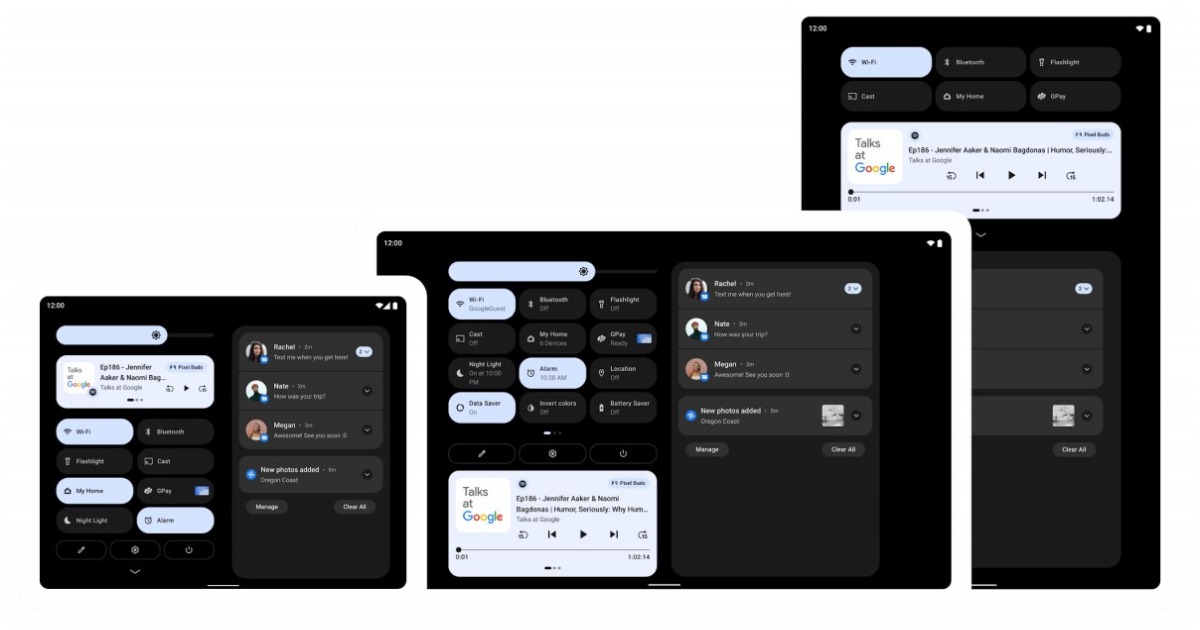 After releasing the stable Android 12 update for Pixel smartphones, Google now has announced Android 12L, which is designed with large-screen devices in mind. It means that Android 12L brings special features and UI design for foldable, tablets, and even Chrome OS devices. In a blog post, Google mentioned that it plans to release Android 12L early next year, in time for “the next wave of Android 12 tablets and foldable devices.” Android 12L brings refined UI across notifications, quick settings, lock screen, overview, home screen, and more for devices with larger screens.

On devices with a screen above 600dp, the notification shade, lockscreen, and other system surfaces use a new two-column layout to take full advantage of the larger screen area. Let us have a look at all the new features of Android 12L.

As explained earlier, Android 12L brings a multi-column layout to large-screen devices like foldable smartphones, tablets, and Chrome OS devices. It would also serve well for upcoming foldable tablets. The notifications shade is divided into two halves, one showing more quick setting toggles and the other showing notifications with more information. The Settings app, lock screen, and most stock apps show a two-column layout. Developers can make certain changes to their apps to add multi-column layouts to their apps, which would work great on foldable phones, tablets, and even Chrome OS laptops.

Coming back to the Android 12L features, multitasking will be more powerful and intuitive in the Android 12L. The taskbar will also make the split-screen mode more discoverable than ever. Google mentions that it has improved compatibility mode with visual and stability improvements to offer a better letterboxing experience for users. Last but not least, the letterboxing can be easily customizable by device manufacturers, who can now set custom letterbox colours or treatments to adjust the position of the inset window, apply custom rounded corners, and more.

Google is also asking developers to highly recommend checking out how your apps will work in split-screen mode with windows of various sizes. Along with the Android 12L, Google also has included a handful of new APIs for developers, along with a new API level. Google said, “We’ve been careful not to introduce any breaking changes for your apps, so we won’t require apps to target 12L to meet Google Play requirements.”