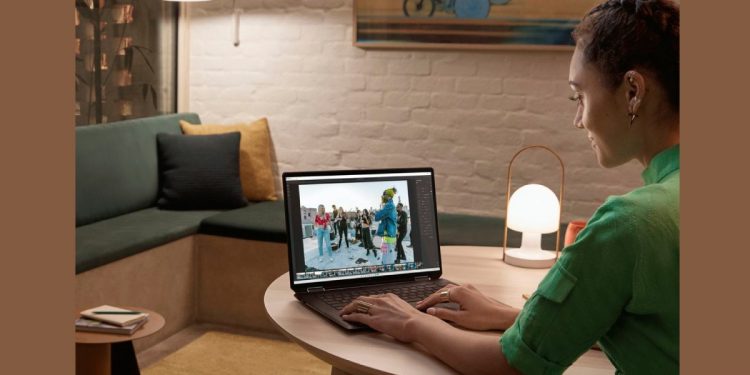 HP has introduced its 2022 versions of the Spectre x360 16 and Spectre x360 13.5 laptops in the Indian market. These are 2-in-1 convertible laptops that come with a 360-degree hinge that allows them to be used in tent mode, tablet mode, or flat lay mode. The new laptops pack in Intel’s 12th Gen Intel Core processors, 4K OLED touch displays, high screen refresh rates, HP Auto Frame camera, and quad speakers, among other features.

Both the HP Spectre x360 16 and HP Spectre x360 13.5 come with a premium aluminium build and a sleek design. The laptops flaunt 4K OLED displays with 120Hz refresh rate and 400nits of peak brightness. The displays are TUV Rheinland certified for blue light emissions. The notebooks come with an optional MPP 2.0 tilt stylus pen, which can be useful for doodling or taking notes. Alternatively, the display can be operated via its touchscreen and includes several gestures.

Both laptops are powered by Intel’s 12th Gen Core i7 processors. The bigger 16-inch model comes with an Intel Arc GPU. They are equipped with up to 16GB LPDDR4 RAM and up to 1TB PCIe NVMe TLC M.2 SSD storage.

The new HP Spectre x360 laptops feature a 5MP IR webcam with HP’s Auto Frame camera, which is advertised to keep the subject in focus at all times. Additionally, the Backlight Adjustment, directional beamforming microphones, HP presence, and GlamCam features enhance the audio and video calling experience. The laptops also come with a Bang & Olufsen quad-speaker setup for clear sound during calls and for entertainment purposes.

The 2022 versions of HP Spectre x360 laptops are claimed to deliver up to 17 hours of battery backup on a single charge. They get fast charging support, which can juice them up to 50 percent in just 45 minutes. Other noteworthy features include support for Wi-Fi 6E, Bluetooth v5.2, two Thunderbolt 4 with USB4 Type-C ports, one SuperSpeed USB Type-A port, one HDMI 2.0b, one audio jack, fingerprint sensor, microSD card reader, and backlit keyboard. The notebooks run on Windows 11 out of the box.

The HP Spectre x360 16 price is ₹1,39,999 in India. The HP Spectre x360 13.5 is priced at ₹1,29,999. You can buy the laptops from HP’s website, HP World Stores, Croma, or Reliance stores. They come with colour options of Nightfall Black with Pale Brass accents and Nocturne Blue with Celestial Blue accents.