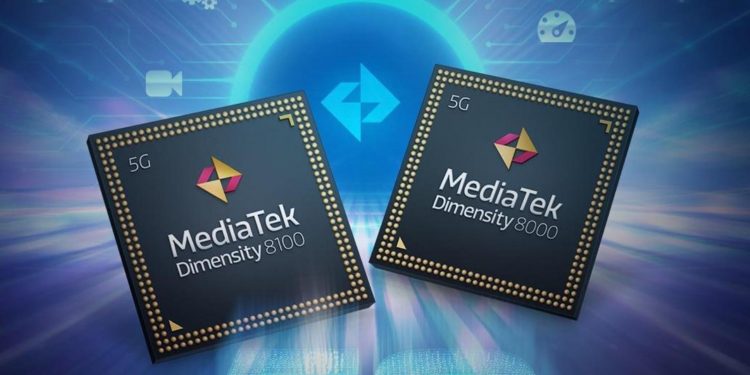 Note: Some smartphones in our list have not been officially announced yet, but are confirmed to feature a MediaTek Dimensity 8000 or Dimensity 8100 processor.

The OnePlus 10R has not been announced yet, but it is almost confirmed to be powered by the MediaTek Dimensity 8100 processor. We can expect the device to launch in India on April 28, 2022, alongside the OnePlus Nord CE 2 Lite 5G and the OnePlus Nord Buds.

The OnePlus 10R could feature a 6.7-inch E4 AMOLED panel with Full HD+ resolution and a 120Hz refresh rate. Given the brand’s history, we can expect the OnePlus 10R to feature stereo speakers and a good quality AMOLED screen with an under-display fingerprint scanner.

The OnePlus 10R is said to be powered by a Dimensity 8100 processor. It was recently confirmed that the device will be powered by the MediaTek Dimensity 8000 series processor. The device could potentially launch in a 12GB RAM and 256GB storage variant. There will likely be no scope for storage expansion. The upcoming smartphone will likely boot Android 12-based OxygenOS 12 out of the box.

In terms of cameras, the device is expected to feature a 50MP main camera with OIS, an 8MP ultrawide camera, a 2MP macro camera, and a 16MP front-facing camera. It could support up to 4K 60fps video recording using the primary rear-facing camera.

The OnePlus Ace started appearing in rumours a few days ago. The phone’s moniker was spotted on the company’s official website. Judging by the listing, it is safe to say that the OnePlus Ace could soon launch in China and India. Though not much is known about the OnePlus Ace, it has appeared in a couple of certification agency databases, giving us a working clue as to what some of its specifications and features could be.

The most notable feature of the OnePlus Ace could be its 160W fast charging support. It features a MediaTek Dimensity 8100 processor, 12GB RAM, and Android 12. The phone is also expected to feature a 120Hz AMOLED panel. This is pretty much all that is known about the phone. Given that it will be the first smartphone in the OnePlus Ace series, OnePlus will most likely want to try its best to make it a compelling deal for potential customers.

OPPO recently unveiled an entry-level smartphone in India, called the OPPO K10. While the device has a good value-for-money factor, OPPO has other plans for the Chinese markets when it comes to the OPPO K10 series.

Turns out, OPPO will soon launch the OPPO K10 and the OPPO K10 Pro smartphones in China. The vanilla OPPO K10 is said to be powered by a MediaTek Dimensity 8000 processor, 8GB RAM, and 128GB internal storage. While the display specifications aren’t known at the moment, the OPPO K10 is tipped to feature a high-refresh-rate IPS LCD screen.

Realme recently launched the Realme GT Neo 3 in China and will soon launch it in India. The device offers a lot of value at its price. It has a 6.7-inch AMOLED screen with Full HD+ resolution, a 120Hz refresh rate, up to 1,000Hz instant touch sampling rate, 100% DCI-P3 colour gamut, and Corning Gorilla Glass 5 protection. It could have an in-display fingerprint reader that can double up as a heart-rate monitor.

Under the hood, the device is equipped with the MediaTek Dimensity 8100 processor, up to 8GB RAM, and up to 256GB onboard storage space. The Realme GT Neo 3 runs Android 12-based Realme UI 3.0 skin out of the box.

The Realme GT Neo 3 has a 50MP main camera (Sony IMX766) with OIS, an 8MP ultrawide camera with a 119-degree field-of-view, and a 2MP macro camera. On the front, the device has a 16MP selfie camera.

Also Read: Here Is The List Of All Snapdragon 888 Smartphones Launched In 2021

Under the hood, the Redmi K50 comes equipped with the MediaTek Dimensity 8100 processor, which is paired with up to 12GB RAM and up to 256GB storage. In terms of software, the device runs Android 12-based MIUI 13.

For imaging, the device has a 48MP main camera (IMX582) with OIS, an 8MP ultrawide camera with a 119-degree field-of-view, a 2MP macro camera, a Flicker Sensor, and a 20MP front camera. In terms of battery, the Redmi K50 has a decent 5,500mAh battery with 67W fast charging.

Both processors use MediaTek’s Open Resource Architecture (DORA), which enables smartphone makers to add features to their devices.

These are the best Dimensity 8000/Dimensity 8100 powered smartphones that are definitely worth waiting for. Do you think there is any other smartphone that should have made it to the list? Let us know in the comments section below.