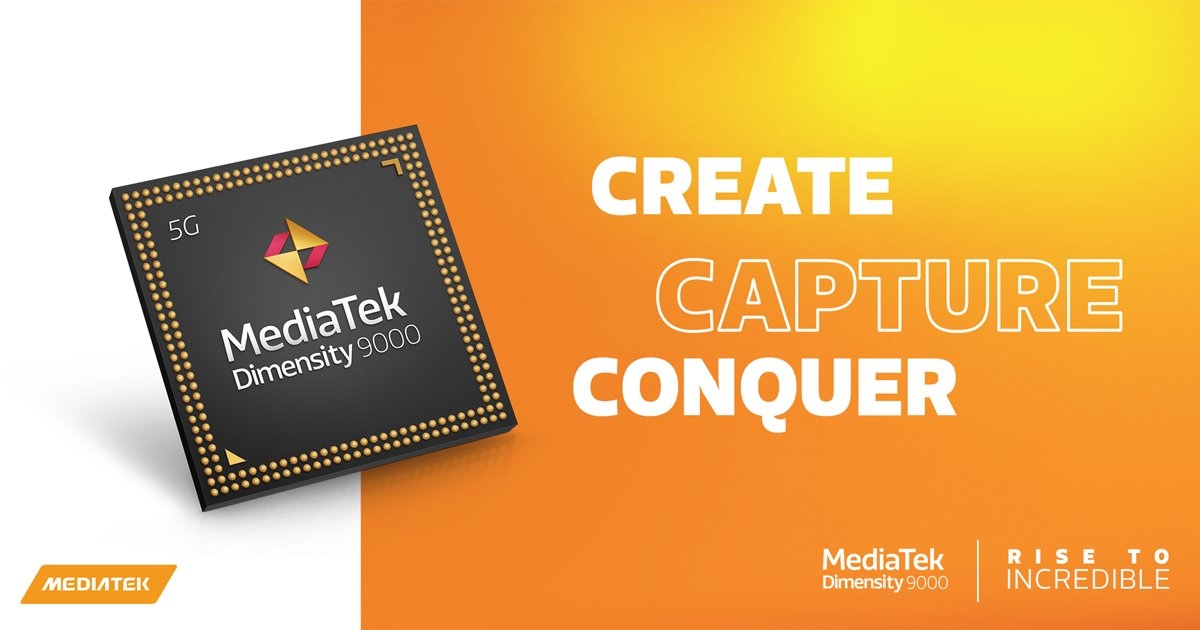 MediaTek announced its most powerful smartphone chipset ever, the Dimensity 9000, in late 2021. It is the world’s first mobile processing chipset that is built on a 4nm fabrication process and it will pack more transistors than any other flagship chipset. In this article, we have collated the list of all MediaTek Dimensity 9000 smartphones that you will be able to buy starting Q2 2022.

In 2020, the company had to cut a few corners with the Dimensity 1200 processor, which meant that it wasn’t in the same league as the Qualcomm Snapdragon 888 in terms of raw processing power. This time though, MediaTek has left no stone unturned in its pursuit to take the crown of the most powerful Android mobile processor for 2022. The company has used the most advanced manufacturing process (TSMC 4nm) and the newest CPU (Cortex-X2, Cortex-A710, and Cortex-A510) and GPU (Mali-G710) cores from ARM. It also uses ARM’s latest GPU, the Mali-G710, for improved gaming performance.

During the Dimensity 9000 launch event, MediaTek claimed that the sustained gaming performance of its new flagship chipset is similar to the best in the industry: Apple A15 Bionic. So, everyone is pretty excited to see how the processor performs compared to the Apple 15 Bionic, Samsung Exynos 2200, and the Qualcomm Snapdragon 8 Gen 1.

The Honor 70 Pro+ has a 4,500mAh battery with support for 100W SuperCharge fast charging over a USB Type-C charging port. Lastly, the Honor 70 Pro+ features Android 12-based Magic UI 6.1 out of the box.

A few leaks suggested that the vanilla OnePlus 10 could be powered by the MediaTek Dimensity 9000. But now a report, claims that it will be the OnePlus 10R. In 2021 we witnessed OnePlus adopting the MediaTek 1200 SoC for its upper-midrange Nord 2 device. If these reports hold true, we may see a first-ever MediaTek chipset powered smartphone in the OnePlus flagship series. It will join the OnePlus 10 Pro, which comes with a Snapdragon 8 Gen 1 processor. It is possible that the OnePlus 10R may come at a more affordable price point than the Pro variant.

From the design standpoint, expect it to carry design cues like the island camera from the OnePlus 10 Pro. It may sport a flat type 120Hz AMOLED display. It will be equipped with at least 8GB of RAM and 128 GB internal storage on the base variant itself. It is likely to drop the Hasselblad tuned cameras to keep the prices in check. The Dimensity 9000 supports global 5G bands on sub-6Hz but lacks on mmWave connectivity. This could be a major deal-breaker in regions like the US, if OnePlus wishes to sell it there. The OnePlus 10R will most likely go on sale in China, while the Indian launch could happen 2-3 months later. Expect it to be priced around ₹45,000- ₹55,000 when it reaches India.

It’s fair to say that the OnePlus Nord 2 is one of the most disastrous products in OnePlus’ history, and it is not because of the MediaTek Dimensity 1200 processor. It is due to the instances of battery explosions. It is the only chink in OnePlus’ shining armour as the company is considered trustworthy. OnePlus might look to rebuild its tainted reputation by introducing the OnePlus Nord 3.

The OnePlus Nord 3 might use the MediaTek Dimensity 9000 processor and a better battery under its hood. Whether the company decides to pull the plug on the Nord 2 or if these two will co-exist will be known in a few months. Expect the Nord 3 to be pricier than the Nord 2 by ₹3,000 to ₹5,000 in India due to the Dimensity 9000’s higher price.

The handset will be equipped with up to 12GB of RAM and up to 256GB of UFS 3.1 storage. In the camera department, it features a primary 50MP Sony IMX766 sensor with OIS and an f/1.7 aperture. The secondary ultra-wide angle also is a 50MP Sony IMX766 sensor with f/2.2 aperture. Lastly, it gets a 13MP  Samsung S5K3M5 telephoto snapper with an f/2.4 aperture and 2x optical zoom capability. Selfie duties are handled by the 32MP shooter housed in the punch hole cutout on the display. Unfortunately, the Dimensity variant misses out on the MariSilicon X NPU, 5-axis OIS (Optical Image Stabilisation), and Hasselblad’s camera tuning, which the Snapdragon variant gets.

The OPPO Find X5 Pro Dimensity Edition is priced at CNY 6,299 (approx. ₹75,500) for the 12GB/256GB memory variant. The device is available in ceramic black and ceramic white colours.

The Realme GT Neo 3T is the successor to the Realme X7 Max in India, which comes with the Dimensity 1200 processor. The Realme X7 Max is a beautiful, slim, and lightweight smartphone, which many gamers raved about in the ₹25,000 price category. You could get one for as low as ₹21,000 with some bank offers. It provides a flagship-level experience without breaking the bank.

Since Realme has decided to scrap the ‘X’ lineup in favour of the ‘GT’ series, the next Dimensity 9000 powered Realme phone could very well be the Realme GT Neo 3T. This might cost anywhere between ₹30,000 and ₹35,000, at least when it goes on sale in the country.

The Xiaomi 12T could be launched sometime in Q2 or Q3 of 2022. It will be an addition to the Xiaomi 12 family, which currently includes the Xiaomi 12X, Xiaomi 12, and the Xiaomi 12 Pro. The Xiaomi 12T will reportedly feature the MediaTek Dimensity 9000 processor. Xiaomi’s Mi series (now, numbered series) smartphones have always been priced at a premium, so expect the Xiaomi 12T to cost upwards of ₹40,000 in India.

Xiaomi VP and General Manager Lu Weibing had confirmed that the Xiaomi Redmi K50 Gaming will use the MediaTek Dimensity 9000 processor. It will replace the Xiaomi Redmi K40 Gaming that came with the MediaTek Dimensity 1200 processor. It could also pave way for the POCO F4 GT, which is essentially the rebranded Redmi K40 Gaming for some regions like India.

The MediaTek Dimensity 9000 processor is made using TSMC’s 4nm semiconductor chip fabrication process, and it is said to be more power-efficient compared to Samsung’s 4nm process which is used to make the Exynos 2200 and the Qualcomm Snapdragon 8 Gen 1. The Dimensity 9000 has a 1+3+4 CPU core configuration. It has one ARM Cortex-X2 CPU core clocked at 3.05GHz, three ARM Cortex-A710 CPU cores clocked at 2.85GHz, and four ARM Cortex-A510 CPU cores clocked at 1.8GHz. It uses ARM’s latest and greatest GPU, the ARM Mali-G710.

MediaTek claims that its ARM Cortex-X2 CPU core provides up to 35% more speed and a 37% improvement in efficiency over the Cortex-X1 CPU found in the Exynos 2100 and the Snapdragon 888. The Dimensity 9000 also ditches the age-old ARM Cortex-A55 CPU cores in favour of the new ARM Cortex-A510 CPU cores, which have higher clock speeds and improved efficiency. The chipset has 8MB of L3 cache and 6MB of SLC (System-Level Cache) in comparison to the 4MB of L3 cache and 3MB of SLC on the Qualcomm Snapdragon 888. The chipset also supports LPDDR5x RAM and UFS 3.1 storage.

MediaTek is bullish about the performance of its 10-core ARM Mali-G710 GPU as well. It is claiming to offer up to 35% faster performance or 60% more power efficiency when compared to the Snapdragon 888’s Adreno 650 GPU. The display driver and the GPU can drive Full HD+ displays at 180Hz refresh rate and QHD+ displays at 144Hz refresh rate. It can drive wireless display mirroring at 4K resolution and 60fps frame rate, complete with HDR10+.

A mysterious Vivo smartphone, equipped with the MediaTek Dimensity 9000 processor, scored a whopping 10,02,220 points on the AnTuTu benchmark. It was the first Android device to break the barrier of one million points. If these results hold true, it could defeat the current AnTuTu topper, the Nubia Red Magic 6 (8,58,734 points), by a huge margin. MediaTek even shared a graph at the launch event suggesting that the Dimensity 9000’s GPU will perform slightly better than Apple’s A15 Bionic chipset, which only time will tell as it doesn’t always reflect in real-usage scenarios.

MediaTek had shared a thermal image of the Dimensity 9000 against its rival chipset. The device remained cool while its competitor displayed signs of overheating. That’s not all. MediaTek even shared a graph displaying 20% better multi-core performance on Geekbench than phones with the Qualcomm Snapdragon 8 Gen 1 processor.

Recently, a YouTuber had the chance to test the performance of an engineering prototype smartphone using the Dimensity 9000 chipset. As you can see in the video below, the testing revealed that the CPU performance of the Dimensity 9000 is faster than the Snapdragon 8 Gen 1. It is even faster than the Apple A14 Bionic in multi-core CPU test but still couldn’t defeat Apple’s 2020 chipset. It is more power-efficient than any other flagship chipset in the Android realm.

The fact that TSMC is reportedly raising the prices by 10-20% suggests that this chipset will cost higher. If some reports are to be believed, it might cost double the price of the Dimensity 1200. MediaTek may be targeting the niche segment with this processor and we may get to see it only in devices in the higher end of the smartphone spectrum.