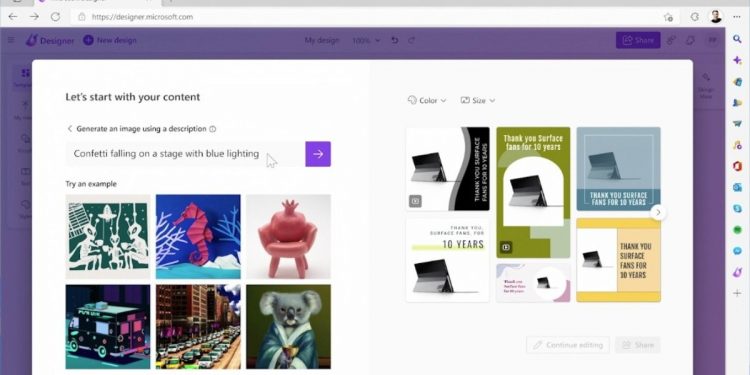 Microsoft revealed the integration of AI-powered image-generation technologies into its Bing search engine, Edge browser, and a new Office software dubbed Microsoft Designer during a press event this week. DALL-E 2 by OpenAI, which made headlines in April for its ability to produce inventive graphics based on textual instructions, will power the system.

Microsoft’s solutions are designed to help artists get through “blank page syndrome” by offering creative alternatives. Microsoft Designer began as a component of PowerPoint, where it now functions as a section that offers design suggestions. However, Microsoft intends to separate Designer into its own Microsoft 365 app, which will be accessible to users of Microsoft 365 Personal and Family plans both as a free app and a paid app.

Microsoft is now just offering a free public web app for Designer, which it will use to collect feedback from test-drivers. In a separate announcement, Microsoft said that Designer will be integrated into Microsoft Edge to provide “AI-powered design ideas to aesthetically improve social media posts and other visual material without having to leave your browser window.” Additionally, DALL-E 2 from OpenAI will power Image Creator on Bing, which will let users provide a prompt and receive a creative output.

By adopting this aggressive AI strategy and working with OpenAI, with DALL-E driving these services, Microsoft is taking a major risk. The creative world has a strong aversion to the tool’s potential audience, and DALL-E has been at the centre of controversy.