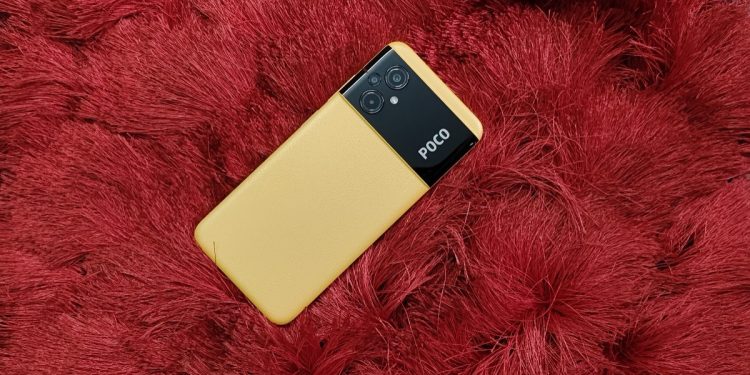 POCO M5 is the spiritual successor to the well-liked POCO M3. The trademark “POCO yellow” colour is back, too, along with the same ‘Among Us’ character-like design that was present in the previous lineup. The POCO M5 is no different from the majority of the company’s smartphones in that it offers competitive specifications for its price.

This time, the POCO M5‘s hardware lineup consists of a Full HD+ LCD panel with a 90Hz refresh rate, the MediaTek Dimensity G99 processor, a 50MP triple-camera setup, a large battery, and much more. All of this is available for the enticing price of just ₹12,499. Can the 4G-only POCO M5, therefore, succeed in the market where there are enough 5G phones already? Let’s find out in our review.

POCO devices stand out from other smartphones in a pool thanks to their distinctive colour and material finish. The POCO M5 follows in the footsteps of the M4 but adds a faux leather touch to the back. Three colour variations are available for the phone, and for this review, we have the POCO Yellow edition with us. Since this is a budget product, the entire construction is made of high-quality plastic, while the front is protected by Gorilla Glass.

The phone has a two-tone appearance because of the placement of the triple camera array and flash, which are on the top left corner and form a star pattern inside a glossy black visor. The 6.58-inch display on the front is surrounded by thick bezels and has a dew-drop-shaped notch. As for the button layout, the left side just contains the SIM tray, while the right side has the volume rockers and the power button, which also functions as a fingerprint sensor. The top of the device has an IR blaster and a 3.5mm audio jack, and the bottom has a USB Type-C port, speaker grill, and microphone.

While the SIM tray features a rubber barrier to prevent water and dust infiltration, there isn’t an official IP rating as such. Despite weighing 210 grams, the POCO M5 has good weight distribution, which, when combined with flat edges, makes it easier to use with one hand.

The POCO M5’s front features a 6.58-inch LCD screen with FHD+ resolution. The panel’s adaptive refresh rate can alternate between 30Hz, 60Hz, and 90Hz. The display feels fluid while swiping and is bright enough to be seen under sunlight. The viewing angles are adequate, similar to a typical IPS LCD panel at this price, but the blacks and colours aren’t as deep as we would’ve liked.

Some buyers might find the teardrop notch and slightly wide chin unappealing, but we didn’t mind it that much, given the price of the phone. Yes, it does appear a little antiquated, but the content is unaffected. Speaking of content, the M5’s panel complies with Widevine L1 certification, which means that you can stream videos from Netflix, Prime Video, and other video streaming apps in Full HD, but it lacks HDR capabilities, which is completely acceptable given the phone’s price.

It should be noted that occasionally, especially when scrolling through the UI, small micro stutters may be present. These can be attributed to the MIUI optimization and not a defective display.

The POCO M5 features a triple-camera setup on the rear, with two symmetrical, substantial rings holding the 50MP primary and 2MP macro cameras, while the other ring consists of a 2MP sensor. We aren’t fully sold on the selection of the sensors and believe that an 8MP ultrawide camera would have been a better fit. The selfies on the phone are taken by an 8MP front-facing camera tucked away in the dew-drop notch.

The phone comes with a familiar camera app that is present on other MIUI-powered devices and has all the crucial modes neatly laid out. Regarding camera performance, the main camera takes some decent pictures in daylight with slightly cooler colour tones. The shots are well-detailed, although sometimes the highlights are overexposed. The differences between photos taken with HDR and those taken without it are minimal. Additionally, unlike many other MIUI-powered handsets, this one does not support AI Colour mode.

We anticipated that nighttime shots would be average from the outset. However, the phone does manage to take some respectable pictures indoors, which is the surprising part. As for the other two sensors, they make hardly any difference at all, and as we mentioned in the previous section, it would have been wiser to get rid of them and replace them with an improved ultra-wide angle lens.

The front-facing camera on the POCO M5 is a mixed bag. Most of the time, the colours in the selfies appear washed out, although this can be changed in the future with an OTA. Having said that, the camera captures stunning portraits with a linear background-blur effect and great subject recognition.

The POCO M5 ships with the Android 12 operating system with Xiaomi’s custom MIUI 13 skin on top. The phone has the August security patch as of the time of this review, and POCO has promised to release a new security patch every three months. POCO uses its own POCO launcher with custom icons on top of MIUI 13, a separate experience from what Redmi or, for that matter, Xiaomi smartphone users get.

When compared to custom skins from other OEMs, MIUI 13 is often fairly feature-rich. However, for budget smartphones, it can occasionally be a little too much. Unfortunately, the POCO M5 suffers from the same issue. Random notifications from apps that we would classify as bloatware frequently bombard you. Fortunately, they can be removed. A few stock apps push “recommended content” and send out annoying notifications, but at least they can be turned off easily.

Our main complaint with MIUI is its aggressive RAM management, which instantly kills background apps when the phone is set aside. Due to the delay in notifications, you will need to reopen the app in order to see them. Although there is a feature that allows you to keep the apps running in memory, it is buried deep within the settings.

Powering the POCO M5 is the brand-new MediaTek Helio G99 SoC. This new 4G SoC from MediaTek is built on the same platform as the well-liked Helio G96. This chip is designed to appeal to audiences looking for a performance-focused chip in the sub-₹15,000 price range. POCO gave up on 5G on the M5 in favour of features like an adaptive refresh display, a triple-camera setup, and a big battery in order to compete in that lower price range.

While we don’t think it makes sense to benchmark a phone in the sub-₹13,000 price range, we did attempt some popular benchmarking apps for audiences who are interested in learning about the performance of the phone. The phone achieved single-core and multi-core scores of 556 points and 1,924 points in GeekBench v5. In AnTuTu v9, the POCO M5 scored 3,66,800 points. In 3DMark’s Wild Life test for graphics performance, the phone scored 1,239 points and a frame rate of 7.4fps. We played every major game currently available on the phone, including Call of Duty Mobile, for around an hour at a time to assess the phone’s actual performance, and the phone performed admirably given its pricing.

The POCO M5 functions well in everyday use and shouldn’t present any significant problems. No matter what the situation was, we never noticed the phone becoming excessively hot during our testing period. Yes, the phone does take a little while to switch between apps, but that is to be expected from a budget smartphone with a heavy software skin with lots of bells and whistles. The only difficulties we have are with MIUI’s bloatware and aggressive RAM management, which we hope will be fixed on subsequent devices.

The POCO M5’s battery life is one of its main selling points. The phone has a sizable 5,000mAh battery inside. We put the phone through its paces throughout our tests, but we weren’t able to empty the cell in a single day. For users with low to moderate usage, this phone will easily last close to two days. On the plus side, the battery can be recharged fairly quickly as well; with the included 22.5W charger, the phone can be fully charged in around 1 hour and 45 minutes.

You would have observed the growth of the roster over the years if you had been paying careful attention to the POCO M lineup. The POCO M5 adds several new features while building on earlier iterations. The phone does have some positive qualities working in its favour, such as an attractive design, a sizable battery, and a respectable processor. However, there are still a lot of problems, such as MIUI’s aggressive RAM management, bloatware, and unwanted push notifications from pre-installed apps.

The catch here with the POCO M5 is that it lacks 5G connectivity at a time when two carriers have already launched 5G networks in the country. Overall, the POCO M5 is a decent phone for those wishing to upgrade from a feature phone or an entry-level smartphone to a budget smartphone at the current price of ₹12,499.

The POCO M5 is a decent phone with a lot of features going in its favor and for those wishing to upgrade from a feature phone or an entry-level smartphone to a budget smartphone at the current price of ₹12,499.