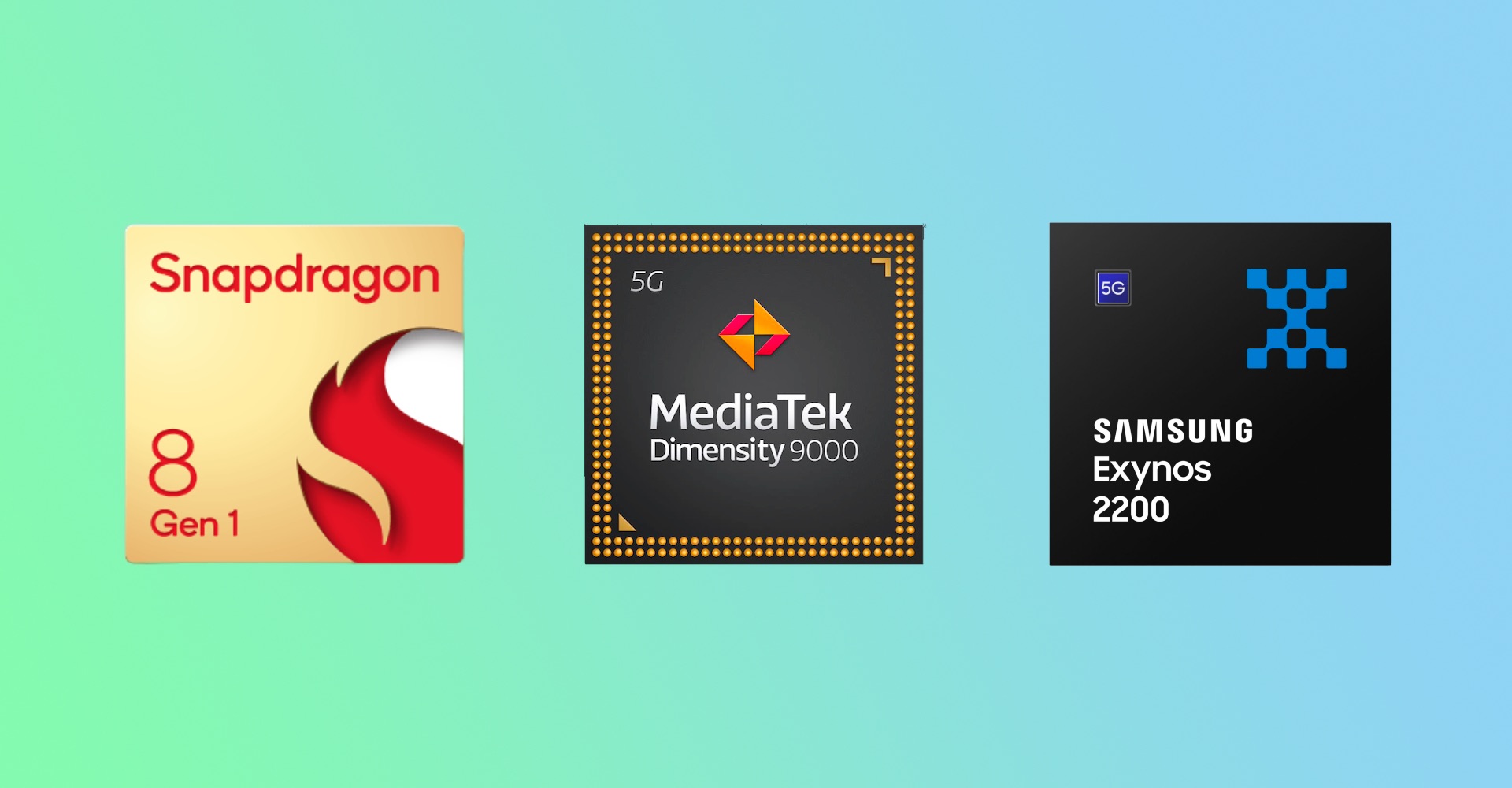 Now that MediaTek, Qualcomm, and Samsung have unveiled their flagship smartphone processors for 2022, we have a fair idea of what to expect from these chipsets. Qualcomm and Samsung were considered the top dogs in the market, but this year could be different. MediaTek claims that it has the best high-end chipset this year, and that could turn out to be true since it is using the same CPU architecture and a better fabrication process.

Let us have a look at the comparison of their specifications and try to find out which chipset has the chance to beat its rivals.

The Qualcomm Snapdragon 8 Gen 1, MediaTek Dimensity 9000, and Samsung Exynos 2200 will be used in high-end smartphones, and they have a lot in common. All three are made using a 4nm fabrication process. However, the Dimensity 9000 uses TSMC’s (Taiwan Semiconductor Manufacturing Company) 4nm node, which is considered to be better than Samsung Foundry’s 4nm process that is used to make the Snapdragon 8 Gen 1 and the Exynos 2200.

The new processors use completely different GPUs. The Snapdragon 8 Gen 1 uses Qualcomm’s self-designed Adreno GPU, the Dimensity 9000 uses the ARM Mali-G710 MC10, and the Exynos 2200 uses the Xclipse 920 GPU that is based on AMD’s RDNA 2 architecture. The RDNA 2 is used in the latest flagship gaming consoles (Microsoft Xbox Series X and Sony PlayStation 5)

The Snapdragon 8 Gen 1 is touted to offer 20% faster CPU processing and 30% higher power efficiency than the Snapdragon 888, owing to the new generation CPU cores. It has 6MB of shared L3 cache and 4 MB of SLC (System-Level Cache).

The Snapdragon 8 Gen 1 smartphones are already out there for purchase, and users have reported close to 10,00,000 points after running the AnTuTu benchmark. However, the device gets hot and the scores drop to around 8,00,000 points after multiple benchmark attempts. That’s a 20% drop in performance under sustained workloads.

MediaTek claims that the Cortex-X2 core gets a 35% speed boost and a 37% improved efficiency over its previous-generation flagship chipset. The Dimensity 9000 has 8MB of L3 cache and 6MB of SLC. Hence, it would be fair to assume that the Dimensity 9000 could be a bit faster than the Snapdragon 8 Gen 1.

A mysterious Vivo smartphone was spotted using the Dimensity 9000 processor, scoring a whopping 10,02,220 points on the AnTuTu benchmark. Real-world performance can only be known when new smartphones powered by this processor are out in the market.

Samsung has kept mum about the CPU clock speeds and cache sizes on its newest flagship process. So, we can’t comment on how it stands against the two here. However, we have benchmarks of all three here for reference.

All three processors in question are fairly close to each other as far as synthetic benchmarks are concerned. The current AnTuTu topper, the Nubia Red Magic 6, has 8,58,734 points, and new smartphones powered by these new generation processors could very well take its crown away.

Qualcomm has decided to name the GPU just Adreno for the Snapdragon 8 Gen 1. It is claimed to offer a whopping 30% increase in performance when compared to the Snapdragon 888’s Adreno 660 GPU. The GPU supports high-refresh-rate displays, HDR gaming, volumetric rendering, and VRS (Variable Rate Shading).

The Dimensity 9000 employs a 10-core ARM Mali-G710 GPU. MediaTek claims to offer a 35% performance boost and 60% more power efficiency than the Snapdragon 888’s Adreno 660 GPU. During the launch, MediaTek claimed that the Dimensity 9000 performs slightly better than Apple’s A15 Bionic chipset in terms of gaming.

The Exynos 2200’s Xclipse 920 GPU is based on AMD’s RDNA2 architecture. Samsung is bullish about its GPU performance and says it will bring console-like graphics on smartphones. Samsung says the Xclipse 920 GPU supports advanced features like hardware-accelerated ray-tracing (RT) and VRS (Variable Rate Shading) which are usually only seen on console and PC-grade GPUs.

The Dimensity 9000’s triple-ISP can capture 4K HDR video on three cameras simultaneously. It can record videos at 8K resolution at 24FPS. It can handle three 32MP cameras and is the world’s first ISP capable of shooting 320MP still images. It supports displays with up to a 180Hz refresh rate at Full HD+ resolution and a 144Hz refresh rate at QHD+ resolution. The chipset gets a 6-core APU (Accelerated Processing Unit) with four performance and two efficiency cores, promising up to 4x performance over the previous generation MediaTek flagship processor.

The Samsung Exynos 2200’s ISP supports up to 200MP camera sensors. It has the ability to record 8K videos at 30FPS or 4K videos at 120FPS. The chipset supports HDR10 and HDR10+ content playback and recording. It also supports QHD+ 144Hz or 4K 120Hz displays with HDR10+.

The Dimensity 9000 incorporates a 6-core MediaTek APU 590, which is the company’s fifth-generation AI processing unit and promises enhanced gaming, multimedia, camera, and browsing. It also promises up to 4x more power efficiency.

The Exynos 2200 uses a dual-core NPU for hardware-accelerated AI (Artificial Intelligence) processing, coupled with a DSP (Digital Signal Processing). Samsung states that the NPU’s performance is doubled compared to the Exynos 2100.

All three chipsets are extremely well-equipped and can offer satisfying performance in real-life tasks and gaming. However, only side-by-side testing can reveal the real winner. Once smartphones with each of these processors are launched, we will do side-by-side performance testing and reveal our findings.

Going by preliminary results available online, the Dimensity 9000 appears to be a more stable performer. The Snapdragon 8 Gen 1 could have the most powerful graphics performance. The Exynos 2200 could end up being the slowest of the three, but only by a small margin. Nevertheless, it should still offer satisfying performance in day-to-day life.