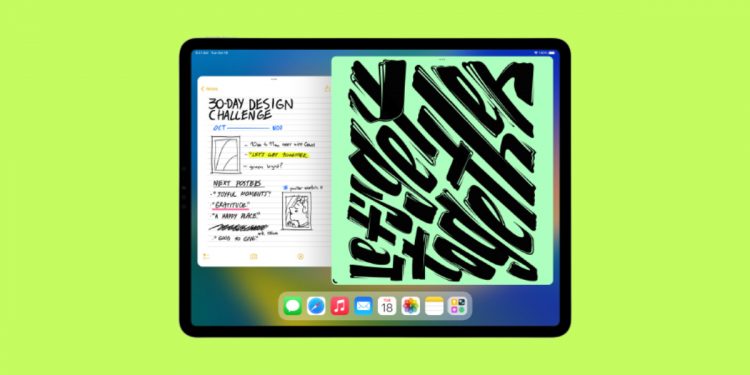 Alongside releasing iOS 16.1, Apple also has released the iPadOS 16.1 software update after months of beta testing. The release of the iPadOS 16 was delayed by one month since Apple required more time to test its Stage Manager feature.

The new iPadOS software update is available in the form of an OTA and can be downloaded on all compatible iPads. The update also includes iCloud Shared Photo Library feature, other app updates to Mail, Messages, Safari, new display modes, a new Weather app, Live Text and much more. Let us take a look at the iPadOS 16.1 features.

The most important feature which Apple has added in iPadOS 16.1 is the Stage Manager. This new feature lets users create multiple different-sized windows for various applications, and then switch between them. When announced first, this feature was set to be released only for the M1 iPads including iPad Air and iPad Pro. However, after a few weeks, Apple backtracked and said that the Stage Manager would also debut for the iPad Pro models released from 2018 to 2020.

Moving on to the rest of the features, the iPadOS 16.1 also includes iCloud Shared Photo Library, a new feature that lets users share photos and videos with up to five other people. The update also lets you edit messages, and brings new changes to the Mails app, Safari, and Passkeys. Furthermore, the newer iPadOS software version also contains the Weather app, Game Center, Live Text Video support, redesigned Home app, and a host of new changes.

– Library filters for quickly switching between viewing the Shared Library, your Personal Library, or both libraries together

– Sharing toggle in Camera lets you choose to send photos you take straight to the Shared Library, or enable a setting to share automatically when other participants are detected nearby using Bluetooth

– SharePlay in Messages lets you enjoy activities like watching movies, listening to music, playing games, and more with friends while messaging

– Follow‑up surfaces sent emails that have not been replied to, to the top of your inbox so you can quickly follow‑up

– Reference Mode delivers reference color for popular color standards and video formats on the 12.9-inch iPad Pro with Liquid Retina XDR display and with Sidecar, use it as a reference display for your Apple silicon Mac

– Weather app on iPad is optimized for the larger display, including immersive animations, detailed maps, and tappable forecast modules

– Weather maps show precipitation, air quality, and temperature alongside the location view or in full screen

– Air quality displays a color coded scale for air quality, level and category, and you can view air quality on a map to see related health recommendations, pollutant breakdown, and more

– Animated backgrounds represent the sun position, clouds, and precipitation with thousands of variations

– In-Game Dashboard Activity shows you what your friends are accomplishing in this game, and what they are playing and achieving across all games in one place

– Transit fares show you how much your journey will cost in the San Francisco Bay Area, London, New York, and more

– Home tab now integrates all your accessories, rooms, and scenes into a single tab for a whole-house view, allowing you to see your entire home at a glance

– New camera view displays up to four cameras front and center in the Home tab, scroll to see any additional camera views in your home

– Matter, the new smart home connectivity standard, is supported enabling a wide variety of smart home accessories to work together across ecosystems

– Favorites give you easy access to the channels and topics you read the most, in a consistent place near the top of your Today feed

– Improved child account setup makes it easier to create an account for a child with the right parental controls, including age‑appropriate media restrictions

– Family Checklist gives you tips and suggestions like updating a child’s parental control settings, turning on location sharing, or just reminding you to share your iCloud+ subscription with everyone

– Menus provide additional context for actions such as close, save, and duplicate, making it easier to edit documents and files in apps like Pages and Numbers

– Find and Replace is available in apps across the system, including Mail, Messages, Reminders, and Swift Playgrounds

– Emergency reset lets you quickly take action to reset access across all people and apps, including disabling location sharing via Find My, resetting privacy permissions for apps, and more

– Door detection in Magnifier locates a door, reads signs and symbols around it, and gives you instructions for how to open the door

– Buddy controller helps users with cognitive disabilities get support from a caregiver or friend while playing a game, by combining inputs from multiple game controllers into one

– VoiceOver is now available in over 20 new languages and locales, including Bangla (India), Bulgarian, Catalan, Ukrainian, and Vietnamese

– Voice Control spelling mode gives you the option to dictate names, addresses, or other custom spellings letter by letter

This release also includes other features and improvements:

– Handoff in FaceTime allows you to move FaceTime calls seamlessly from your iPad to your iPhone or Mac, and vice versa

– Search on the Home Screen enables Spotlight to be accessed directly from the bottom of the Home Screen, making it easy to open apps, find contacts, or get information from the web

– Rapid Security Response gets important security improvements to your devices even faster, as they can be applied automatically between standard software updates

With the new iPadOS 16.1, Apple has also patched some security-related vulnerabilities in the new software update. The list of the same is available in Apple’s security support document.

Have you updated your iPad to iPadOS 16.1? Do let us know in the comments section below.