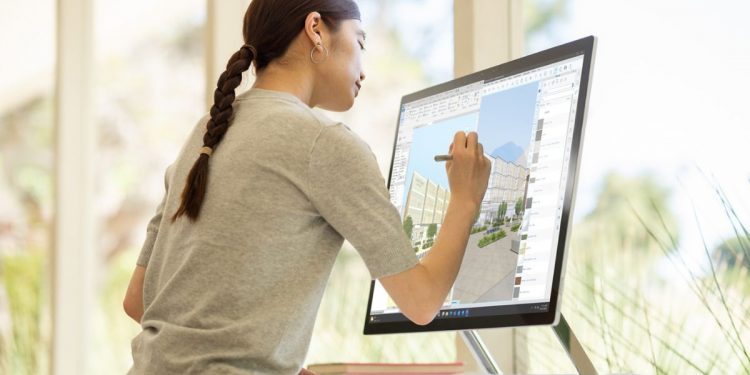 In terms of specifications, the Microsoft Surface Studio 2+ features a 28-inch display that offers a 4,500×3,000 pixel resolution. The machine comes equipped with Microsoft’s Pixel Sense touch technology and supports the Zero Gravity Hinge System. The display also supports DCI-P3 that has both an sRGB and Vivid profile, a contrast ratio of 1,200:1, and Dolby Vision.

As mentioned earlier, the new Microsoft Surface Studio 2+ is powered by an 11th generation Intel Core H-35 processor coupled with an Nvidia RTX 3060 laptop GPU that features 6GB of GDDR6 GPU memory. The software giant has not elaborated on the target audience for its new desktop machine. However, it does mention the usability of the machine for performing CAD work such as 3D rendering.

In terms of connectivity, the Surface Studio 2+ offers both Bluetooth 5.1 and Wi-Fi 6 options. As for the ports, it has three USB-C ports with support for Thunderbolt 4, which can add up to three 4K UHD 60Hz monitors to the base unit, two USB-A 3.1 ports, a 3.5mm headphone jack, and a gigabit Ethernet port. Other primary features on the device include a 1080p full-HD front-facing webcam, dual far-field microphones, and stereo 2.1 speakers with Dolby Atmos sound support.

What are your thoughts on the newly launched Microsoft Surface Studio 2+? Do let us know in the comments section below.