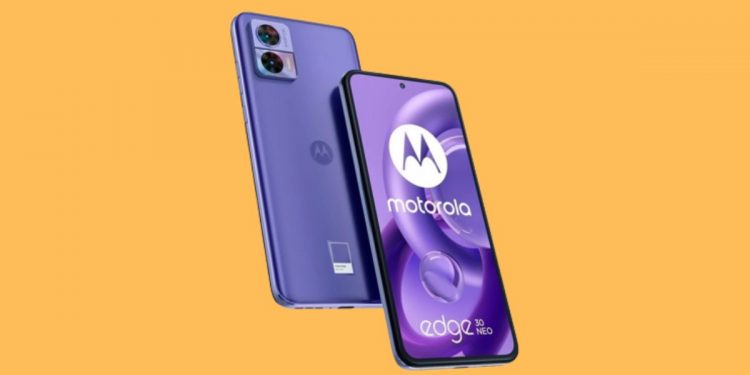 Motorola is preparing to launch a new smartphone under its Edge 30 series. Rumours have been rife that the upcoming Moto smartphone will be dubbed the Moto Edge 30 Neo. The colour variants of the device were recently leaked online. The smartphone is expected to arrive in Aqua Foam, Black Onyx, Ice Palace, and Very Peri colour options. Now, a new leak has popped up, revealing an image and the moniker of the smartphone. Let us take a look at the details.

Roland Quandt, a WinFuture journalist, shared an image of the alleged Moto Edge 30 Neo on Twitter. The image reveals a purple-looking variant of the device. It is reported to be the Very Peri colour option of the smartphone. The image also confirms that the upcoming phone will be named the Moto Edge 30 Neo.

As seen in the image above, the upcoming Moto Edge 30 Series smartphone will feature a dual-camera setup on the back. The main camera is said to come with a 64MP resolution and OIS (Optical Image Stabilisation) support. On the front, there is a single camera for selfies. However, the resolution of the selfie snapper remains unknown. The volume rocker and power keys can be spotted on the right-hand side of the device.

Apart from this, the leak doesn’t reveal any other details about the smartphone. However, we can expect an OLED panel to house a fingerprint scanner on the upcoming Moto Edge 30 Neo. Going by the leaked image, the much needed 3.5mm audio jack seems to be missing on the device.

What are your thoughts on the upcoming Moto Edge 30 Neo smartphone? Do let us know in the comments section below.