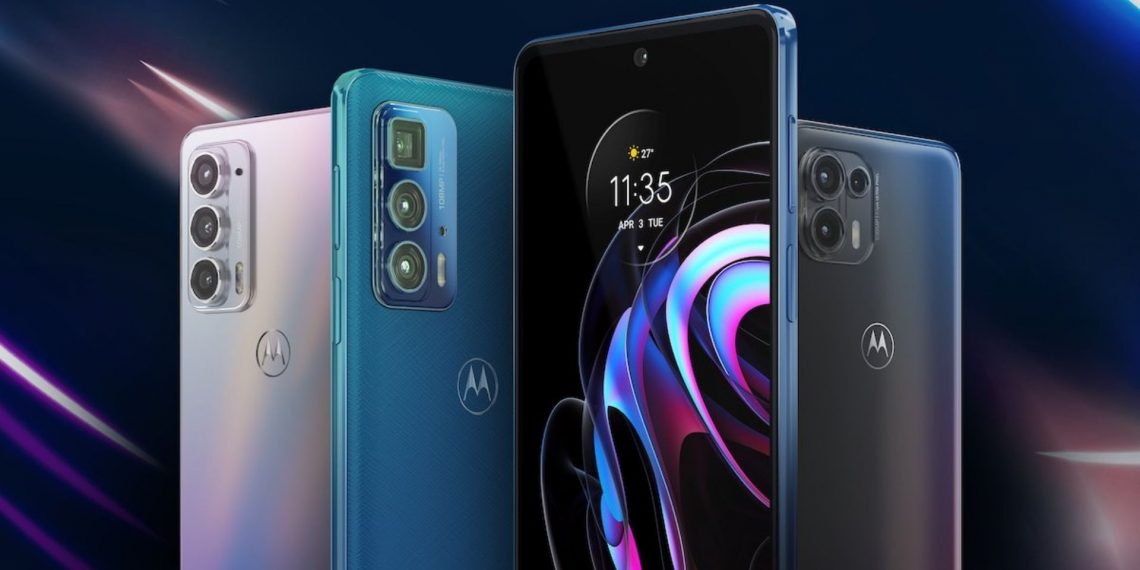 With the introduction of the new Moto Edge+ in 2022, Motorola made a comeback to the flagship phone market. A report from March of this year also indicated that Motorola has 19 smartphones planned for release this year. Evan Blass, for 91Mobiles, has now revealed information on five more handsets that Motorola is developing and may release in 2022 or 2023. According to reports, Motorola will introduce two low-midrange models, an aesthetics-focused phone, a high-mid range phone, and a smartphone with 5G capabilities. Motorola has not yet made any formal announcements about these devices.

The first is a lower mid-range device with 4G connectivity, code-named Devon, that is allegedly powered by Qualcomm’s Snapdragon 680 SoC and may be sold under the Moto G32 label. Devon will have an internal storage capacity of 128GB and a 6.49-inch FHD+ punch-hole display running at 120Hz. Motorola could opt to use a 50MP main camera, an 8MP secondary camera, and a 2MP depth sensor on the rear of the device. Devon includes a 16MP front-facing camera for taking selfies and making video calls.

Then there is Tundra, which is described as an Edge-branded phone that focuses on aesthetics and might make its debut in the Chinese market. Tundra has a 6.55-inch curved FHD+ POLED display with a 144Hz refresh rate, powered by a Snapdragon 888+ CPU. The device is said to provide a truly full-screen experience. Three RAM configurations for the Motorola Tundra will be available—6GB, 8GB, or 12GB of LPDDR5 RAM. This will be paired with either 128GB or 256GB of internal storage. There’s a 4400mAh battery and a triple camera setup on the rear that comprises a 50MP primary, a 13MP wide-angle, and a 2MP depth sensor. We may see a 32MP selfie camera on the front. Blass says that the device could be released sometime in the third quarter of this year.

Also Read
OnePlus Rolls Back Their Plans For A Unified OS, To Continue With OxygenOS

Next up are the entry-level and high-midrange models, Maui and Victoria respectively. The MediaTek Helio G37 will power Maui, while an unnamed MT6879 chipset will power Victoria. Maui has a 720p display, 3GB of RAM, and a basic 16MP-2MP-2MP + 5MP camera setup. On the other hand, Victoria has an FHD+ resolution, higher RAM options starting at 4GB and going all the way up to 6GB and 8GB. It also has a much bulkier camera set comprising a 108MP/48MP primary, based on the RAM amounts, an 8MP secondary that doubles as a wide-angle and depth-sensing sensor, a 2MP macro sensor, and a 16MP selfie camera. Both the phones are slated to release in the third quarter of this year.

Motorola is also gearing to produce a 5G version of the Devon, which should be available by the end of the year. However, a North American release for this product is most likely going to be in 2023. It has the same specs as its 4G brother, but switches the Snapdragon for a MediaTek processor that supports 5G, and replaces two of the cameras with one that has a 64MP main sensor instead of a 2MP module that only has depth-sensing capabilities.

Bronco and Canyon, two flagship-class smartphones from the Edge family, will be available in 2023. The Snapdragon 8 Gen 2 is expected to power Canyon’s 165Hz display, while the Snapdragon 8+ Gen 1 or 8 Gen 2 will be used in Bronco. Both phones have a 50-megapixel primary back camera, an FHD+ display, and either 8GB or 12GB of RAM. However, Canyon features a 60MP selfie camera, a 12MP telephoto module, and an additional 50MP sensor for wide-angle and macro photography. A 2MP depth sensor, 13MP wide/macro, and 16MP selfie choices are all that Bronco promises.

Juno, a folding phone described as the SM8475-powered successor to Maven and capable of 144Hz screen refresh rate, as well as the shape-shifting vertical rollable Felix, may become available in the next year or later.