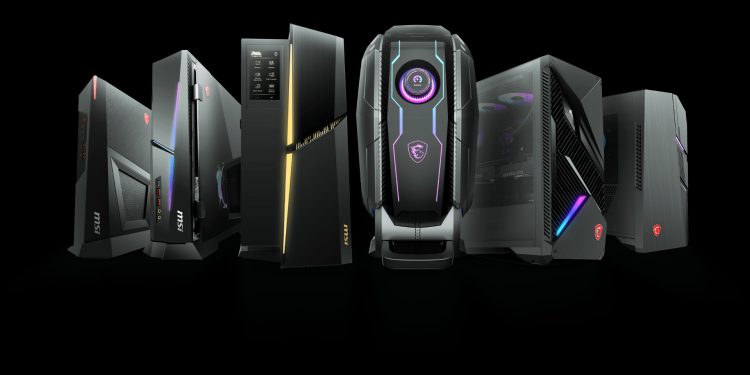 Along with discrete desktop GPUs, Intel also announced its 13th generation Core processors for desktops, and many of the company’s partner companies are jumping onboard the Raptor Lake bandwagon. MSI announced a range of desktop PCs featuring the latest Intel 13th gen processors along with Nvidia RTX 40 series GPUs which was announced last week.

The upgraded lineup of desktop PCs from MSI include the MSI MPG Trident 3, MPG Trident AS, MEG Aegis Ti5 and the classic Codex series. Apart from the new processors and graphic cards under the hood of these desktop PCs, there are also a few more upgrades MSI has made.

The Trident lineup is MSI’s flagship desktop offering, and features top of the line specs in a compact form factor. In the latest MEG Trident X2, MSI has some major design upgrades after a long time. For one, there is a 4.5-inch touchscreen on the front of the chassis, that allows users to quickly access system controls without navigating to the settings on the PC.

MSI has also redesigned the internals of the MEG Trident X2. There’s a 280mm all-in-one cooling system, along with the Silent Storm Cooling 3 design that keeps the major heat-generating components in the PC away from others, and cools them individually. The PC also comes with ATX 3.0 compliant power supply that ensures reliable power delivery to the RTX 40 series GPUs that it houses.

The MPG Infinite X2 looks a lot more conventional, albeit with ARGB lights all around. This too comes with the latest specifications including the latest Intel processor and Nvidia GPU. On top of that, there is a 240mm liquid cooling system combined with the same Silent Storm cooling design seen on the Trident X2.

This one is also easy to upgrade with a tempered glass side panel that can be removed with thumbscrews. The SSD slots in the PC are also screw-less and can be easily replaced or upgraded as needed. The PC also comes with a magnetic dust filter and an ATX 3.0 compliant power supply.

Aside from PCs powered by the latest Intel 13th gen processors, MSI also introduced a new gaming monitor to supplement the CPUs. The MEG 34DC is its first monitor to use Quantum Dot OLED technology, delivering better colour fidelity and viewing experience. This one has a 34-inch ultrawide display with 3440 x 1440 resolution and 1000 nits of peak brightness. It also supports HDR content and promises 98.3% coverage of DCI-P3 colour space with a Delta E of less than 2, indicating high accuracy.

Being a gaming monitor, this also features a 175 Hz refresh rate and 0.1 ms response time, which has become a typical OLED monitor feature. There’s support for HDMI 2.1 which allows users to make full use of the 175 Hz refresh rate through HDMI and DisplayPort. There’s also a built-in KVM, allowing use of multiple devices with a single keyboard and mouse. It can also charge a laptop with 65W power through a USB-C port.

A new Intel processor also means new motherboards, and the MSI Z790 boards pave the way for the next generation. This one’s particularly targeted at DIY enthusiasts with a few new components made to take on the latest Intel processors. The new motherboards are being introduced across its MEG, MPG and MAG lineups.

Below that, the MSI MPG Z790 motherboard focuses on RGB customisation with both onboard RGB and addressable RGB headers for other components that can light up. These remain on 2.5 Gbps ethernet but tops up with Wi-Fi 6E support.

There’s also the MSI MAD Z790 boards which are more mainstream but the company said it comes with an extended heatsink for improved performance. The company will offer both DDR5 and DDR4 variants of the motherboards.

For DIY PC builders, MSI also announced a range of new power supplies tuned for the latest hardware. This includes the MEG Ai 1000p and the MEG Ai 1300P, both featuring 80 Plus Platinum certification and up to 1300W of power supply to quench the thirst of the Nvidia RTX 40 series GPUs. These PSUs support PCIe 5.0 and ATX 3.0 with a 16-pin PCIe 5.0 connector capable of delivering 600W of power.

Furthermore, MSI announced a new PC case and a liquid cooler. The MSI PRospect 700R PC case and the CoreLiquid S360 AiO liquid cooler are meant to go together, with the PC case having space for a 360 mm radiator either on the front or at the top. So, users can mount the liquid cooler any way they like. The case and the cooler both feature built-in displays to show system information or even cool graphics.

MSI will be launching these PC components and desktop PCs in the coming few months. Pricing and availability are yet to be disclosed by the company.