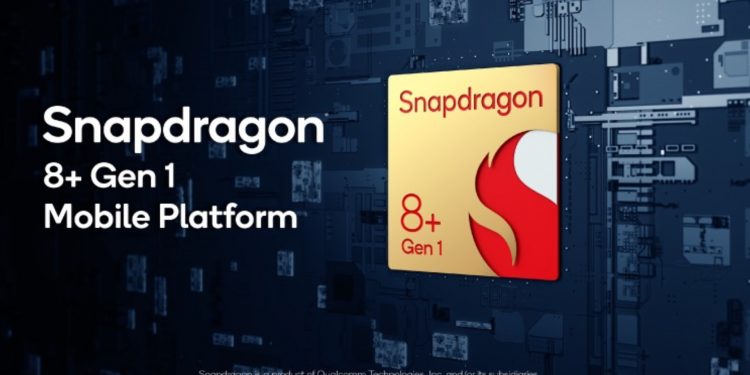 Qualcomm provided the Snapdragon prototype device built by Asus to select reviewers. “Designed By ROG Lab” branding on the device is a giveaway that the next ROG phone will be built around it. It sports an interesting translucent back panel with “Dare” branding. The horizontal camera island on the device is another ROG phone feature and is likely to be carried over to the production version. It also resembles the camera island design of the 2D renders that leaked earlier. The secondary screen will be slightly bigger in this iteration.

Talking about performance, as per the video the Snapdragon 8+ Gen 1 performs slightly better in synthetic benchmarks compared to the previous chipset, but importantly it consumes lesser battery while doing so. It is an indication that the upcoming ROG Phone 6 may come with improved performance, better thermals, and higher energy efficiency compared to the ROG Phone 5s, which is powered by the Snapdragon 888+ chipset.

iQOO has confirmed its next flagship smartphone, the iQOO 10 Pro, will pack the newly announced Snapdragon 8+ Gen 1 chip. The handset will get a BMW Motorsport design theme and will sit above the iQOO 9 Pro handset, which is just a few months old device.

iQOO is known for its gaming-centric smartphones, but its last few products have proved that it can produce good all-rounders. iQOO is expected to throw the kitchen sink at the iQOO 10 Pro. Expect a large 6.7-inch AMOLED display with LTPO and an improved 144Hz screen refresh rate. iQOO will pack it with a large vapour chamber to keep the thermals in check.

The iQOO 9 Pro comes with a comprehensive set of cameras, which are a 50MP primary camera with gimbal OIS, accompanied by a 50MP ultrawide shooter, and a 16MP telephoto lens with 2.5x optical zoom and OIS. The camera setup on the iQOO 10 Pro is expected to be largely similar to the iQOO 9 Pro. However, there could be differences in the software tuning.

An area where iQOO should improve is in the connectivity department. The iQOO 9 Pro comes with a USB 2.0 Type-C port, which is a crime on a gaming-centric device. Hope they equip the iQOO 10 Pro with a USB 3.2 Type-C port, which would make it compatible with capture cards like Elgato for efficient streaming. Another aspect where they could improve is by adding a larger battery. A 5000mAh battery pack instead of the 4,700mAh and combined with the more energy-efficient processor can provide some additional juice.

The Edge 30 Ultra could be the first smartphone to use a 200MP primary camera. It will be accompanied by a 50MP ultrawide camera and a 12MP 2x telephoto camera. For selfie aficionados, there’s a 60MP snapper at the front.

The smartphone is expected to be powered by a 4,500mAh battery and 125W fast charging support. It will run Android 12-based My UX out of the box.

The OnePlus 10 Ultra will slot above the OnePlus 10 Pro and will be powered by the Snapdragon 8+ Gen 1 chipset. Additionally, it might get OPPO’s MariSilicon chip for enhanced image processing.

The display is expected to be similar to the OnePlus 10 Pro, which is a 6.7-inch LTPO panel 10-bit panel with a 120Hz refresh rate and 1,200 nits of peak brightness. The OnePlus 10 Ultra might come with an improved set of cameras, featuring a 5x telephoto camera and Hasselblad tuning. It will also come with 150W fast charging support.

The original Realme GT Master Explorer Edition was powered by the Snapdragon 870 SoC (System on Chip) and never made it out of China. Now, Realme has confirmed that it is working on its successor, the Realme GT 2 Master Explorer Edition with the latest Snapdragon 8+ Gen 1 processor. Unlike its predecessor, this new smartphone is likely to make it in the global markets.

Realme’s flagship smartphone, the Realme GT 2 Pro, powered by last year’s Snapdragon 8 Gen 1 processor just went on sale in April 2022. It would be safe to assume that the upcoming Realme GT 2 Master Explorer Edition would be based on the GT 2 Pro. You can expect it to sport a flat or curved 6.7-inch QHD+ AMOLED display with a 120Hz adaptive refresh rate, and up to 1,400 nits brightness. It will be equipped with up to 12GB of RAM paired with up to 12GB of RAM and up to 256GB of internal memory.

In terms of camera, it could come with a 50MP primary sensor, a 50MP ultra-wide shooter, and a 2MP macro sensor.  The smartphone could be powered by a 5,000mAh battery coupled with Realme’s 150W UltraDart charging technology. It will come with a paperback or a briefcase design as seen or other Realme Master edition handsets.

The Samsung Galaxy Z Flip 4 could bring a major upgrade over the Galaxy Z Flip 3 in terms of battery life. The combination of a more power-efficient Snapdragon 8+ Gen 1 chipset and the bigger 3,700mAh battery could mean that it can finally last an entire day on a single charge. It also features 25W fast wired charging.

It will run Android 12 out of the box and get four major Android OS updates. There are no major differences in the design compared to the Galaxy Z Flip 3, though.

It is still expected to feature a 6.7-inch foldable OLED display with a 120Hz refresh rate and a 2-inch Super AMOLED cover display. It could feature a 50MP primary camera, a 12MP ultrawide camera, stereo speakers, and an IPX8 water resistance rating.

The Samsung Galaxy Z Fold 4 is reportedly thinner and lighter than the Galaxy Z Fold 3. It also has slightly shorter and wider displays for better usability. It will be compatible with the S Pen, but it won’t have a built-in silo to store the stylus. It will feature the Snapdragon 8+ Gen 1 processor, 12GB RAM, and 256GB/512GB internal storage.

At the rear, it is rumoured to feature a 50MP primary camera, a 12MP telephoto camera with 3x optical zoom, and a 12MP ultrawide camera. On the front, it uses a 10MP selfie camera. It will have stereo speakers, a side-mounted fingerprint reader, an IPX8 rating for water resistance, 25W fast charging, 15W fast wireless charging, and 4.5W reverse wireless charging.

The Xiaomi 12S with codename ‘Diting’ is expected to be a successor of the Xiaomi 12. It may retain most of the specifications as the device is just a few months old. It may sport a 6.28-inch Full HD+ AMOLED display with a 120Hz refresh rate and 1,100 nits peak brightness.

In terms of camera, it may come with a 50MP main camera, a 13MP ultrawide camera, and a 5MP tele-macro camera. The 4,500mAh battery is expected to remain unchanged and will get fast charging, wireless charging, and reverse charging technologies.

The Xiaomi 12S Pro with the codename ‘Unicorn’ will be the successor to the Xiaomi 12 Pro. Going by the Xiaomi 12 Pro’s specifications, it may sport a 6.73-inch Full HD+ AMOLED screen with a 120Hz refresh rate and a 480Hz touch sampling rate. Of course, it features the Snapdragon 8+ Gen 1 chipset.

For photography, the Xiaomi 12S Pro could boast a 50MP+50MP+50MP triple-camera setup with OIS and 8K video capabilities. It is expected to pack in a 4,600mAh battery under its hood coupled with 120W fast charging and 50W wireless fast charging.

In terms of optics, it gets a triple camera setup comprising of a 108MP primary sensor, an 8MP ultrawide shooter, and a 2MP macro lens. The device is powered by a 5,000mAh battery coupled with a 120W fast charging support.

The Xiaomi MIX Fold 2 is referred to as ‘Zizhan’ in the source code. Xiaomi’s MIX series has always brought innovative designs and technology. The MIX Fold 2 will not be an exception, as it is said to bring the world’s first folding mechanism with a 360-degree rotation. Meaning, that the MIX Fold 2 will get an outward folding screen.

The device is expected to use the Qualcomm Snapdragon 8+ Gen 1 processor. It could launch in June 2022 and may be exclusive to the Chinese market.

What Is The Need For A New Chipset?

Qualcomm launched the Snapdragon 8 Gen 1 chipset in November 2021 and is just a few months old. The chipset is a monster on the paper but fails to translate all that horsepower into real-world performance. The chipset is unable to sustain its peak performance for longer durations due to overheating issues.

Smartphone brands tried to tame this fire-breathing dragon by employing various cooling technologies. Despite that, it couldn’t live up to the expectations and scored low even in battery efficiency.

The last good performing flagship chipset from Qualcomm was the Snapdragon 870. Since then, the company moved its fabrication process from TSMC to Samsung, and probably that was the major reason for its downfall. The Snapdragon 888, the Snapdragon 888+, and the Snapdragon 8 Gen 1 were all built on Samsung’s process and suffered a common problem, overheating and lower power efficiency.

With this move, Qualcomm aims to fend off the challenge presented by MediaTek’s Dimensity 9000 and Dimensity 8100, which have been performing better in real-life scenarios, as revealed in our Realme GT Neo 3 review.