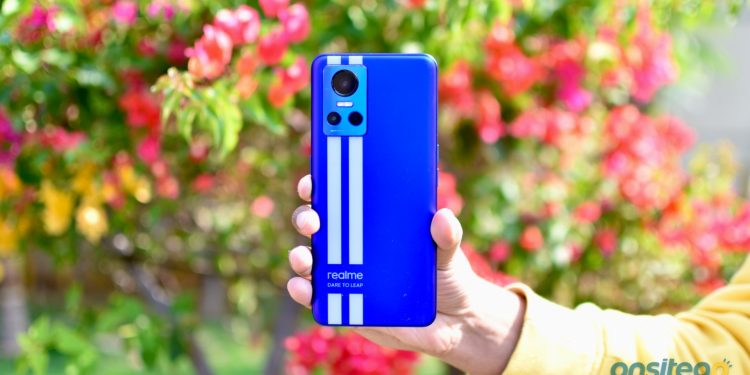 Realme launched so many phones over the past few months that things are now truly getting out of hand. We recently reviewed the Realme 9, Realme 9 5G SE, and the Realme 9 Pro+. Last week, the company launched the Realme GT Neo 3 in India.

The high-end phone brings a bold design, the new Dimensity 8100 processor, and whopping 150W fast charging. Are those three factors enough to win against the competitors? Let us find out in our Realme GT Neo 3 review.

Onsitego got the Realme GT Neo 3 one week before the launch, and I’ve been using it as my primary device since then. I used the phone on Airtel’s network with LTE turned on. Since there are no 5G networks in India yet, the experience solely relies on the 4G LTE performance of the phone. Here’s what I think of the Realme GT Neo 3.

Realme generally goes with bold designs for its phones, and the Realme GT Neo 3 is no different. It has glass on the front and the rear, and its frame is made using plastic. This build is similar to most other affordable high-end phones like the OnePlus 10R and the Xiaomi Mi 11X Pro 5G. The phone feels solidly put together, and there are no creaks or flex.

There’s an almost bezel-less display at the front. The bezel on the bottom is thicker than the rest of the sides, but that’s common in this price segment. So we will give it a pass. There is an under-display fingerprint reader. At the rear, there is a camera bump that causes the phone to slightly rock when you are using it on a flat surface.

There is no IP rating, that’s what separates affordable high-end phones from true-blue flagships these days. But water splashes or raindrops shouldn’t pose a problem for the phone as most mid-range and high-end phones have basic liquid protection.

The 6.7-inch Full HD+ AMOLED display on the Realme GT Neo 3 is bright, sharp, colourful, and fluid. It has a 120Hz refresh rate, great for general UI browsing, web browsing, and gaming. It has HDR10+ certification, too, so watching videos on Disney+ Hotstar, Netflix, Prime Video, and YouTube should be a great experience. The phone also offers a good audio experience, thanks to stereo speakers.

Out of the box, the phone uses the Vivid display mode, which adds a pinch of additional contrast and has slightly bluish whites. Most users would like this mode, but the Realme GT Neo 3’s display is more colour accurate in the Natural mode. On top of this, you can adjust the colour temperature using a slider in display settings.

The phone comes with a dedicated display processor that interpolates frames to offer higher frame rates. The optical fingerprint reader is placed a little lower than the perfect position. It is fast and reliable. It can also act as a heart rate monitor, and it performs as well as any smartwatch.

The 50MP camera captures really neat shots, thanks to the big sensor size (and native pixel size), wide aperture, and OIS. Images are clean and noise-free. The dynamic range is wide and the colours are true to life.

It captures good images in the Portrait mode. The subject separation is pretty accurate and the background blur effect is applied gradually. Things nearer to the camera are blurred slightly, while things far away are blurred more.

There’s no dedicated telephoto camera on the Realme GT Neo 3. So, the phone crops in from the main camera sensor for 2x hybrid zoom. Such zoomed-in shots are decent, especially for posting on social media or in messaging apps.

The front-facing camera is below par as well. The 16MP camera captures images with decent details but the colours appear washed out and the dynamic range is limited. The skin tones appear unnatural and the highlights are generally blown out. For example, the sky appears white even though it is light blue in colour.

Only the primary camera on the Realme GT Neo 3 can record 4K 60fps videos. The other cameras are limited to just 1080p 30fps. One would at least expect the ancillary cameras to support up to 4K 30fps video recording, but that’s not the case with the Realme GT Neo 3. So long as you use the primary camera to record videos, the result is pleasing (but not commendable), but as soon as you switch to the other cameras, the results are below par for the phone at this price.

Videos from the primary rear camera have great details and a wide dynamic range. Autofocus is fast and reliable. However, there’s either no EIS or the stabilisation is not very effective. There’s some judder while panning. These videos have stereo audio at 156kbps (AAC codec).

1080p videos recorded using the front-facing camera have decent details but the dynamic range is limited and there doesn’t seem to be any form of stabilisation. The audio is recorded in stereo at 256kbps (AAC codec).

Only Samsung, OPPO, and Vivo appear to be offering sub-₹40,000 phones with 4K video recording using the front-facing camera. All other brands are offering 4K videos only on their flagship/premium high-end phones.

The Realme GT Neo 3 is the first phone with the MediaTek Dimensity 8100 chipset that we’ve reviewed. This processor competes with the Qualcomm Snapdragon 888/888+. It is made using TSMC’s 5nm process and uses four Cortex-A78 CPU cores, four Cortex-A55 CPU cores, and the Mali-G610 MC6 GPU. MediaTek chipsets have gotten really good over the past couple of years.

I was left impressed with the Dimensity 8100’s performance. It’s fast, quite stable, and power-efficient. The phone performed admirably in all testing conditions, even during hot Indian summers with the temperature soaring to 45 degrees celsius. The UI rendering, animations, and transitions were always smooth and fluid.

I played BGMI and Call Of Duty Mobile for a few hours. The gaming experience was great, thanks to stable and smooth frame rates. The phone got a bit warm, but it was nothing uncomfortable.

While playing Call Of Duty Mobile, the phone consistently offered 57-60FPS frame rates. The GT Mode lets the processor run free of any performance throttling at the expense of higher temperatures. This is useful while gaming when you want the phone to dole out all the frames that it can process.

The Realme GT Neo 3 runs Android 12-based Realme UI 3.0. It is among the good Android skins out there, but it’s still far away from the polish that Samsung’s One UI offers. The built-in apps are feature-rich. You can hide apps and files, lock them, or check which apps have been using data, camera, or microphone in the background.

There are a lot of UI customisation features, such as the option to customise app icon shape, quick setting toggles, wallpaper, ringtones, theme, UI accent colours, fone size, display size, edge lighting, home screen animations, and even the fingerprint reader animation. There are a few areas where Realme can improve upon. For example, you can change the app icon shape to circle, square, or squircle, but you can’t select any shape for app folders.

The phone comes with a lot of pre-installed bloatware apps. You can uninstall most of them except for Hot Apps & Games and FinShell Pay. The UI is generally fast and fluid, especially on the phone’s 120Hz display mode.

The 4,500mAh battery inside the 150W variant of the Realme GT Neo 3 easily lasts a day even with moderate to heavy use. My usage involved two email accounts on sync, regular use of instant messaging and social media apps, a couple of hours of video streaming, and a bit of gaming and music streaming. I usually got over 5 hours of screen-on time.

The Realme GT Neo 3’s 150W USB Type-C charger is the one charger to rule them all. Apart from Realme’s Dart, SuperDart, and UltraDart charging, it also supports Quick Charge and USB PD 3.0 PPS fast charging protocols. It successfully fast-charged my Galaxy S22+ and the Apple MacBook Pro 14-inch. It is slightly bigger and heavier than the regular 30W Dart Charger.

The Realme GT Neo 3 gets our recommendation if you’re looking for a sub-₹45,000 Android phone. It looks bold and is solidly put together. It has a sublime screen, excellent sustained performance, feature-rich software, good battery life, and unbelievably fast charging speeds. It lacks an IP rating and its ancillary cameras are a letdown.

Even if you get the 128GB version of the phone, you would be more than satisfied with its battery life and charging speeds. If you still don’t prefer a MediaTek chipset, you can go with the Realme GT 2, which has a similar performing Snapdragon 888 chipset but you would miss out on 80W/150W fast charging and 4K 60fps video recording.

If you want a better camera but can work with slightly iffy software, you can have a look at last year’s Vivo X60. If you want a phone with an IP67/IP68 rating for dust and water resistance, you would have to look at Samsung’s Galaxy A73, Galaxy S20 FE 5G, or the Galaxy S21 FE.

The Realme GT Neo 3 gets our recommendation over the OnePlus 10R, Motorola Edge 20 Pro, Realme GT 2, and the Xiaomi 11T Pro. The phone has a bold design, a sublime screen, excellent sustained performance, feature-rich software, good battery life, and unbelievably fast charging speeds. It lacks an IP rating and its ancillary cameras are a letdown, though.