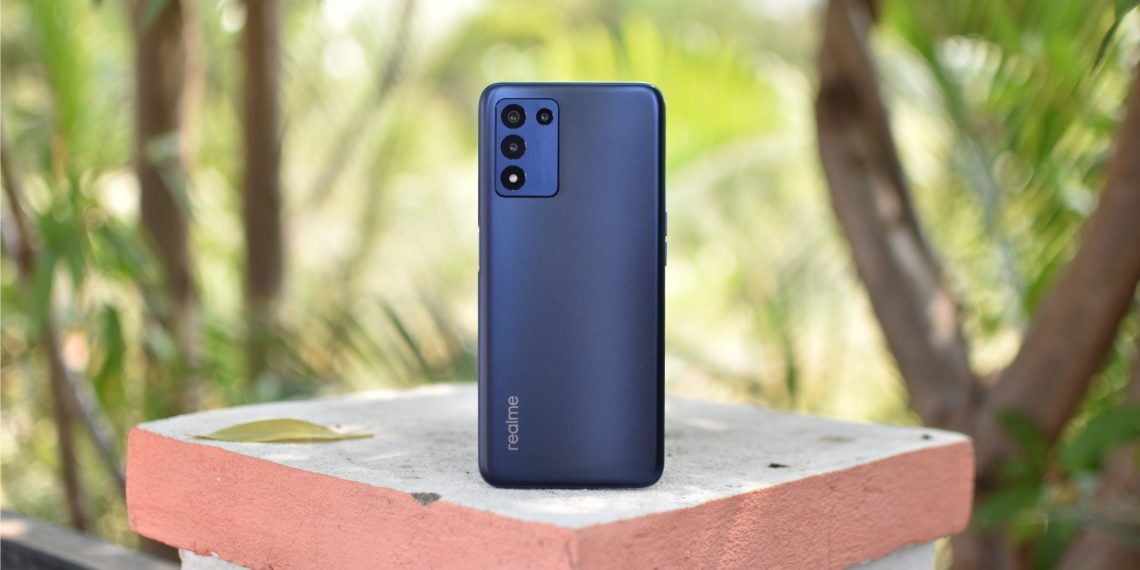 If you’re an avid mobile gamer with a budget of no more than ₹20,000, Realme’s recent launch—Realme 9 5G SE—might interest you. It features a high-refresh-rate display, the powerful Snapdragon 778G processor, 5G compatibility, a headphone jack, and a big battery — all ingredients for a great gaming smartphone, and that too for just ₹19,999.

But we can’t just go by on-paper specifications, can we? So, let’s find out how the phone performs in real life and if its performance is limited to just gaming.

Note: We got the Realme 9 5G SE review unit from Realme as a loaner for a few weeks. We got the phone’s Azure Glow colour variant with 8GB RAM and 128GB internal storage. We’ve used the phone for two weeks on Airtel’s LTE network before writing the review. While indoors, the phone was hooked on to Reliance JioFiber’s network on the 5GHz spectrum.

Right off the bat, the Realme 9 5G SE’s design won’t turn any heads, especially compared to something like the Realme 9 5G and the Realme 9 Pro+ 5G (Review). The 6.6-inch display at the front has a punch-hole towards the top-left corner of the screen. The bezels on the display’s top, right, and left sides are thin, but the bottom bezel is slightly thick.

The rear of the phone has a matte finish. Our Azure Glow colour variant doesn’t look particularly attractive. While it might appear pretty good in press images, the phone looks quite dull in real life. There’s no differentiating element or a head-turning finish. But that doesn’t mean it isn’t good to hold. It’s pretty comfortable to hold despite its big battery.

There’s a fingerprint reader embedded into the phone’s flat power button. The headphone jack and the USB Type-C port are at the bottom. Overall, there’s nothing wrong with the phone’s design, but it doesn’t look as attractive as some other phones in the segment.

Unlike some of the best-selling phones in the category, the 6.6-inch display on the Realme 9 5G SE uses an IPS LCD panel. It has Full HD+ resolution, 450 nits typical brightness (600 nits in High Brightness Mode), and a 144Hz refresh rate.

Yes, the phone’s refresh rate is higher than most other phones in the price segment, but most people won’t notice any difference compared to many other phones with a 120Hz display. What most people will notice, though, is that the colours, contrast ratio, and viewing angles aren’t as good as an OLED panel.

We think that Realme should’ve used an OLED panel with a 90Hz or 120Hz refresh rate rather than using an LCD screen with a 144Hz refresh rate. The OLED screen’s deep blacks and popping colours would’ve had a better effect than a slightly higher refresh rate of the Realme 9 5G SE’s LCD display.

Most games were locked to the 60Hz refresh rate, but BGMI did fully utilise the Realme 9 5G SE’s 144Hz refresh rate. It was a buttery smooth experience. However, as I mentioned earlier, an OLED display would’ve offered a better overall experience while gaming as well as consuming multimedia content as OLED panels have a better response time and deeper colours.

The single loudspeaker of the Realme 9 5G SE is nothing to write home about. The volume is quite average. There’s no low-end to speak off and the highs aren’t sparkly. A stereo speaker setup would’ve elevated the gaming as well as the general multimedia experience. The phone has the trusty old 3.5mm headphone jack that you can rely on for competitive gaming and to listen to music with your choice of earphones. For gamers, there’s nothing better than a dedicated headphone jack as even the best wireless earphones have latency issues.

This phone is not for you if you are expecting to click some good images and videos. It has a 48MP primary camera, a 2MP macro camera, and a 2MP monochrome sensor at the rear. On the front, the phone has a 16MP camera for capturing images and videos and for video calling. While the phone’s processor supports 4K 60fps video recording, the Realme 9 5G SE is limited to 4K 30fps recording.

Images shot using the primary camera are quite ordinary. The colours look faded and the images are slightly overexposed. Moreover, all the images have a red/orange tint to them. Details are on the lower side, too, and there’s a bit of noise. The skin tone is always two shades lighter than reality. At least there are no issues with autofocus.

Since there’s no OIS or a bigger sensor, images captured in low-light conditions have a lot of noise and the details are smeared. There’s also a green tint across the images. Activating the Night Mode brings out more details and brings highlights under control. However, the image quality is still not up to par.

In some scenarios, the whole image turns purple when the Night Mode is used. We double-checked by capturing the scene twice, but the issue persisted. This is most likely a bug and needs to be fixed by Realme at the earliest.

Images from the 2MP macro camera are unusable. They are often overexposed and there’s not enough detail in them. It’s better to use the 48MP camera from a distance and then crop a part of the image. That will get you greater details and better colours.

Thanks to the Snapdragon 778G processor, the Realme 9 5G SE is one of the finest performers in its price segment. The device performs admirably in every scenario. I did not notice any stutters or slowdowns. Animations and transitions were buttery smooth. Be it multitasking, using the camera, or playing graphically intensive games, the phone performed without breaking a sweat.

Games ran at consistent frame rates. Alto’s Odyssey, BGMI, and Call Of Duty ran at 60fps with high graphics settings (when available). In some scenarios, BGMI saw a few dropped frames. Despite the 144Hz refresh rate, Realme hasn’t enabled high-refresh-rate gaming on any of its phones, including the Realme 9 5G SE. Still, a fast processor makes sure that you don’t face frame drops even during long gaming sessions. After an hour of gaming, the phone’s camera module and nearby area reached around 45 degrees celsius.

Since Android OEMs count the number of updates based on the out-of-the-box software, Realme might only release two Android updates (up to Android 13) to the Realme 9 5G SE. That’s quite unfair, especially given the powerful hardware. The phone deserves better.

Coming back to the software features and quality, Realme UI 2.0 is quite feature-rich and customisable. It has all the features that one would expect from a mid-range Android smartphone. However, it comes with a lot of unwanted apps and services that push notifications and advertisements. The good thing is, you can uninstall almost all unnecessary apps.

Powered by a 5,000mAh battery, the Realme 9 5G SE easily lasts a complete day even with heavy usage. That’s what we’ve come to expect from most mid-range smartphones these days.

Unlike some other phones (including Realme’s own), the Realme 9 5G SE focuses more on performance rather than charging speeds. At 30W, its charging speed is still fast enough for most people. It takes around an hour for 0-100% charge. A 30-minute charge takes the phone from flat to around 50%. While these might seem slow compared to competing phones that have 66W or 67W charging, it’s still perfectly fine for most people.

So, who’s the Realme 9 5G SE made for? If you’re an avid mobile gamer, you’ll probably be well-served by the Realme 9 5G SE. It has a high-refresh-rate display, an extremely powerful and stable processor, a headphone jack, and long battery life. It is future-proof in terms of connectivity as well, featuring a 5G modem, which means you can play high-quality games on the go once India gets 5G networks later this year.

The phone focuses too much on performance and underplays the importance of cameras. Its cameras are underwhelming. The phone also lacks features like stereo speakers and an IP rating, some things that are increasingly becoming common in the sub-₹20,000 price segment. It should’ve also come running Android 12 out of the box. If you’re not going to keep the phone for more than two years, this shouldn’t be a matter of huge concern for you.

If Realme can improve the camera of its phone, it will suit more people than just gamers. But right now, we would recommend the phone only to mobile gamers or performance enthusiasts who don’t use the camera a lot.

For those who value the camera and the display, there are options like the Xiaomi Redmi Note 10 Pro, Redmi Note 11 Pro Max, and the Samsung Galaxy A23. If you can spend a little more, the iQOO Z5 and the Realme GT Master Edition.

If you’re an avid mobile gamer, you’ll probably be well-served by the Realme 9 5G SE. It has a high-refresh-rate display, an extremely powerful and stable processor, a headphone jack, and long battery life. The phone focuses too much on performance and underplays the importance of cameras, though. Its cameras are underwhelming. and it lacks features like stereo speakers and an IP rating, some things that are increasingly becoming common in the sub-₹20,000 price segment.