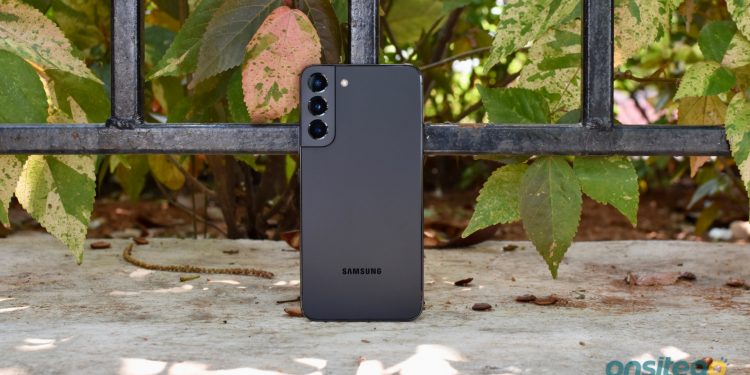 Samsung has been the leader of the high-end smartphone market for well over a decade. Its Galaxy S series has been iconic, offering the best display, camera quality, and feature set in the segment. A month ago, Samsung launched the Galaxy S22 series, which consists of the Galaxy S22, Galaxy S22+, and the Galaxy S22 Ultra.

These new phones are claimed to feature a better display, faster processor, improved cameras, and faster charging. We had a chance to review the Galaxy S22+ for a few weeks now, and here’s our Galaxy S22+ review.

It has a completely flat front and rear design, and the metal sides are slightly curved. The phone feels good in the hand. The power and volume buttons are easily accessible and clicky. There’s a USB Type-C port at the bottom along with one of the two loudspeakers, a microphone, and a dual-nano SIM card slot. At the top, there’s a secondary microphone.

The phone is slim and relatively lightweight but well-built at the same time. Samsung claims that the Galaxy S22+ features Armor Aluminium which is 10% stronger than regular aluminium used in other Samsung phones. The device is protected by Gorilla Glass Victus+ on the front and the rear. It is also IP68 certified for dust and water resistance.

The 6.6-inch 120Hz Super AMOLED display is the absolute best. No other rival phone has a display that’s as bright, colour-accurate, and contrasty as this one. It can go as bright as 1,750 nits under direct sunlight. However, that is only for a small part of the screen. It still hits an insanely high 1,200 nits with the Extra Brightness mode turned on.

Even other phones go insanely bright under such situations, but their colour accuracy goes for a toss. Samsung, though, has worked on a new technology called Vision Booster that helps the phone in maintaining decent colour accuracy even in the high brightness mode. I did notice better colours under direct sunlight compared to the Galaxy S21+ and the Galaxy S21 Ultra.

Whenever the finger touches the screen, it switches to 120Hz, and a few seconds after the finger is removed, it drops to 60Hz, 30Hz, 24Hz, or 10Hz, depending on the app and the frame rate. For example, it switches to 60Hz Netflix and YouTube and 24Hz on the home screen or any static screen. There’s no limitation on high-refresh-rate gaming, unlike some Realme phones. Supported games run at 120Hz and there’s no limitation.

The display is certified to play HDR10+ and apps like Disney+, Netflix, Prime Video, and YouTube can stream HDR videos. And yes, the phone has Widevine L1 certification, which means you get stream Full HD resolution.

To add to that excellent visual experience, the Galaxy S22+ also features stereo speakers that are loud and clear with even a hint of bass. Unfortunately, the phone doesn’t feature a 3.5mm headphone jack, so you’ll either have to use wireless earphones or a USB Type-C DAC/dongle.

The Galaxy S22 and the Galaxy S22+ have three cameras on the rear: one 50MP primary camera with dual-pixel autofocus and OIS, one 12MP ultrawide camera with a fixed-focus lens, and a 10MP telephoto camera (with 3x optical zoom and OIS). On the front, both phones have a 10MP selfie camera with autofocus.

All the cameras on these two phones can record up to 4K 60fps videos. The primary rear-facing camera can also record 8K 24fps videos.

The primary camera uses a bigger sensor (1/1.56-inch) than the 12MP sensor found in the Galaxy S21+ (1/1.76-inch). Due to its bigger sensor size and higher resolution, the Galaxy S22+’s main camera captures images with higher details.

Images captured using the main camera are clear, sharp, and full of details. They have a very wide dynamic range. However, there are a few highlights that appear as blown. That issue isn’t present in the Galaxy S21+ that I tested side by side. Colour tones are slightly warmer than in reality.

In low-light conditions, the primary camera works really well. Most images have low noise, a wide dynamic range, and colours appear closer to reality. The Night mode in the camera app further improves images by clicking an image for three seconds or more, depending on ambient lighting.

Human subjects are defined well and there are a lot of details on the faces. Colour tones look natural.

Portrait images have exceptional subject detection and a nice amount of background blur. The algorithms are so accurate that the phone’s camera can recognise even individual strands of hair. However, the background blur isn’t applied gradually as the Galaxy S21 does. The phone can shoot portrait images from the front-facing camera, the primary rear camera, and the 3x telephoto camera.

With the Galaxy S22 series, Samsung introduced a feature that lets users shoot portrait images of pets as well. Earlier, this mode was only available for human subjects.

The ultrawide camera captures great images. Plenty of details (for an ultrawide), colour consistency with the main camera, and a wide dynamic range. Even in low-light conditions, the Galaxy S22+’s camera performs well. There is higher noise and lower details compared to the main camera, but that’s to be expected. Using the Night mode removes a lot of noise, resolves more details, and increases details in highlights and shadows.

The 10MP telephoto camera saves images in 12MP resolution. The phone does some upsampling so that all photos captured using the rear cameras have the same resolution. It has a decent amount of details, similar colour science to the other two rear cameras, and a similar dynamic range. In low-light conditions, the camera doesn’t offer the same image quality as the main camera due to a narrow aperture and a smaller sensor.

Also Read
Samsung Galaxy S22 Launch Date Is February 9: Here's What We Know About The Smartphone

In comparison, images from the Galaxy S21+’s telephoto camera don’t have as many details and showcase purple fringing in a lot of areas. Last year’s high-end Samsung phone also look washed out. There is more noise at every zoom level compared to the Galaxy S22+. You can only go as high as 5x zoom for acceptable shots for posting on social media networks.

4K videos recorded using the Galaxy S22+ have good colours, high details, and smooth frame rate even while panning. The phone can record 4K videos with a real-time background blur effect. Yes, it’s not perfect but it is good enough to be posted on social media networks. 8K 24fps videos are full of details but are not as stabilised as 4K videos. The dynamic range is a little narrower too.

The 10MP selfie camera is absolutely terrific. It’s probably the best selfie camera that you can find on any smartphone. It takes detailed selfies with good colour reproduction and a wide dynamic range. It can also record smooth and detailed 4K 60fps videos.

Most people will be satisfied with the Galaxy S22+’s camera performance in almost all scenarios and conditions.

The phone uses among the fastest smartphone processors available in the Android segment right now: Snapdragon 8 Gen 1. Paired with 8GB RAM and 128GB storage, the phone feels fast and responsive most of the time. However, there are some scenarios (opening the camera or going to the home screen) where the phone doesn’t feel as fluid as the hardware is capable of. Last year’s Galaxy S21 feels more fluid than the Galaxy S22+. Maybe Samsung has optimised the software enough yet. Hopefully, the company fills those gaps soon with future software updates.

Gaming performance is very good. Playing high-refresh-rate games is possible, and Samsung hasn’t locked any games from using its 120Hz display to the fullest. I played a lot of Call Of Duty. Just to test how the phone behaves in games that feature high-refresh-rate gaming, I also tried out Alto’s Adventure, BGMI, and Rayman Adventures.

Much has been debated about Samsung’s GOS (Game Optimisation Service), and I tried gaming after disabling it. If you haven’t heard about it earlier, GOS is Samsung’s system-wide service that limits the peak performance capability of the processor slightly to stop it from throttling under a sustained workload. I personally think this is actually good as it results in stable performance.

When GOS is turned off, the phone offers a relatively higher frame rate for a few minutes. But then it drops hard and you start to notice lower performance. If you want stable performance, it’s better to keep GOS turned on.

The phone features 5G, LTE, dual-SIM card slot, GPS, Wi-Fi 6E, Bluetooth 5.2, NFC, and a USB Type-C port. Its network performance was excellent on LTE networks. Since there is no 5G network in India yet, we couldn’t test the phone’s 5G performance, call quality, or battery life.

The Galaxy S22+ was launched with Android 12-based One UI 4.1. It is, hands down, the best version of Android I’ve used. The UI design is fun and sophisticated, depending on how you set it up. There is a truckload of features in One UI 4.1. You should go through our One UI 4.0 and One UI 4.1 related articles to know all about those features.

In short, One UI 4.1 is feature-rich, good-looking, fluid, and secure. Apart from a few stutters, I did not find many shortcomings in Samsung’s software.

The 4,500mAh battery inside the phone usually lasts an entire day with moderate to heavy usage.

My usage involved half a dozen social media apps, constant messaging for personal and work use, three synced email accounts, listening to music for an hour or so, some camera usage, and GPS navigation.

I usually got around five hours of screen-on time over a period of 20-24 hours. It’s good enough for most people, but power users might need to charge the Galaxy S22+ once more during the evening or late evening.

Even though the 45W number might look like a huge upgrade from last year’s 25W fast charging, it isn’t. It takes almost just as long to charge the phone fully. We are looking at an hour for a full charge, which is similar to Galaxy S21+’s 25W fast charging despite it featuring a bigger, 4,800mAh battery.

With 15W fast wireless charging, the Galaxy S22+ easily takes over a couple of hours for a full charge.

The Galaxy S22+ is an excellent smartphone. Its display, cameras, software, and update support are second to none. Other neat quality-of-life features like stereo speakers, IP68 rating, wireless charging, and reverse wireless charging are present, too. However, its charging speed isn’t as fast as some of its rivals and the battery life falls a little short.

Then there’s its pricing. it is priced a lot higher than similarly-specced phones like the iQOO 9 Pro, OnePlus 10 Pro, and the upcoming Xiaomi 12 Pro. On top of that, it doesn’t come with the charger in the box. So the whole value proposition makes the phone look a little less attractive.

If you are happy with the Galaxy S22+’s charging speed and if you value software quality and long update support, you can go ahead and buy the phone. The Galaxy S22+ will keep you happy for years to come.