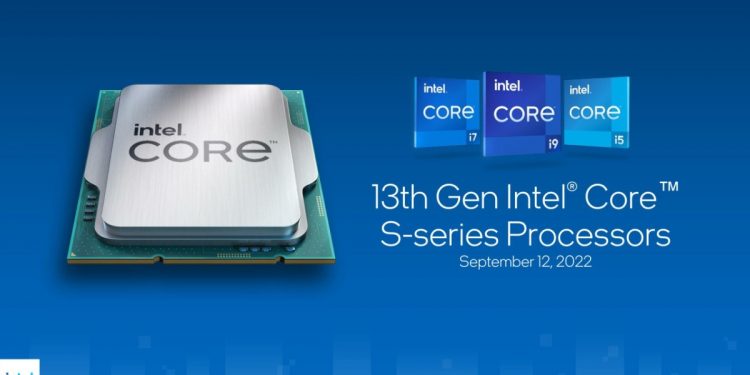 On October 20, 2022, an expanded 13th Gen Intel Core desktop family will be unveiled, with 22 CPUs and more than 125 partner system designs. As long as the manufacturer of your motherboard has released a BIOS update, these CPUs will continue to support both DDR4 and DDR5 memory on all current-generation 600-series motherboards.

The hybrid architecture that Intel debuted in its 12th-generation Alder Lake processors last year is used in Raptor Lake as well. Additionally, Intel’s performance hybrid design for this generation combines up to twice as many Efficient Cores (E-core) with the fastest Performance Cores (P-core) ever made to improve single-threaded and multi-threaded performance. In addition to having a roughly doubled L2 cache, the CPUs will now officially support DDR5-5600 RAM, up from the existing maximum of DDR5-4800.

The lineup’s headliner is the new Core i9-13900K which boasts 32 threads and 24 cores for gaming, streaming, and recording (8 P cores, 16 E cores). This might support high frame rates and unleash top games thanks to 5.8 GHz and 15% better single-thread performance.

The greatest improvements in multi-threaded performance can be seen in the i9-13900K, which performs 41% better than the i9-12900K thanks to the addition of a bigger cache, faster clock rates, and more E-cores. The standard wattage of these 13th-generation CPUs from Intel remains at 125W, while the Core i9-13900K may consume up to 253W of power under extreme conditions.

Intel also unveiled the new Intel 700 Series chipset, which makes use of cutting-edge technology to enhance performance and reliability, in addition to the 13th Generation Intel Core desktop CPUs. The chipset now has eight PCIe 8.0 lanes, increased USB 3.2 Gen 22 (20 Gbps) connections, 20 PCIe 4.0 lanes for SSDs and other devices, and DMI Gen 4.0. Additionally, Intel is delivering backward and forward compatibility, which will enable the usage of older Intel 600 chipsets with 13th-generation Intel Core CPUs.

The 13th Gen Intel Core desktop “K” CPUs with the Intel Z790 chipset will be available starting October 20. Additional details about the 13th generation Intel Core processor family will be released at a later date along with the pricing info for various regions.