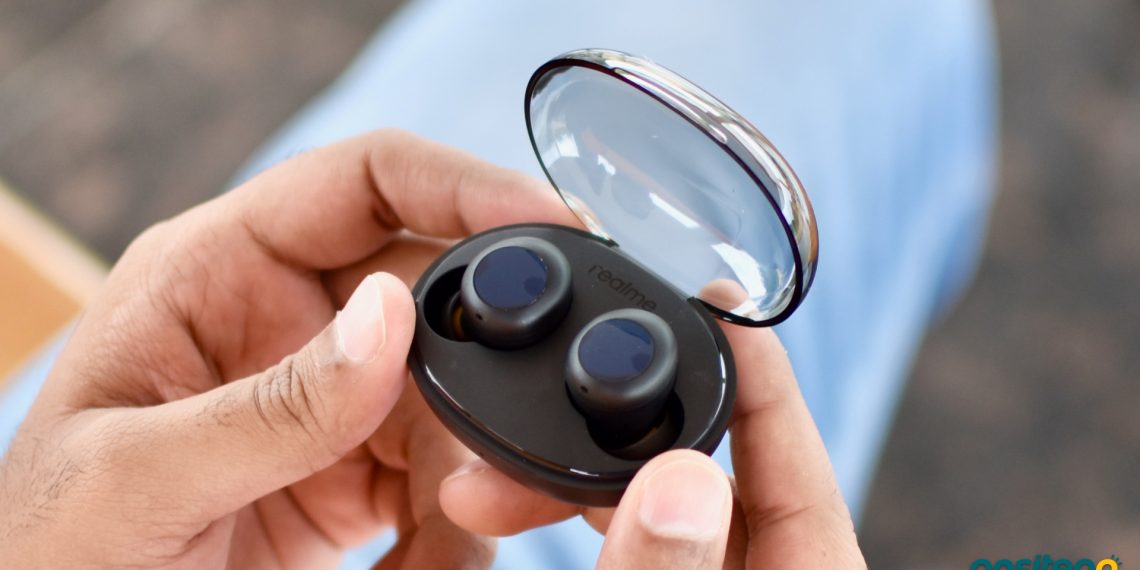 They are priced at ₹1,999 and are quite feature-rich for the price. But how do they sound, and how long do they last? Let us check out how they perform and whether they are worth buying over other wireless earphones in the same price segment.

There is nothing special about Realme Buds Q2s’s design. They have an oval-shaped plastic case with a thin transparent lid. The lid feels too light (not in a good way) and can get scratched and scuffed pretty soon. There is a USB Type-C charging port at the rear.

The earbuds are small and lightweight. They can fit most ears pretty comfortably. I had no issues using them for long hours. They have an in-ear-canal design, offering decent passive noise cancellation. The earbuds also feature an IPX4 rating for sweat and water splash resistance, but it’s a downgrade compared to the Realme Buds Q2’s IPX5 rating.

The earbuds have touch-sensitive controls, and you can change single-tap, double-tap, triple-tap, and touch-and-hold controls using the Realme Link app on the connected smartphone.

The earbuds are comfortable to use and offer good passive noise cancellation, but the case could’ve had a much better build. Competing truly wireless earbuds from the likes of Dizo, Jabra, JBL, OPPO, and Soundcore have better cases.

The Realme Buds Q2s use a Bluetooth 5.2 chip with support for AAC and SBC audio codecs. They have a bass-heavy audio tuning in the Balanced equaliser preset. You can select between Bass Boost+, Balanced, and Bright equaliser settings using the Realme Link app.

In the Balanced mode, there is a good amount of bass, but it’s bloated and muddy. The mids are muffled, and the highs are not crispy enough. The soundstage is pretty average and acceptable for the price.

In the Bright mode, mids are way better, and there’s still enough bass. However, the highs turn a bit sibilant (the S and T sounds become sharp and piercing). The overall audio also sounds hollow in this mode.

In the Bass Boost+ mode, the bass is extremely overpowering, and it affects every other sound spectrum. Even EDM lovers and bass heads would not like this equaliser setting.

I did not face noticeable delays while watching videos, but even in the Game Mode, I could notice latency while playing Apex Legends Mobile and Call Of Duty Mobile.

As mentioned earlier, the earbuds offer decent passive noise cancellation. It’s weird that Realme has removed ANC from the Buds Q2s, something that was present on the Buds Q2. The call quality is average for the price. Vocals can be understood without any problem, but they sound a bit robotic.

The Realme Buds Q2s feature support for the AAC codec, which allows for higher quality audio transmission compared to SBC. They also lack ANC, something that was present in last year’s Realme Q2.

They also lack wear detection sensors, so the music won’t automatically pause when you take the earbuds out of your ears. In the Game Mode, the Realme Buds Q2s have a claimed latency of 88ms.

The earbuds have an IPX4 rating, which is a step down from the Realme Buds Q2’s IPX5 rating. They can be controlled through the Realme Link app. They also support Quick Pair and Quick Play on Realme phones, but as they don’t have the Google Fast Pair feature, non-Realme phones won’t get to use the Quick Pair feature.

Realme claims that its new earbuds can last up to 7 hours individually and up to 30 hours with the case. However, these figures were tested with the volume set to 50%.

Most people might like to use these earbuds with around 70-80% volume, and with similar usage, the earbuds last around 5-6 hours. So, you can realistically expect around 20-25 hours of battery life with the case. Most people can expect them to use for a week or so on a single charge.

The case takes over two hours for a full charge, which is acceptable. It’s good to see that it has a USB Type-C port which makes charging convenient.

The Realme Buds Q2s are an average pair of truly wireless earbuds. They are very comfortable, but they sound bass-heavy. Some people might like it, but the audio tuning could’ve been more balanced. They also lack wear detection, and their IP rating is a downgrade compared to last year’s Realme Buds Q2.

The Realme Buds Q2s are an average pair of truly wireless earbuds. They are very comfortable, but they sound bass-heavy. Some people might like it, but the audio tuning could’ve been more balanced. They also lack wear detection and their IP rating is a downgrade compared to last year’s Realme Buds Q2.