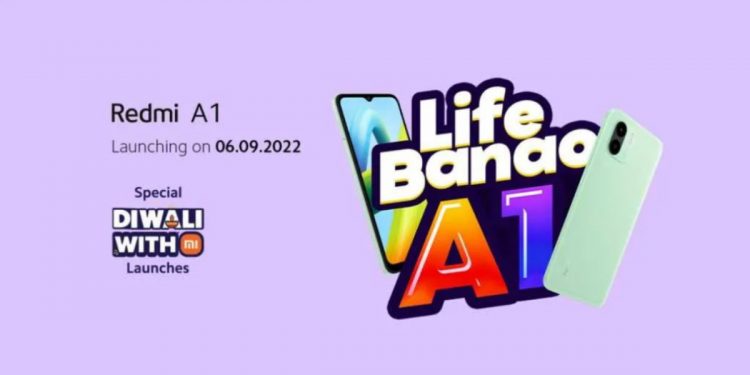 Chinese smartphone maker Xiaomi is all set to launch the Redmi 11 Prime 4G and the Redmi 11 Prime 5G in India on September 6, 2022. Alongside these devices, Xiaomi will be introducing yet another budget-oriented smartphone, dubbed the Redmi A1. The company took to Twitter to confirm the launch date of the Redmi A1. The teaser shared by the brand also reveals the design of the handset. Additionally, the device’s micro-site reveals some key details of the device ahead of launch.

The phone will pack a 5,000mAh battery unit. The device will have a leather finish at the back, a dual-camera setup, and a dual-tone LED flash. On the front side, the smartphone will feature a water-drop-shaped notch at the top of the display for the selfie camera. On the right side, the handset will have power and volume keys.

The smartphone will lack a fingerprint sensor, considering that it is seen nowhere on the images disclosed on the microsite. The other key features offered by the device will include 4G support, Wi-Fi, Bluetooth, GPS, and a speaker grill at the bottom.

Xiaomi is also rumoured to launch the Redmi A1 Plus in India alongside the vanilla Redmi A1 variant. However, as of now, the company has not revealed any details related to it. The Redmi A1 Plus was previously spotted on the FCC and IMEI database. The device was seen with the model number 220733SFG on the FCC. Furthermore, the listing also confirmed that the Redmi A1 Plus would feature a fingerprint scanner.

We can expect more details about the upcoming Xiaomi phones on September 6, 2022. Are you excited for the Redmi A1? Do let us know in the comments section below.