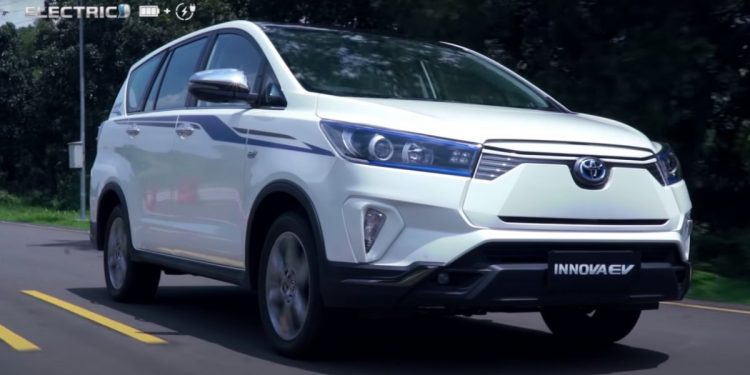 The Toyota Innova has been the favourite MPV (Multi Purpose Vehicle) in India ever since its launch back in 2005. After multiple facelifts and a generation change, it is known as the Innova Crysta in India, and still sells about 3,000 to 3,500 units per month. With the world moving towards the electrification of cars, Toyota Indonesia decided to experiment with an EV avatar of one of the best selling MUVs in its stable. It showcased the Kijang Innova EV concept at the ongoing Indonesia International Motor Show and looks forward to studying the market sentiment regarding EVs in the country.

The Toyota Kijang Innova (Innova Crysta in India) electric car retains the same design but gets some tweaks to differentiate it from the ICE counterpart. The front end gets a restyled grille which doesn’t get any air vents. The bumper is also redesigned. The headlights get blue accents and so does the Toyota logo, which signifies its EV credentials. The front skid plate is beefier, giving it a rugged appeal. Moving to the sides, you can see blue and grey decals running from the front fender to the rear quarter panel. The petrol filler is replaced by a charging port on this electric vehicle. At the rear, the tail lamps get clear lens treatment along with blue accents and the ‘Electric’ branding.

Moving to the interiors, the Innova EV concept looks like an aftermarket conversion and not a factory job. The gear lever has been replaced by individual buttons for Park (P), D (Auto), Reverse (R), and others that look shoddy. They didn’t even bother to replace the tachometer in the instrument cluster, which seems to be from a petrol-powered Innova as it goes till 8,000 RPM. The rest of the cabin looks similar to the ICE variant. The infotainment system looks like a 7-inch type that displays the battery level, range, modes, and other information.

The Innova comes with a ladder frame chassis like typical SUVs, which increases comfort on broken roads but also increases its weight compared to a car with monocoque chassis. Adding batteries to such a vehicle must have further increased its weight by some margin. However, the details about the battery capacity and the powertrain haven’t been revealed yet. The Innova is well-known as a comfortable mile-muncher. Will its EV avatar provide the necessary range? Would a 400-500km of real-life driving range be enough for such a vehicle? Let us know your thoughts on it.