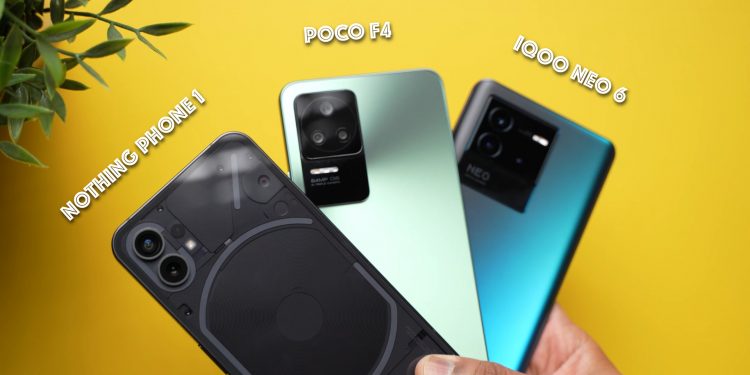 Nothing recently unveiled its first-ever smartphone, dubbed the Nothing Phone (1). The mid-range segment the Nothing Phone (1) has been placed in is a fairly competitive one, and there are plenty of smartphones to choose from. While competition is a good thing, it might eventually lead to a fair amount of confusion for the end customer, as it could become difficult for them to decide which device to buy.

To make things easier, we have compared the Nothing Phone (1) with the likes of two of the most popular smartphones in this segment, the POCO F4 5G and the iQOO Neo 6 5G. We have compared them with respect to their pricing, specifications, and features, which will help you decide on the best smartphone.

In terms of pricing, the Nothing Phone (1) could turn out to be slightly costlier. The POCO F4 and the iQOO Neo 6 turn out to be the more economical options among the three.

The Nothing Phone (1) features a rather unconventional design with a transparent back and a unique Glyph interface. The LEDs at the back sync with the music that is being played (here’s how to enable this feature), light up during incoming calls/notifications, act as a battery charging indicator, and will do probably more in the future.

The POCO F4 and the iQOO Neo 6, on the other hand, come with slightly safer design choices, save for the new Orange colour variant of the iQOO Neo 6, which could be deemed, well, funky. Another thing which sets the Nothing Phone (1) apart is the presence of a metal chassis, while its competitors make do with a plastic frame.

While the design is subjective, we would hand it to the Nothing Phone (1) for trying to break the monotony and bringing about a refreshing design.

The Nothing Phone (1) features a 6.55-inch flexible OLED panel with Full HD+ resolution, Corning Gorilla Glass 5 protection, and a 120Hz refresh rate. All three smartphones have Full HD+ resolution and a 120Hz refresh rate, but the iQOO Neo 6 comes with a slightly larger 6.62-inch AMOLED panel and sits right in the middle, as the POCO F4 5G features the largest display among the lot, at 6.67-inch.

All three displays are fairly bright and punchy, but the iQOO Neo 6 display turned out to be the best when it comes to outdoor visibility. The iQOO Neo 6 and the POCO F4 5G feature a centrally-aligned cutout for the selfie camera, while the Nothing Phone (1) has a left-aligned single punch-hole cutout. All three punch-holes are fairly minimal, and while a central alignment makes the phone’s display look symmetrical, a left-aligned punch-hole makes the landscape orientation usage a tad more immersive.

Nothing Phone 1 vs. POCO F4 vs. iQOO Neo 6: Performance And UI

All three smartphones feature decent mid-range processors, but the iQOO Neo 6 and the POCO F4 5G come with a Snapdragon 870 chipset, which is one of the most stable chipsets currently available in the market. Plus, both devices come with dedicated game modes, which might come in handy for those who want to play a lot of games on their smartphones. The Nothing Phone (1), on the other hand, is powered by a Snapdragon 778G+ processor, which in itself is a fairly potent chipset.

While all three devices give an almost identical battery backup and will provide you around 5 to 6 hours of screen-on time, it’s the charging speed wherein the iQOO Neo 6 excels.

Nothing Phone 1 vs. POCO F4 vs. iQOO Neo 6: Camera Performance

Coming to the front cameras, the iQOO Neo 6 produces more detailed selfies, while the POCO F4 selfies are a bit too sharp. The iQOO Neo 6 performs better than the other two smartphones even while taking selfies in poorly-lit conditions.

As a matter of fact, we have made an in-depth camera comparison of all three smartphones on our YouTube channel. You can check out our video so that you can get a better visual understanding of how the cameras of all three phones perform.

Nothing Phone 1 vs. POCO F4 vs. iQOO Neo 6: Which Phone Should You Buy?

While all three smartphones come with the bang-for-your-buck USP, there are a few subtle differences, which set them apart. The Nothing Phone (1) has an impressive display, a very reliable camera experience, a near-stock Android experience, and a unique design.

The iQOO Neo 6, on the other hand, has a pretty good camera of its own, a very bright and punchy display, 80W fast charging, a subtle design, and a good processor. The POCO F4 5G runs on a tried-and-tested processor, and has a very good display, but falls short when it comes to the camera performance and the design.

For those looking for a device with good build quality and a good camera, the Nothing Phone (1) could be an easy choice. For those wanting to buy a smartphone with reliable performance at a lesser price, the POCO F4 5G is the one to go for. Lastly, the iQOO Neo 6 could suit those who want a very good display, stable performance, and a subtle design.

By the way, which smartphone amongst the ones that we compare is your favourite? Let us know in the comments section below.